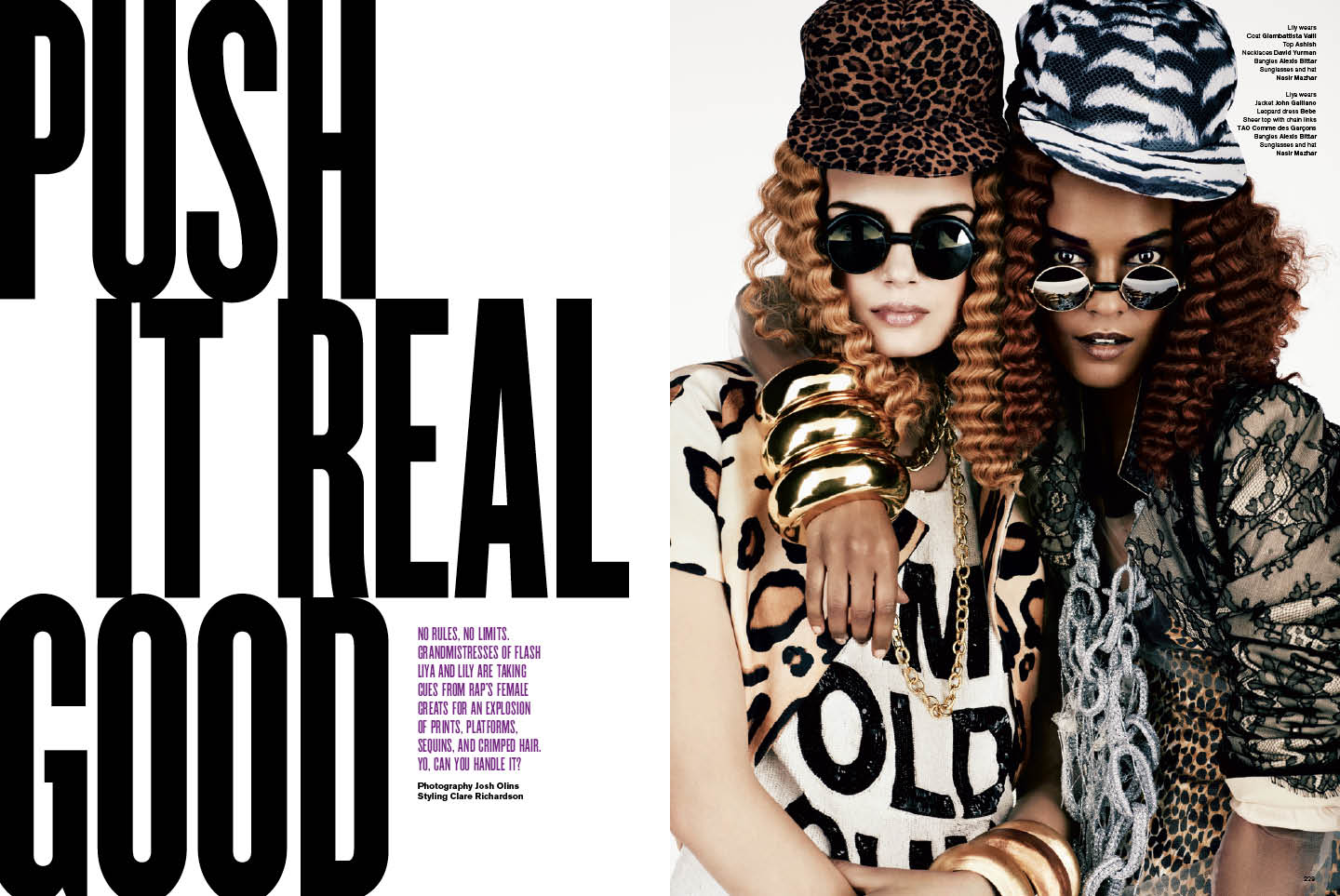 I’m sure you guys have already seen this already…but I just love this!  I am such a Child of the 80’s.LOL

In the March issue of V MAGAZINE (#64), we are treated to this colorful, graphic, 80’s-inspired style spread with two of fashion’s most famous faces.

From the press release:

Inspired by the famed hip-hop girl group Salt-n-Pepa, this 10-page fashion spread showcases the style that helped propel the female act to fame in the 80’s and 90’s. 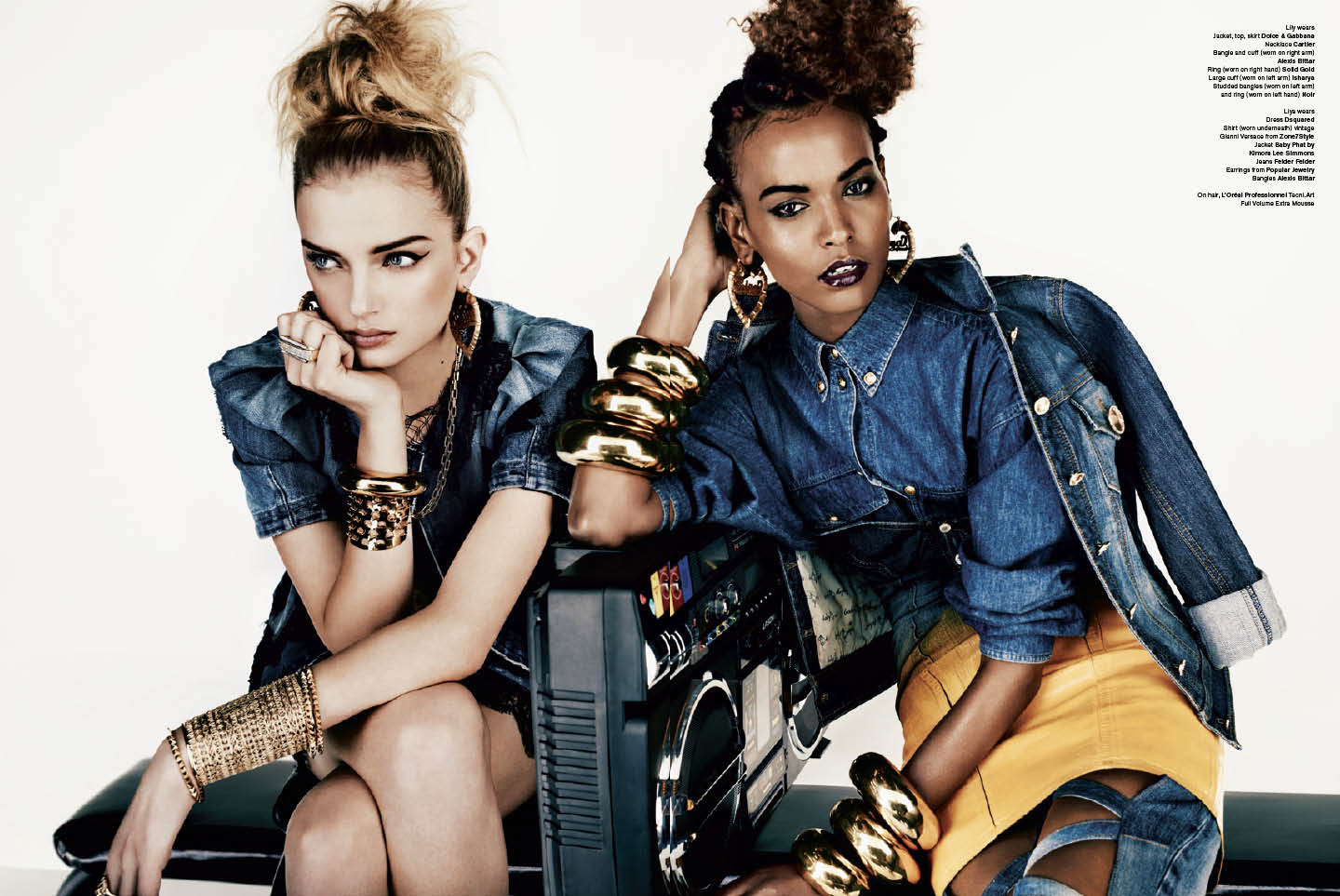 No rules, no limits. Grandmistresses of flash Liya and Lily are taking cues from rap’s female greats for an explosion of prints, platforms, sequins, and crimped hair. Yo. Can you handle it?

So colorful. So nuts.  And brimming with ideas for DIY – albeit requiring a little toning down.;-)  Those yellow platform sneaks are reDUNKulous. 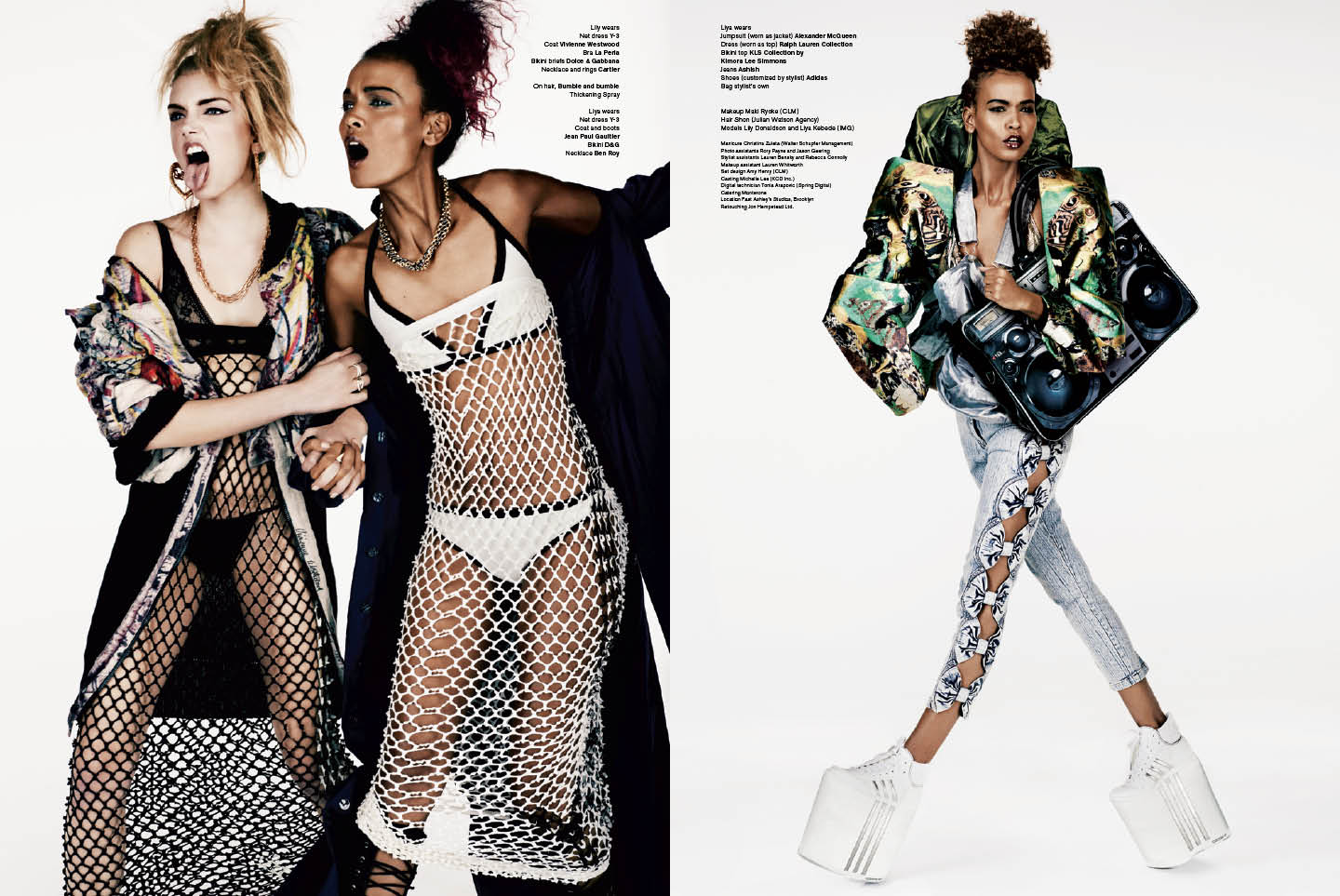 How do you guys respond to this?  Is it bringing out the 80’s gal in you?
xoxox
Carly

END_OF_DOCUMENT_TOKEN_TO_BE_REPLACED 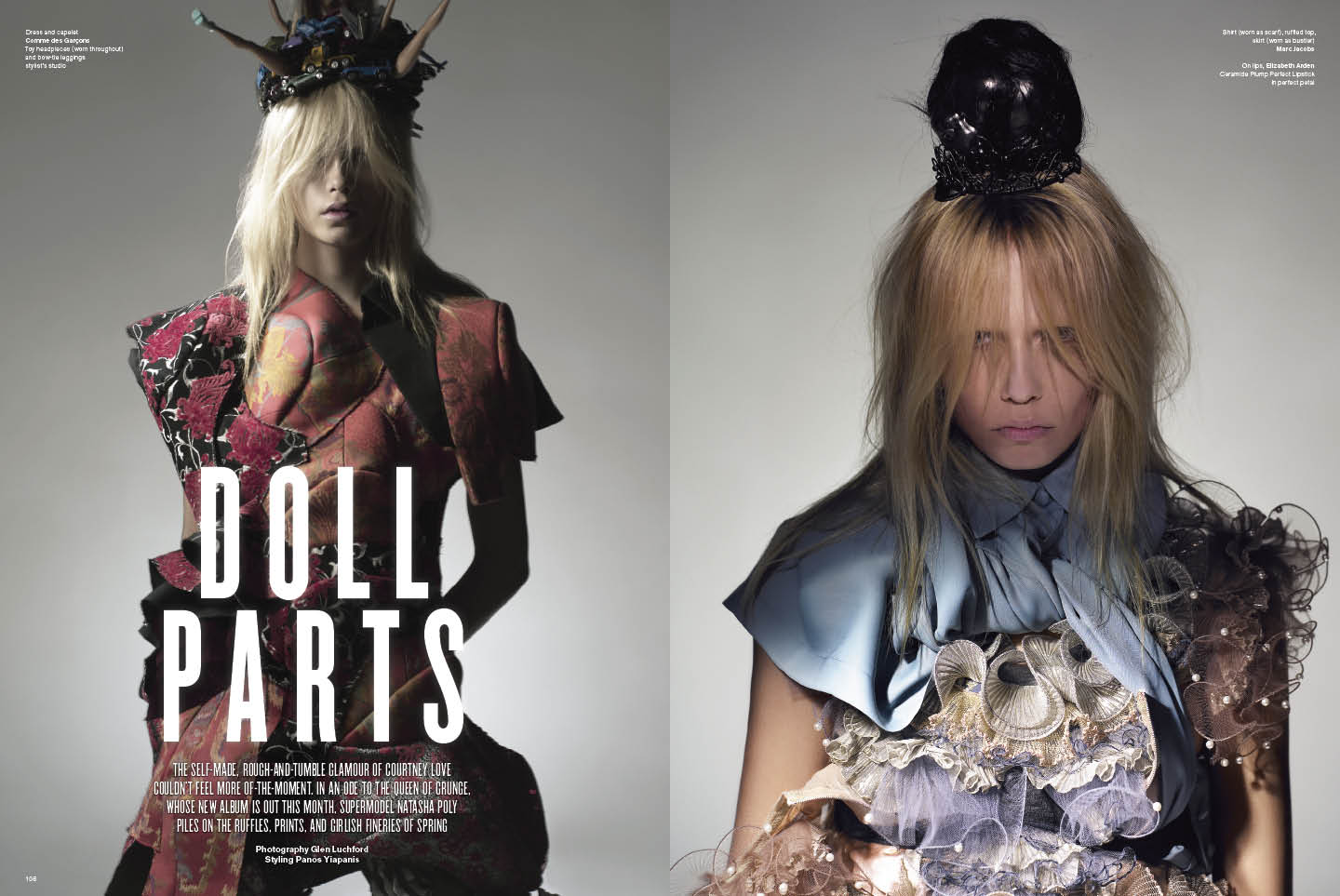 Natasha Poly, shot by Glen Luchford for the upcoming V MAGAZINE (issue #63). Inspired purely by Hole front woman Courtney Love, Natasha sports textured bustiers, kilts, petticoats and headpieces constructed of toys throughout the spread. Although the release date has yet to be announced, “Nobody’s Daughter,” the fourth studio album by Hole, is set for release later this month. V63 does not hit newsstands until January 14, 2010. 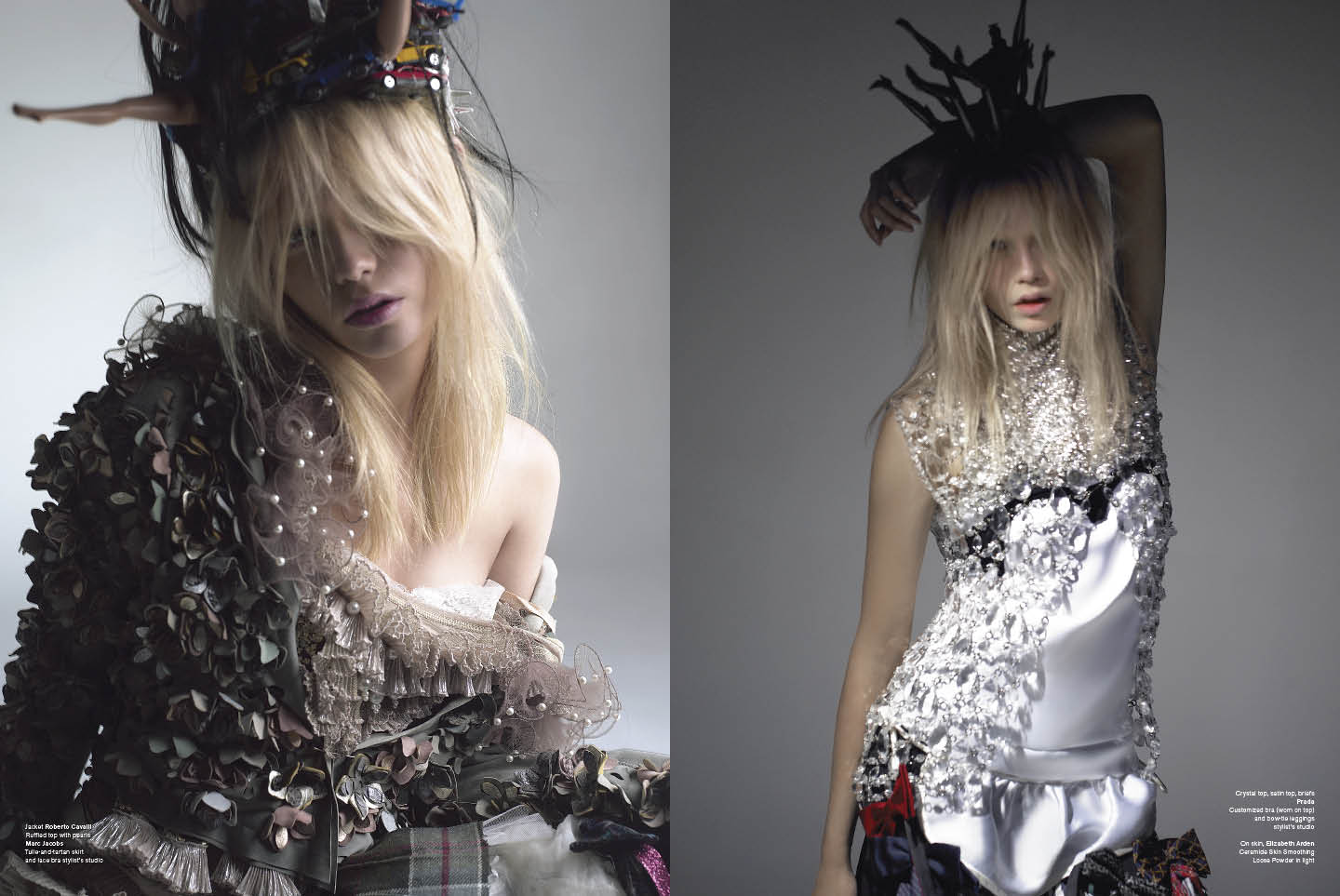 The self-made, rough-and-tumble glamour of Courtney Love couldn’t feel more of-the-moment. In an ode to the queen of grunge, whose album is out this month, supermodel Natasha Poly piles on the ruffles, prints, and girlish fineries of spring

I’m not sure I agree that Courtney Love’s “rough-and-tumble” is any more “of the moment” than it was when she first rose to fame (I personally love the deconstructed mish-mash that is her “look” most of/some of the time) but I find it amusing that after being a media pariah for so long she’s now being featured again in a spread…well, sort of. Her style is being featured, that is. I wonder why Natasha Poly is playing her rather than Courtney appearing herself? (Maybe an attempt to fashionize someone whose actions are just too controversial for glammed-up photos anymore? An attempt at iconography whereas the musician and paparazzi train wreck that we’re all familiar with defies iconic status and in fact, doesn’t really have a singular style?)

I don’t know, but I’m getting a lot of great DIY ideas just looking at this spread. And Jo-Ann’s sells pre-pleated and ruffled cotton trim – so just think how simple it would be to sew that on to the bodice of a dress like the right one in spread #3! And a crown…made of doll legs. Somewhat disturbing, but yes – this says Courtney Love!

What do you guys think of the spread?
-Carly J. Cais

END_OF_DOCUMENT_TOKEN_TO_BE_REPLACED 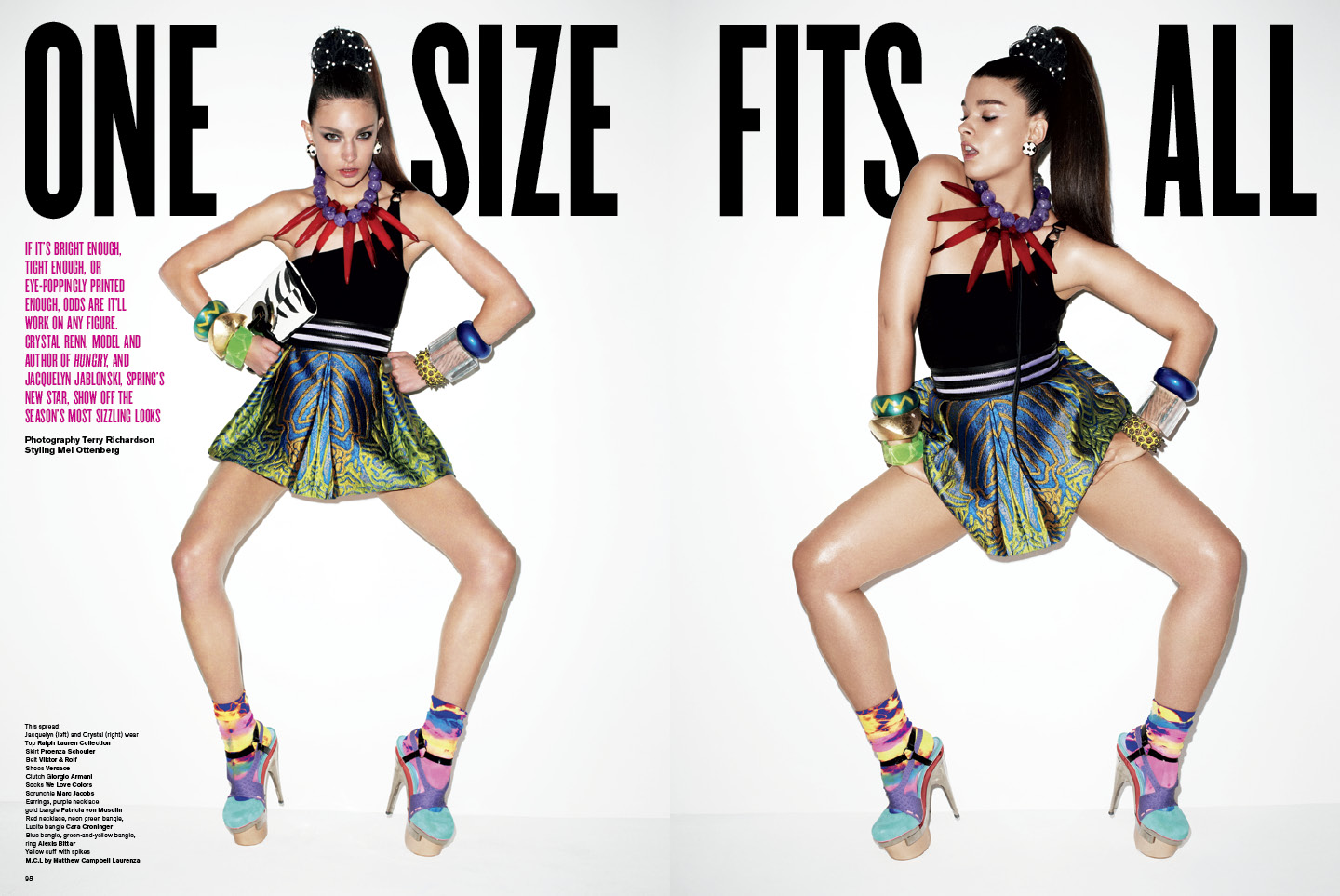 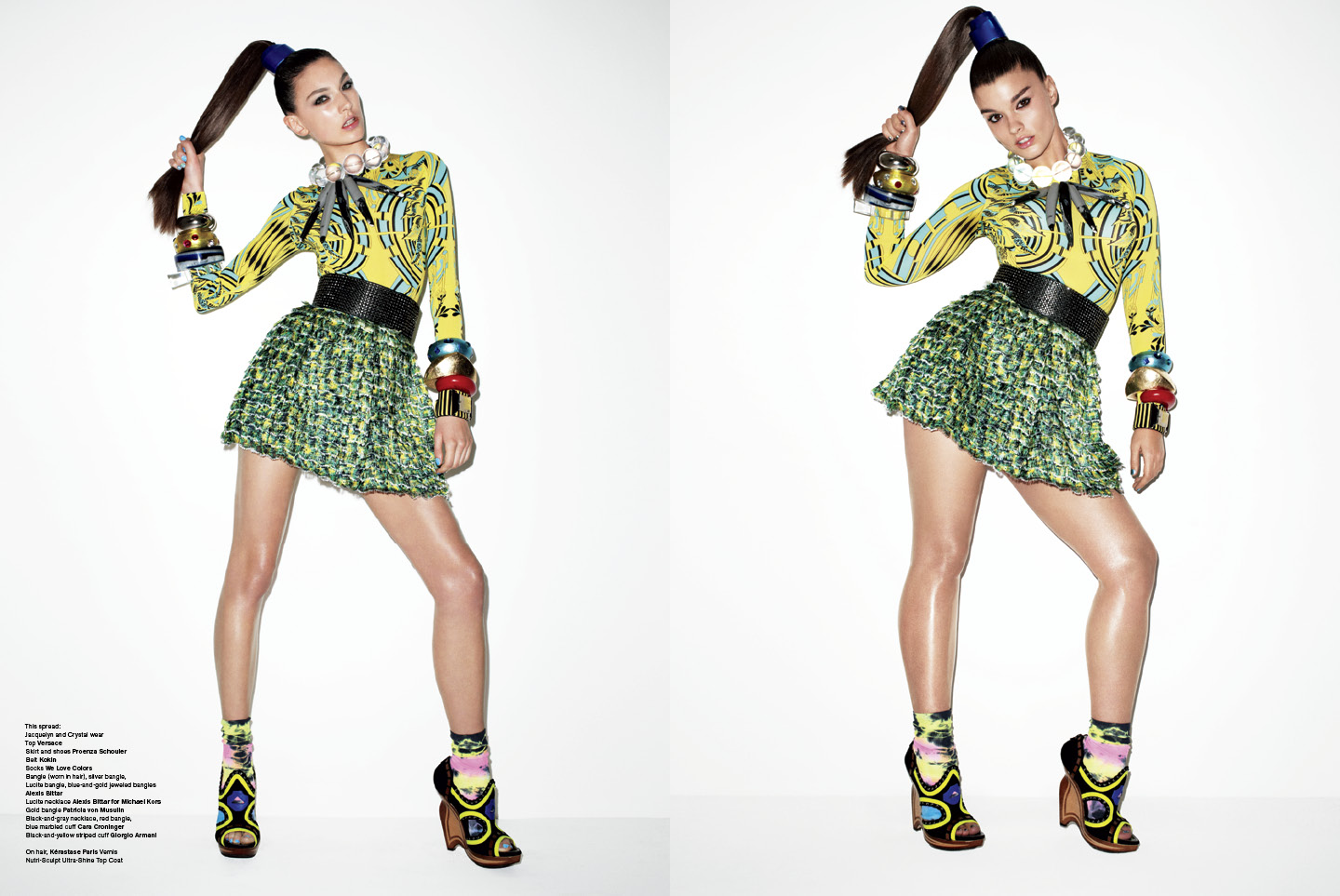 In case you are interested, the models’ measurements are as follows:

On first glance, I thought they did this shoot with only Crystal – then photoshopped her skinny to create the left photo – I honestly didn’t think they were 2 different people at first!

It’s interesting to note that they are both the same height – but to me, Crystal looks shorter. I guess the skinnier you are, the taller you look. But it’s just an optical illusions! (Is it just me? Maybe it’s just me.) Plus, Crystal’s bust size is only 4″ larger than Jacquleyn’s….but her waist AND hips are 7″ larger. Strangely, she doesn’t look it – in fact, she just looks proportionately larger overall, not just larger in the waist/hip area.

I think they both look pretty smokin’ and high-fashion…and for me, it also took a moment to realize that the two girls are two different sizes since everything else is so similar in the shoot. 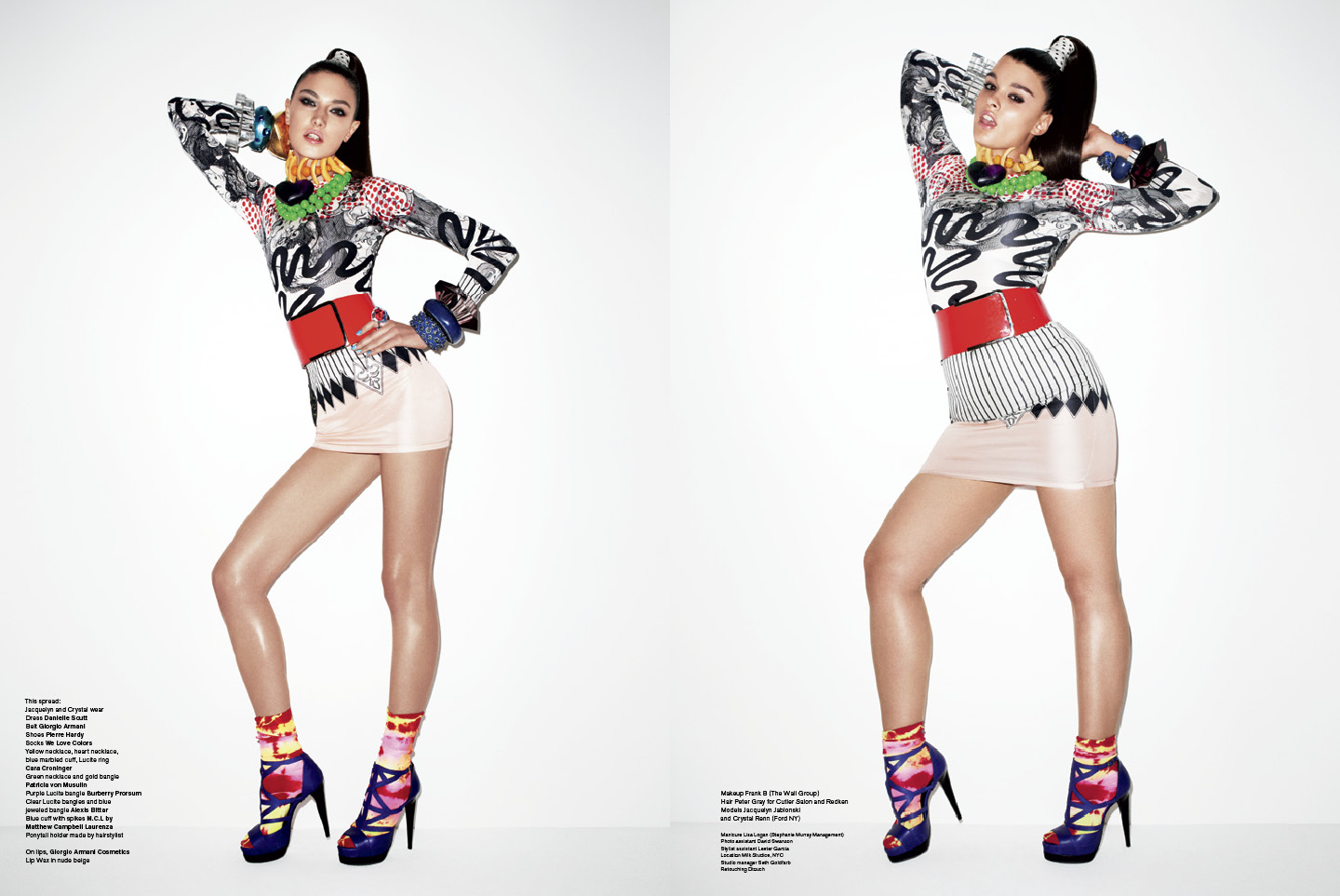 One of the reasons why Crystal Renn is so successful as a “plus-size” model is that she is proportionately plus-size…i.e., her weight is distributed throughout her body evenly and isn’t bunched up in one place (unlike the majority of us when we gain weight…most gain it in a couple places, not evenly throughout) and this, I think, visually makes her appealing. (I think that the human attraction to symmetry and proportion trumps the human attraction to skinniness every time.) She looks toned and fabulous & I’m not saying she is fat or anything – she just looks a little larger overall than the model on the left.

I can’t wait for her book, Hungry: A Young Model’s Story of Appetite, Ambition and the Ultimate Embrace of Curves

to come out in paperback so I can snag myself a copy!

So what do we all think? (I think it licks the Glamour Magazine November 2009 Issue plus-sized model spread into a cocked hat, personally.) High-fashion vs. nakedness?? More please!

END_OF_DOCUMENT_TOKEN_TO_BE_REPLACED 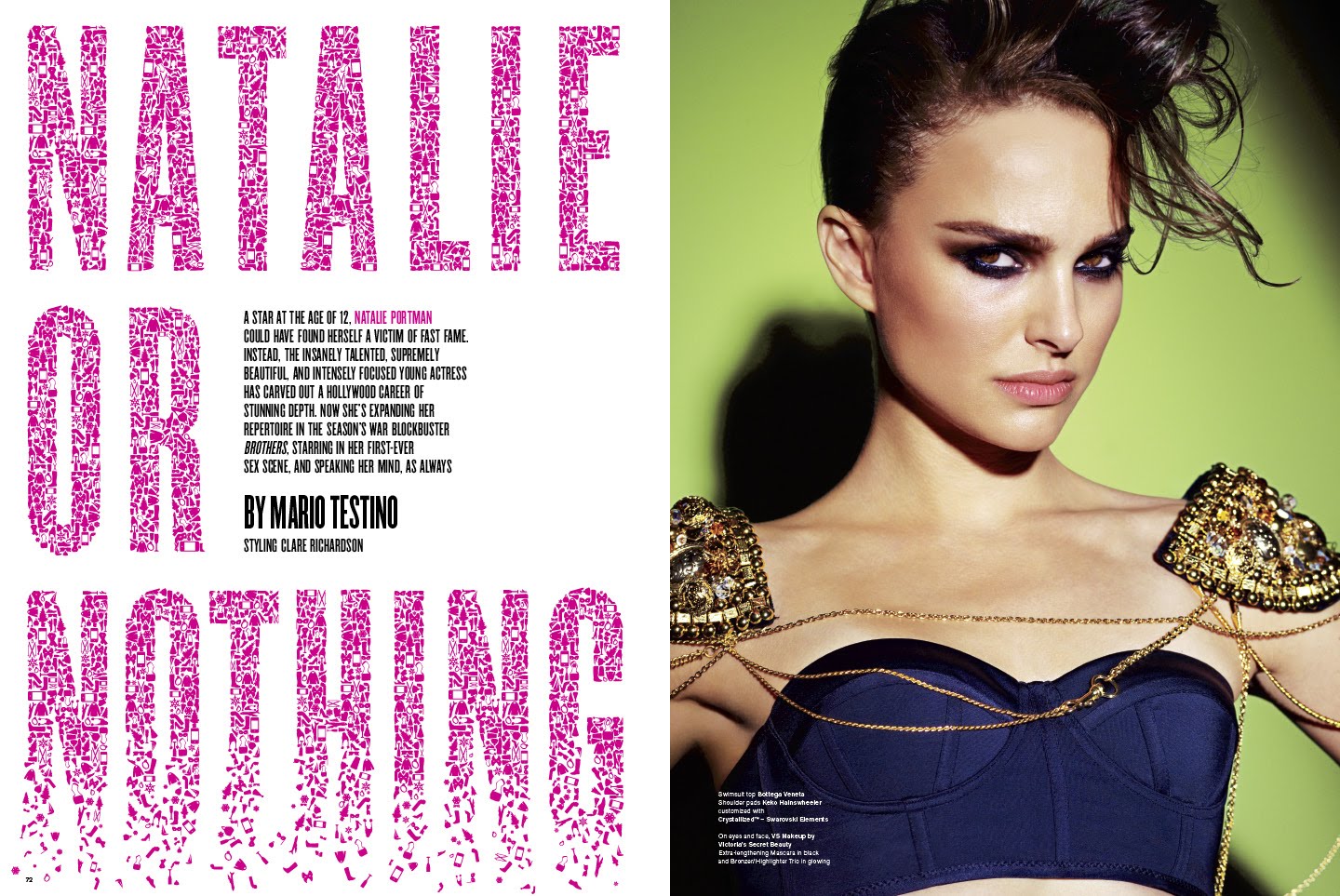 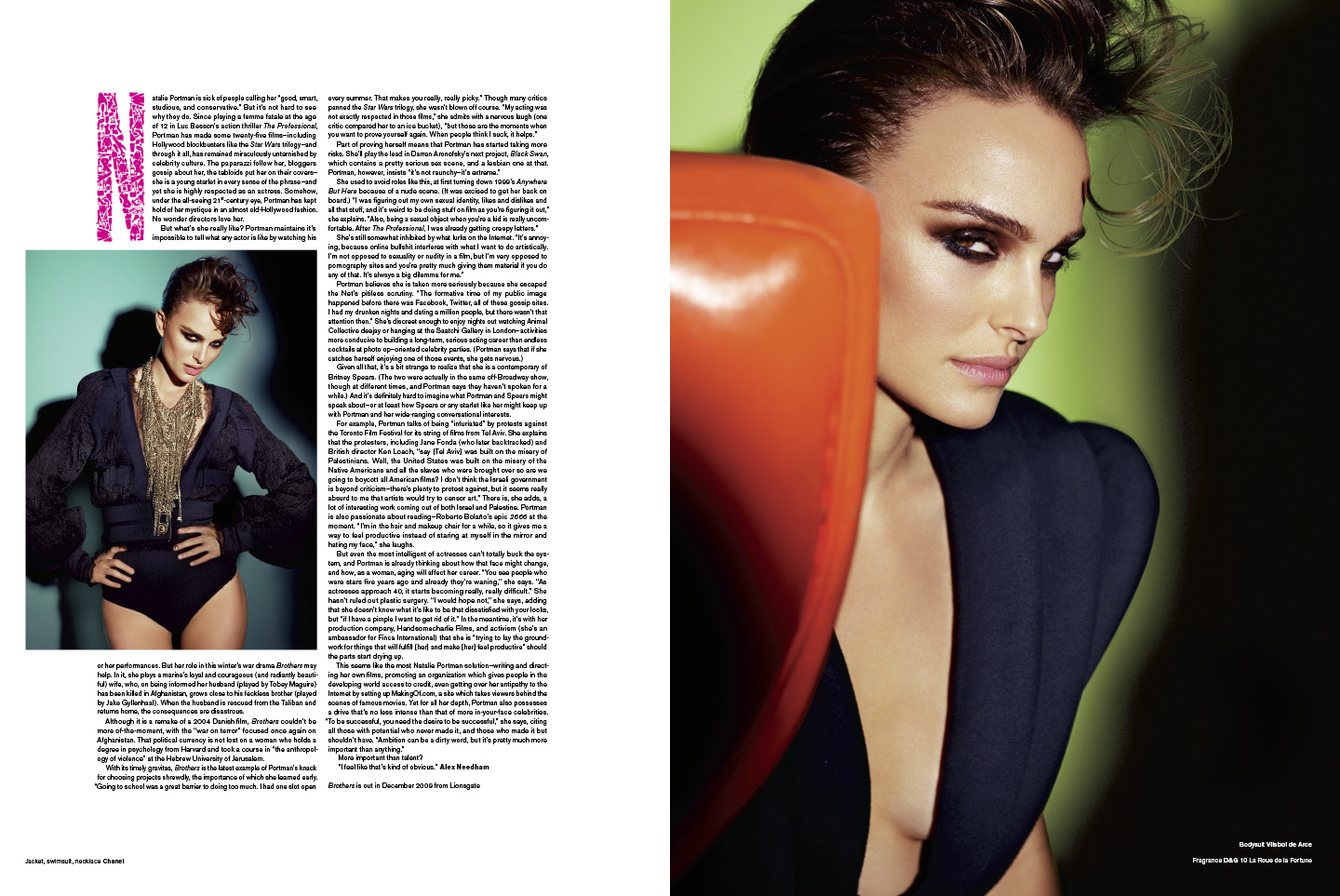 Another V Magazine spread for ya! (It published yesterday, so I’m a little behind…sorry.)

Natalie Portman was shot by Mario Testino for issue #62 of V Magazine, winter 2009/10 which hits newsstands today. She wears Calvin Klein Jeans with crystallized Swarovski elements on the cover. Claire Richardson styled her and the shoot took place in London. Natalie appears sexy androgynous and tough with her “pompadour” hairstyle.

A star at the age of 12, Natalie Portman could have found herself a victim of fast fame. Instead, the insanely talented, supremely beautiful, and intensely focused young actress has carved out a Hollywood career of stunning depth. Now she’s expanding her repertoire in the season’s war blockbuster “Brothers”, starring in her first-ever sex scene, and speaking her mind, as always.

Now I don’t what they’re talking about with the Calvin Klein jeans reference (must be in some other photos) but I am D.I.YING over her jewel-encrusted shoulder-thingies. Not sure where I would wear them, though!

What do all of you think? Is she fierce and fabulous? Or is it the stylist that is? 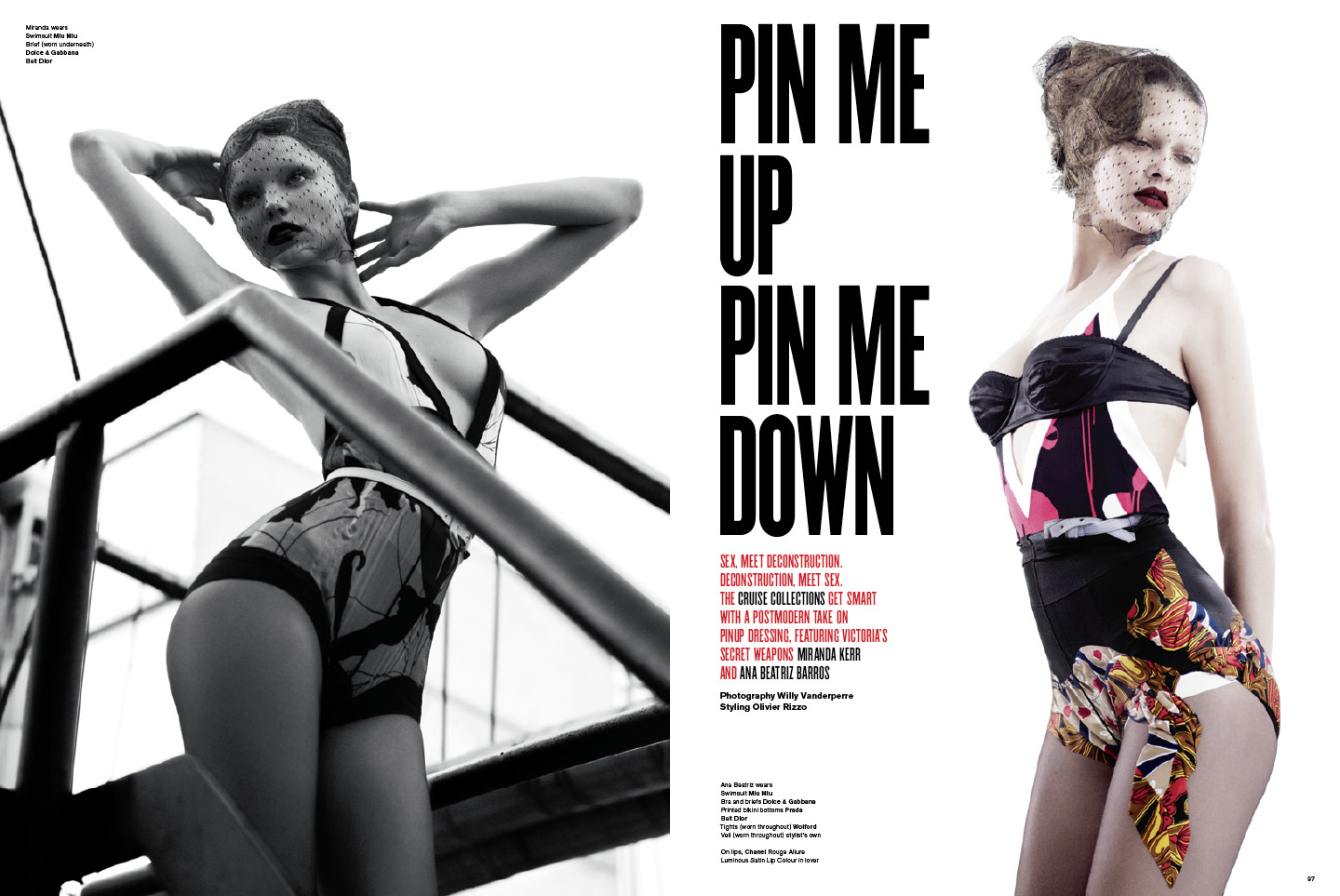 The theme of the story is sort of “postmodern pinup,” a subversive take on sexy, courtesy of Olivier Rizzo. Miranda Kerr is best-known for being an Australian supermodel, the girlfriend of actor Orlando Bloom and a Victoria’s Secret angel. 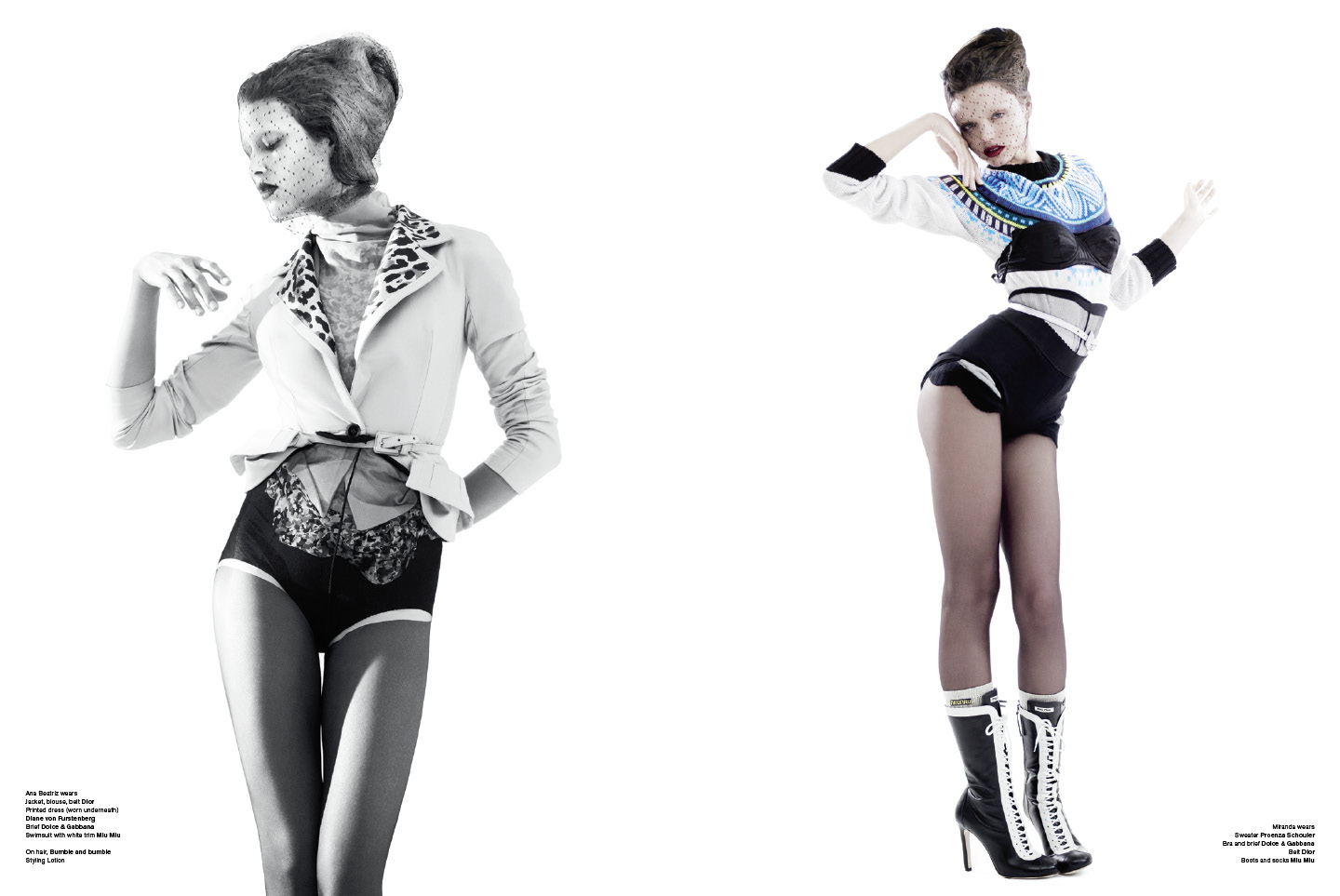 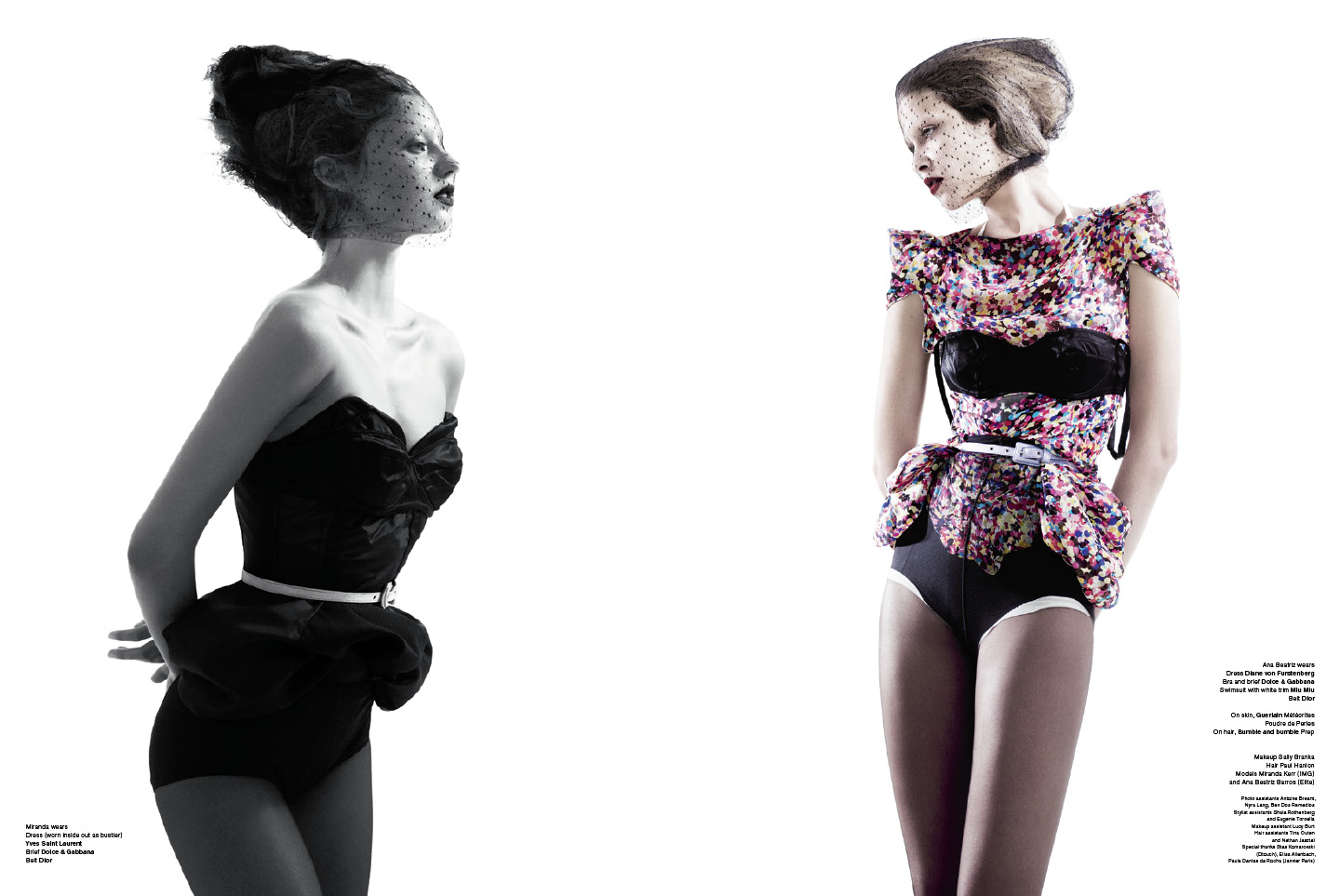 Don’t you just love the idea of wearing lingerie over a one-piece bathing suit and a sweater??