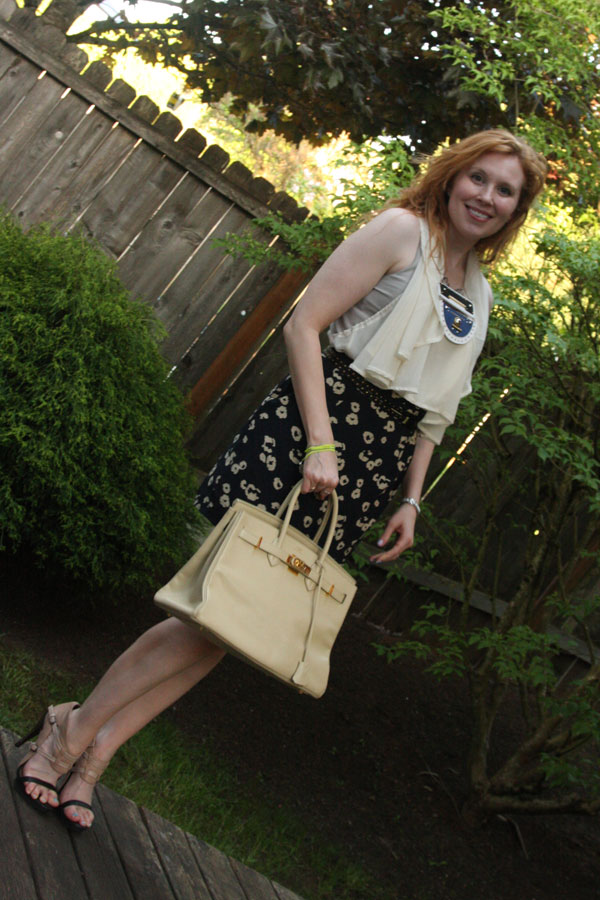 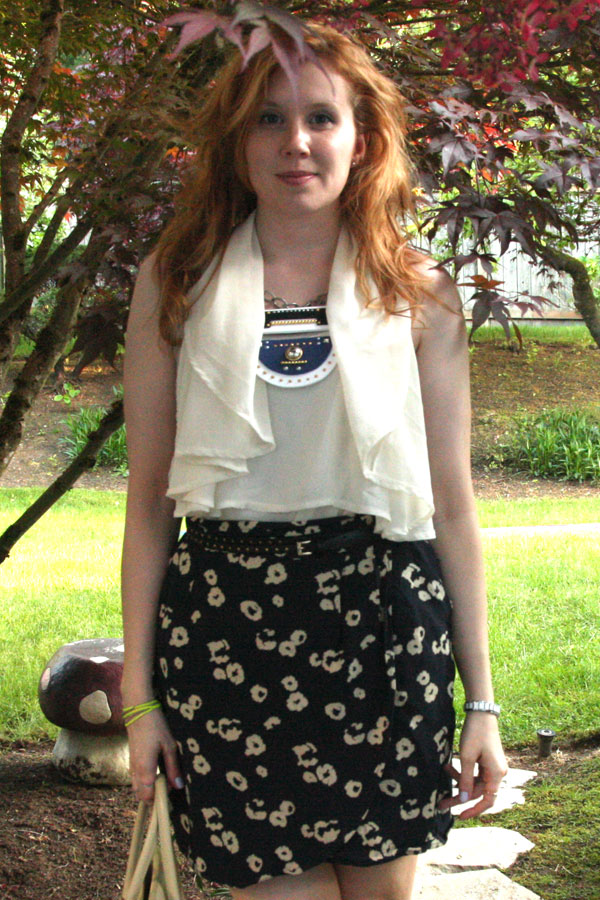 The weather turned super-warm this weekend so I draped myself in chiffon and neutrals. 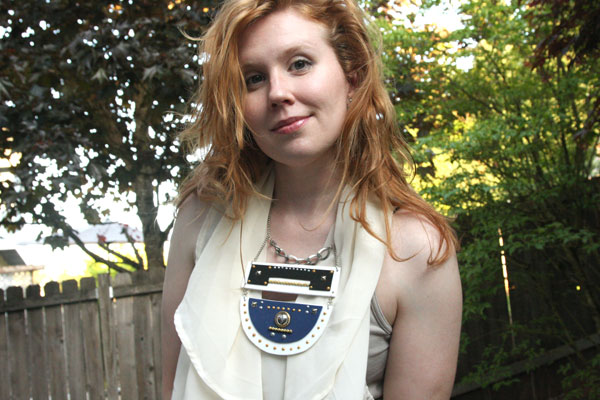 I thought to offset all the neutrals with my DIY Mixed Media Bib Necklace, which I received a lot of compliments on. 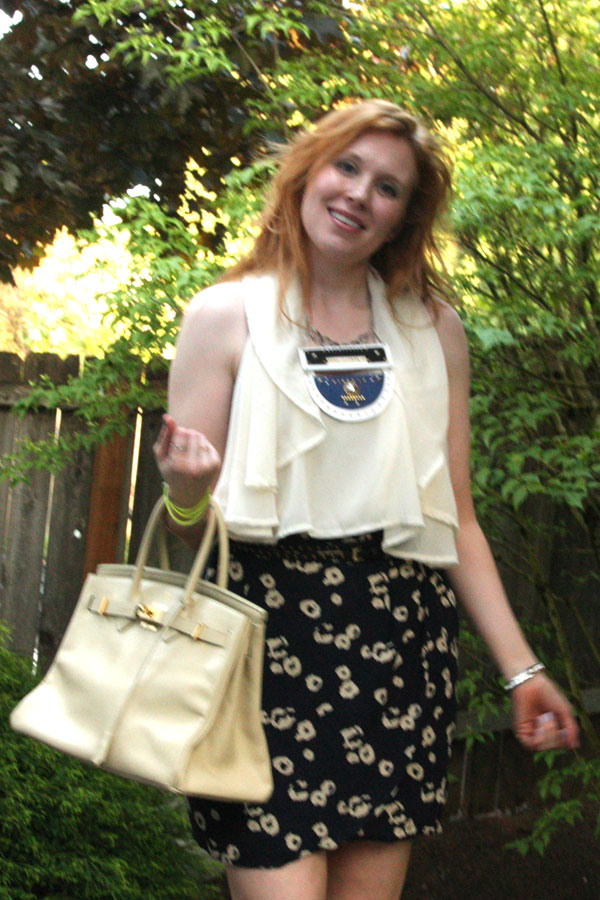 My latest thrifted Goodwill find: I couldn’t believe this tulip skirt with lovely print was a mere $4.99…and was exactly my size! 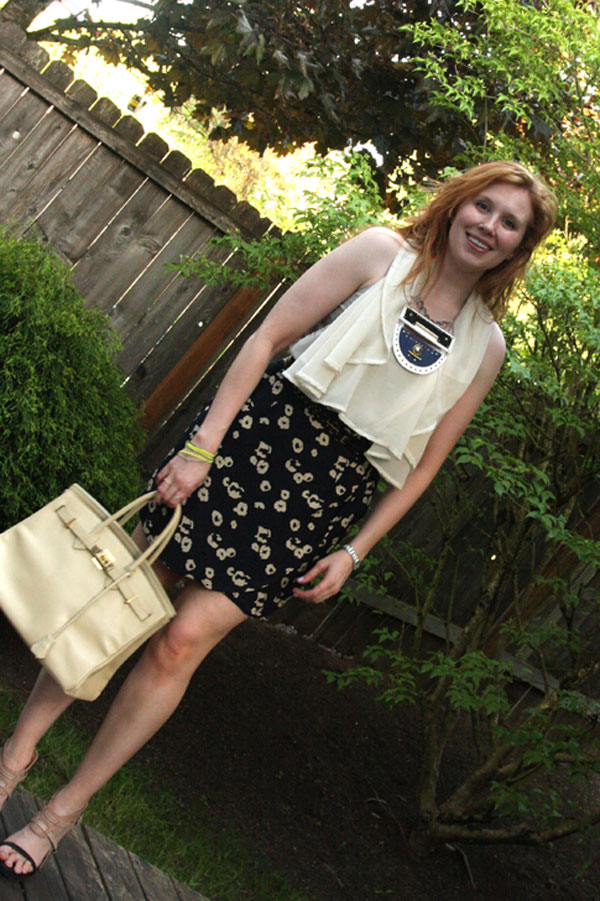 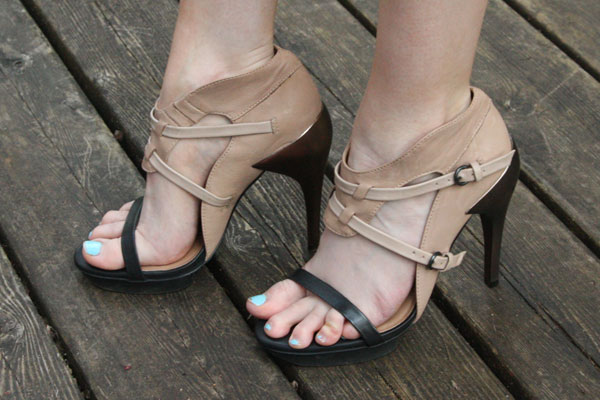 I paired the skirt with my Rho heels I bought with an All Saints gift card I won last year in a ShopItToMe giveaway (seriously, they have giveaways often on their blog [as well as daily sale alerts]; you just have to sign up for their newsletter and pay attention to their blog and enter!!  Usually the odds are pretty good and you may walk away with something great…I won a $300 gift card to AllSaints.com and was so thrilled!!).  I hadn’t had a chance to try these sandals out, and was so surprised…they are the most comfortable heeled shoes I’ve ever worn, hands down.  When it comes to high heels, quality definitely makes a difference!  The padding, the curve to the arch, the foot support…it’s amazing.  I can’t say enough good things about them!  (Except for the price, which I would have usually found out of my budget, but they were on sale and I had to use up that gift card all in one go…) 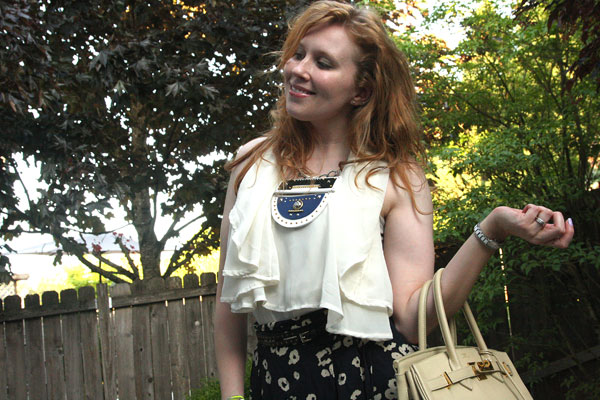 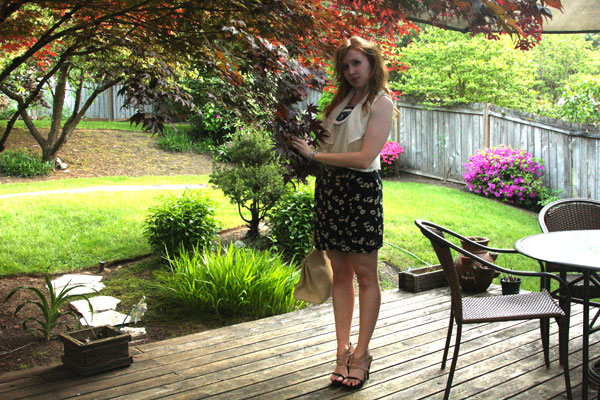 I’m terribly morally conflicted about this bag.  It’s not a real Birkin; it’s actually from my mother-in-law.  She used it for awhile and got tired of it so gifted it to me.  She said she had been on a waiting list for years for a real Birkin, and had gotten impatient and so had looked for a fake version in the meantime.  She was thrilled to have found “an excellent replica” (her words) for a mere…

And then once she got the real Birkin she decided to give the knockoff one to me.

On the one hand, it’s a gift from my mother-in-law, in good condition, and a serviceable bag.

On the other hand, it was $1200 and a blatant knockoff, which I’m morally opposed to.  I like to encourage people to make their own versions of designer stuff, for themselves, on a personal basis…which I feel is different from producing exact replicas and selling them as “affordable versions of the real thing.”  Not only does the mass production of exact knockoffs hurt designer sales (though yes, the luxury brands aren’t impacted that much), but it also often employs underage and exploited workers, evades taxes, encourages money laundering, and supplies funds to international drug cartels, firearms rings, terrorist activities [like the 1993 World Trade Center bombing] and prostitution.  See here and here for two interesting discussions regarding this. 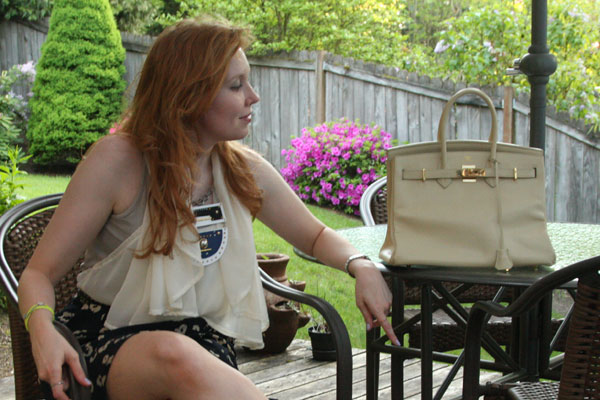 So what am I to do with this bag???  By using it am I condoning this sort of activity?  By not using it am I being inconsiderate towards my mother-in-law and her gift?

What would you do?

Also: Most of the above photos were taken by my 6-year-old son Lil Tot, which is why they are off-kilter and blurry, LOL!  He is actually beginning to get interested in photography and has begun “helping” me photograph my outfits!