Idle Pastime: In Off Hours, Truckers Pick Up Stitching With Less to Haul, Drivers Try New Hobbies; Quilting in the Cab 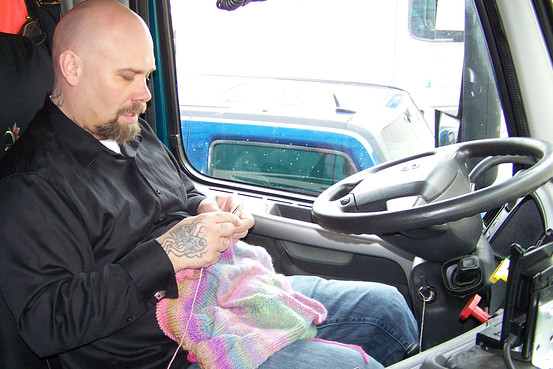 Kevin Abraham-Banks, a Sioux Falls, S.D., trucker, likes to knit while passing the time on the road. Here he makes a sweater for his wife. photo: Gretchen Abraham-Banks

I’m sure you guys have probably seen this already…but I thought this was super-cool!

WALCOTT, Iowa—Semi driver Dave White happily sequestered himself in his rig at a truck stop on a rural stretch of Interstate 80, waiting to pick up his next haul: 45,000 pounds of Spam. He used to loathe the downtime in his job.
Then, he bought a sewing machine.

Since last year, when the economy left drivers with fewer hauls, Mr. White, a 6-foot-2, 240-pound ex-Air Force mechanic with a bushy mustache, has hunkered down inside his truck in his many off hours, making quilts from patterns with names like “Meet Me In Paris.” When he’s not sewing, he’s daydreaming about it, he said as he ran a square of yellow cotton with little violets through his machine. “Oh, there’s many a time you’re just going down the road at O-dark-thirty in the morning and you just start thinking about a particular pattern.”
Some truckers are finding themselves with more spare time on the road. Loads of goods delivered by truckers fell 15% in 2009, to 170 million loads, the largest drop in modern history, said Bob Costello, chief economist for the American Trucking Associations. That came on top of a slow downswing in hauls because of what the industry laments as “miniaturization” of goods: It takes less space to move flat-screen TVs and iPods than their clunkier predecessors.
With declining freight, truckers who drive hundreds of miles to make a delivery may not immediately have a load lined up for the return trip. So they bide time at truck stops, where they can shower, dine and sleep in their rigs. A couple of years ago, a driver might drop off a load and pick up a new one in two hours; now the wait can be two days, said Mr. Costello.
Though evidence is anecdotal, industry groups and trucking-company owners say the increase in spare time has spawned more hobbies. “We’ve got guys who are into opera, photography, skydiving,” said Norita Taylor, spokeswoman for the Owner-Operator Independent Drivers’ Association, a truckers’ group.
Mr. White’s employer, Iowa-based Don Hummer Trucking Corp., last year started a loosely organized “sewing club,” and encourages drivers who are nimble with a needle to show off their handiwork at headquarters. “We want them to pass the time to make themselves happy, rather than get frustrated waiting,” said Dena Boelter, Hummer’s human-resources manager, an avid sewer who calls the hobby a great stress reliever that can be done almost anywhere.
Kevin Abraham-Banks, a 37-year-old trucker with a shaved head and dragon tattoos, passes time at truck stops with his cocoa and knitting.

Mr. Banks, who lives in Sioux Falls, S.D., and hauls romaine lettuce between California and the Midwest, learned to knit last year after load-volumes slowed. Creating something tangible beats sitting around the truck stop “talking about who has a bigger radio,” he said. He’s finished a scarf and socks, and is working on a sweater for his wife.
“The fact that you can take strands of thread and basically make something out of it, that’s awesome I think,” he said. “It’s pretty cool stuff, man.”
Still, trucking can be a macho world that doesn’t feel conducive to knitting or sewing. Some 95% of truckers are men, said the ATA. At the Iowa-80 Truck Stop, whose signs bill it as the “World’s Largest Truckstop,” a top request at the theater is for “Smokey and the Bandit” and the on-site dentist, Thomas Roemer, often sees drivers only after they’ve tried to yank their teeth out themselves. Crafting with fabric and yarn is “nothing I would do—my mom does that,” said Mark Sanchez, 47, a long-haul trucker.
Thomas McConnaughy, a married grandfather from Hemet, Calif., hauls cereal, reads his Bible, plays Sudoku, and talks trout fishing at truck stops. He doesn’t let on to other drivers that he keeps 15 coils of yarn in his cab and makes what he describes as “really cute slippers.”
“In the truck stops, it’s usually a bunch of guys watching football,” he said. “If I sat down with my knitting, I think there would be some funny remarks.”
Mr. White, the quilter, who is 53, came to his new passion last summer after feeling he was wasting time “waiting on freight.”
He drove 2,600 miles a week on average in 2009, versus 3,200 in 2008, even though he spent the same amount of time—about three weeks at a stretch—on the road.

He struggled to find a hobby, having burned out on reading. He tried carting along a remote-controlled helicopter, but it kept falling on him from a shelf in the truck. His wife, Dee, an accountant at their home in Colorado Springs, Colo., is a quilter and suggested he try it. By August, they had outfitted his truck’s sleeper cabin with a $179 sewing machine, supplies, and a starter’s pattern. “Boy, let me tell you, I created a monster,” she said.
Since then, Mr. White has made seven quilt tops, which are finished with a filling and backing between trips. He spends three hours a day on his hobby, sitting on his bed, with his sewing machine next to his mini-fridge. Flowered “project boxes” sit next to neat stacks of blue jeans and baseball caps. Quilting, he said, “gives you a little bit of ownership. You’ve actually accomplished something with your time off.”
He pulled over once to visit the National Quilt Museum in Paducah, Ky., and if time allows, visits fabric stores in towns he rolls through.
In his truck, he showed a quilt with illustrations of fruit, and emphasized the importance of strategically placing quilt blocks so that “you don’t get three lemons in a row or two plums in a row.”
His blue eyes widened behind his glasses as he moved to the topic of thread. “There is a variegated thread that goes purple to white then back to purple,” he said. “Oh! Just beautiful.”

from the Wall Street Journal