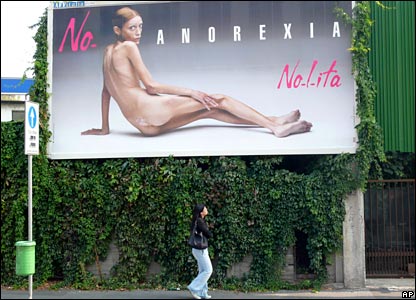 Verbmodels has decided to ban super-slim models and actors from its roster, joining growing global ambitions to fight eating disorders such as anorexia.

On the afternoon of October 11, Verb’s senior booker & Israeli entrepreneur Matan Uziel (24) who is best known for creating the advertising corporation Warmhome Media Group, held a press conference and answered questions on suspected anorexia nervosa and bulimia on models, rapidly weight losing, what brings a model to do that, as well as talking on his decisive resistance not to involve any models that deem too slim in his future marketing communications.

“Warmhome Media Group & Verbmodels have both adopted a new global guideline that will require that all their future communications should not use models or actors that are either excessively slim or promote ‘unhealthy’ slimness”, said Uziel on Sunday.

Regarding the question of what is the link between the media’s depiction and skinny models, answered Uziel that “Anna Wintour is one of the most contributing persons for eating disorders among young girls. The media’s obsession with painfully thin fashion models has contributed to the growth in eating disorders among young girls and this should come under the international ethical spotlight after several anorexic models died in the last couple of years. Women’s magazines should be ‘attacked and accused’ of promoting unrealistic body images of exceptionally thin models inspiring others to be exactly the same.” 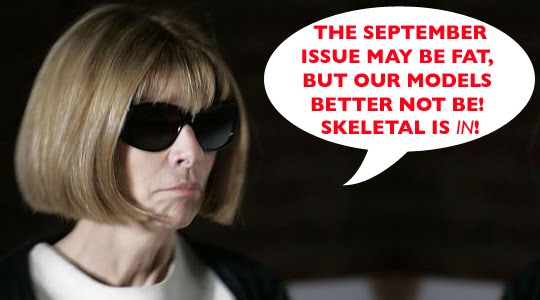 “We must do everything we can in order to ensure another model won’t fall victim of anorexia. The issue of size zero or “skinny models” has dogged fashion shows and the beauty industry around the world”, added Uziel.

Uziel plans to bring together influential people in the media and fashion worlds who could “begin to challenge some of the assumptions that the only way to be beautiful is to be thin.”

Model pictured above is Isabelle Caro, a French anorexic model who modeled on a billboard in an Italian campaign in 2007 in order to create awareness about anorexia and eating disorders in the modeling industry – as well as to challenge people’s perception that thinness = beauty. Photo from macheriefrancine.com.

I’d personally love to know how they determine if a model is “too thin”… the BMI standards imposed by Madrid in 2006 and many companies recently still seem kind of…lax? Despite what a model’s BMI actually is, some may “look too thin” and still contribute indirectly to the prevalence of eating disorders. It’s kind of like the U.S. Supreme Court’s stance on obscenity, because, regardless of whether someone is too thin by the numbers, this is an instance where you “know it when you see it.”

As if we need ANOTHER reminder that the economy stinks...
Store Closing Info Updated!
Recent Happenings in Fashion
V Magazine: Miranda Kerr in Pinup Meets Rresort