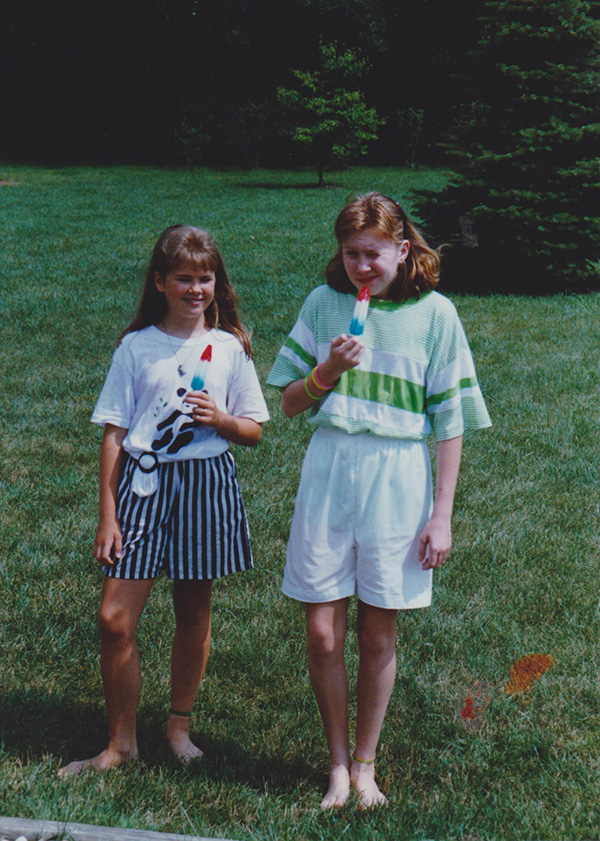 Obviously I have a thing against the sun, even back then. #vampiresforever

So the Internet is doing this thing called #ThrowbackThursday, and apparently I’m the last one to jump on the bandwagon. I decided to post an old photo of me today, just for fun.

The year was 1990, it was around June or so. My good friend Alyssa Hoefener was moving away (Illinois or something, if memory serves), and she had a going away party at her house. I was 11-and-a-half years old, and about 2 months away from moving to Yokohama, Japan. This was the Summer I had been dreading for months.

In 3rd grade I had experienced a growth spurt, and by 5th grade I was the 2nd or 3rd-tallest girl in the entire grade (about 70+ students). Alyssa (left in the photo) was super-cute and petite, and I look at this photo and remember towering over everyone that Summer, and just feeling like an awkward giraffe.

My bangs were impossible so I was into this phase of just hacking them short periodically. Alyssa’s bangs were always cute and 80’s-awesome, but mine just didn’t do that. *le sigh* I remember I had gotten a camera for Christmas earlier in the year, an incredibly basic Kodak something-or-other, and I tended to use it so rarely that I went through a roll of film like every 4-5 months or so. “Photography” was not yet something that I realized one could do as a hobby, haha. I don’t even remember owning those shorts, LOL. Jelly bracelets were the new thing (as opposed to friendship bracelets – soooooo 1989 – and I think my friends and I had this thing about wearing ankle jelly bracelets on our left ankles.

We had ice pops and threw water balloons at that party. I really missed Alyssa when she left. I think I wrote her after she moved and I heard from her once but then that was it. Such was life before the Internet. Now you just Facebook Friend everyone and stalk them silently when you want to see what they’re up to. But I haven’t found Alyssa on Facebook yet. It’s now 24 years and I have no idea what happened to her since then.

You were a good friend to me, Alyssa. Hope you are doing well, wherever you are!

My Terrible, Terrible Secret. And I Got Fat Too.
Video of Me Speaking Japanese
Me at Portland Fashion Week
Clothing Line I've Designed: Formspring.me Question