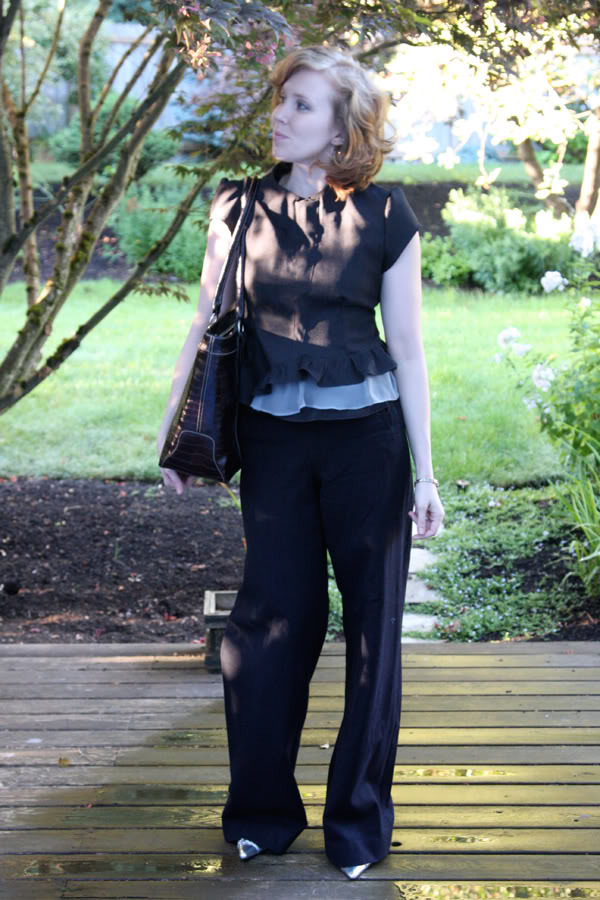 As many of you probably know, I’ve been applying for a full-time job for quite some time.  The pickings in my chosen field [filmmaking/animation/illustration] are somewhat slim here in Portland (though waaaaay better that in Honolulu!), and every time I’ve applied somewhere, I haven’t gotten any replies, regardless of how many times I politely follow up or ask for informational interviews.  There’s a ton and a half of creative professionals here, so the competition is also fierce for what does become available. Things have been pretty stagnant on the job front for me for awhile.

But finally I spotted and applied to an open position at a company that I’m so excited about, and they actally called me back and set up an interview!!  So I went, met with some of the staff, and had a 30-minute interview.

I went for business casual with a twist for my outfit. 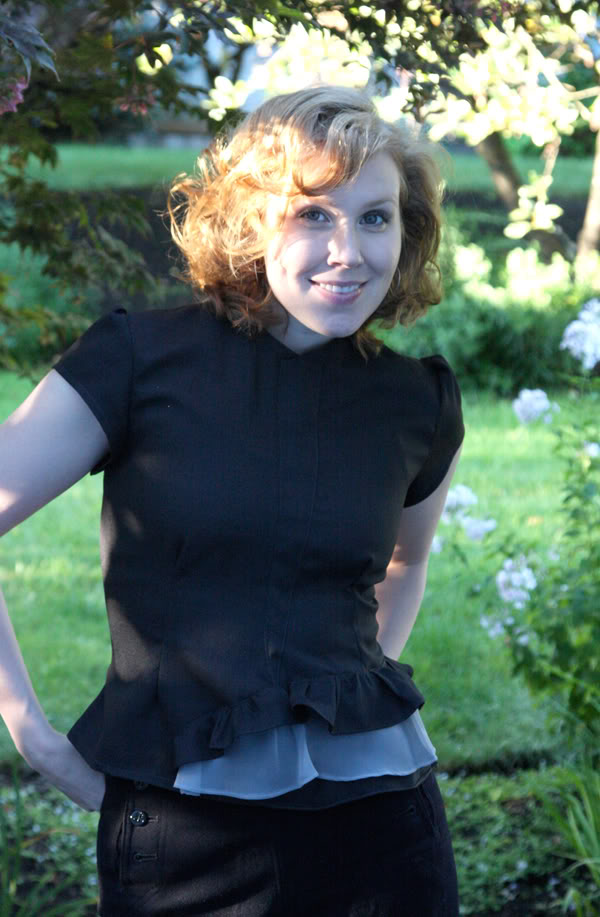 The top is an original piece – if I were to make more, the pattern definitely needs some tweaks, but I love that it’s businesslike but feminine at the same time.  It’s made of lightweight suiting with a chiffon inset at the waist. 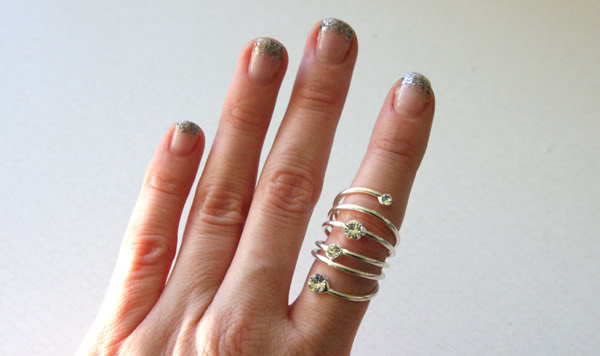 I love this pretty sparkly ring. Would you believe it was $7.99 at Payless?? 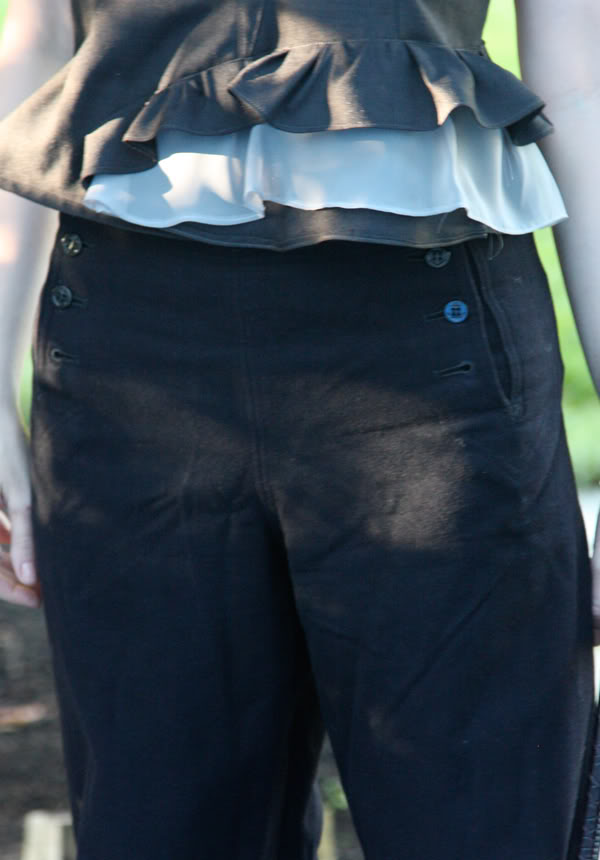 I’ve gone on and on about how awesome U.S. Navy-issue vintage 13-button sailor pants are(also called “crackerjacks” because that’s what the Crackerjack Boy is wearing on the box!) so many times before, but I just can’t help myself!  I finally found my size on Ebay, and though they’re the navy boiled wool version and more suited to winter, they’re so flattering in fit that I will definitely be wearing them as much as I can!  I prefer the black twill version since it’s lightweight enough to wear year-round, but the waist/leg sizing has to be exactly right or things look weird.

My brother used to thrift these at the Army/Navy surplus near where we lived and picked them up for a $1 a pair back in the mid-nineties!  Then I stole a pair of his and made them mine…and I was hooked on these pants ever since.  Eventually he stole them back when I moved my stuff out of the house, so I lot my favorite pair and have been on the lookout since then for a replacement.  In the meantime, around 2003 or so many designers started churning out their own versions – with hundred-dollar pricetags to match! – and even the authentic vintage U.S. military-issue pants on Ebay spiked in price.  Now you can find a pair for around $28-$35, mostly in pretty good condition.  These pants can go through hell and high water and not wear out or tear!  Very, very sturdy. 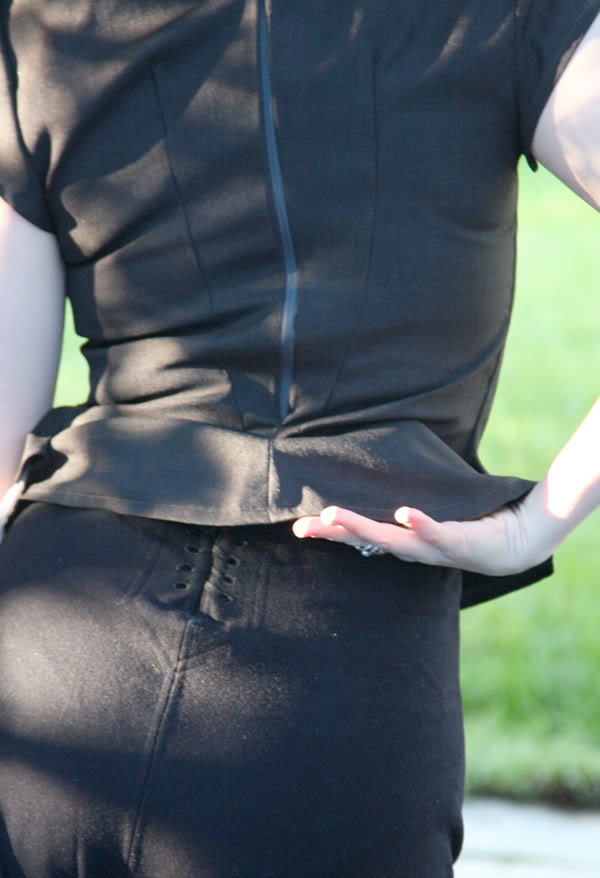 Just in case everybody wanted to see my butt up close. 🙂 The pants have this lacing at the back that really cinches in the waist and makes your legs look a mile long.

The original design of these pants can be traced back to about 1894, with the 13 buttons holding the front flap up (and though some people theorize that the 13 buttons represented the U.S.’s original thirteen colonies, it was more likely just an issue of function than patriotism).  The wide-legged shape ensured that sailors washed overboard could easily remove the heavy wool pants without having to remove their regulation shoes while in the water. The pants were part of the standard Navy crackerjack uniform until the early 70’s, and resurrected again in 1979. (source)  However, around 2006 the Navy released the information that they are slowly going to phase out the crackerjacks uniform in favor of their new “work uniforms.”  It’s true that the buttoned flap is a pain in the keister to do up and reattaching the buttons is a pain, but it’s truly  very recognizable uniform and I hope they don’t get rid of it permanently.  It’s always fun to be wearing a bit of history – the sailors had to write their names on the pant labels so as not to get them mixed up – and mine say “William Conim” (I think) with his HA number.  I wonder who he was? 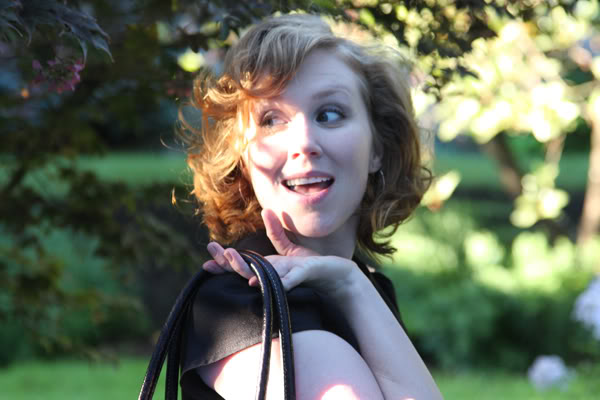 This laptop bag is siiiiick. (scroll down to see)  $26.99 at Target, and it has way more accoutrements and flaps and pockets than any other bag I own.  A padded removable laptop insert, a removable cellphone case, a lanyard for your keys, 4 lipstick pockets, 2 larger pockets, and a zippered pocket.  I was thrilled with this, as it can hold my portfolio and resume and laptop and everything else, and it’s extremely structured and heavy-duty!  The only downside is that it’s a bit heavy.:-(  It’s still listed on the website here, though it says it’s only available in stores.  The version I have is a burgundy color, though it’s hard to tell in the photos.

I usually don’t wear kitten heels but this pair is so bondage-chic I had to.  They were like $17 at Don Quijote in Shibuya [Japan] – an awesome store that sells everything kitschy and crazy that you could think of.  Apparently it’s an excellent store to visit late at night when drunk. 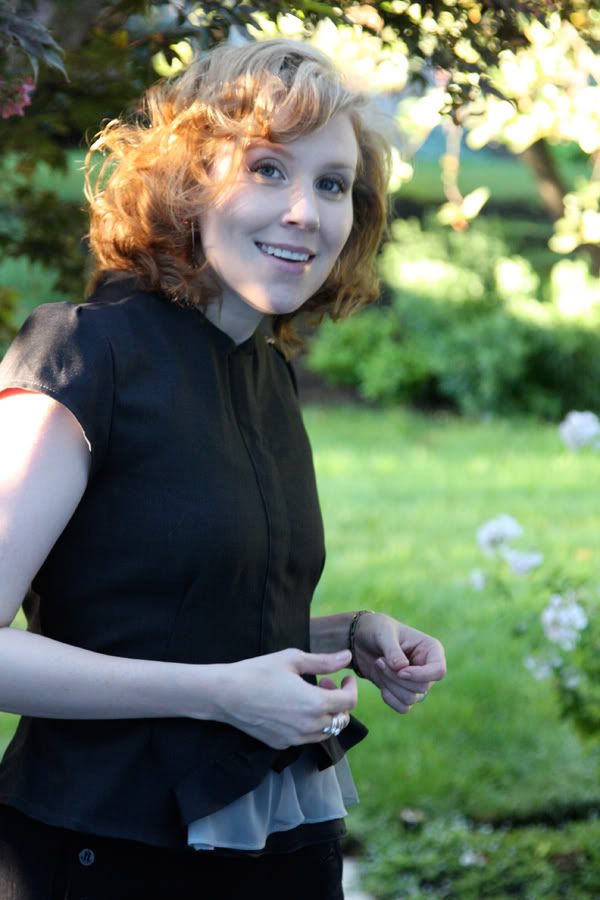 I went a little crazy with the hot curlers.

I don’t really want to jinx anything by saying too much, but, regarding the interview…on the bright side I didn’t gibber or drool over myself, didn’t summon a ball of lightning, didn’t knock down their projection system, didn’t let out a string of epithets, didn’t cause a cataclysmic earthquake, and didn’t share a glimpse of my undergarments.  Apparently I did alright and they seemed to like me as they even asked me back for a second interview!  Now I’ll get a second chance to gibber and drool and cause some natural disasters.  All in all, a v. good day! 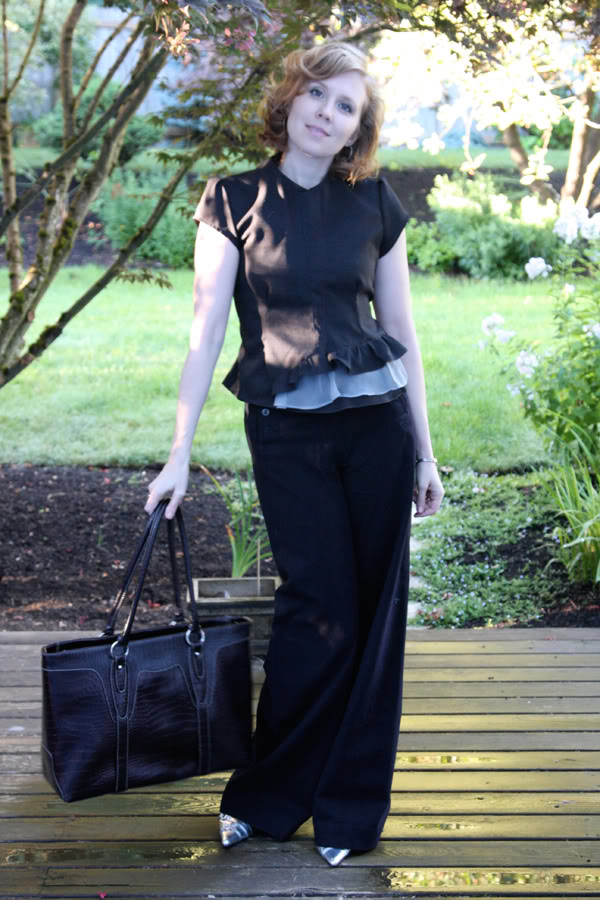 Is everyone having a great weekend?  I’ve been so excited since my first interview that I’ve been having trouble sleeping – hopefully, things are looking up for me & the fam for the future!
xoxox
Carly

Edit 9/2: If you are looking for your own pair of vintage sailor pants, here are some tips:

Tips for Finding Your Own Perfect Pair of Sailor Pants

*If you have a military surplus store near where you live, try them first.  They will be cheaper than Ebay, and even if they don’t have changing rooms, you can just wear a pair of leggings to the store and try the pants on over the leggings.

*Sometimes the pants show up at Goodwills, Salvation Army stores, or other thrift stores, but it’s rare.

*Check Ebay.  The most common keywords for searching for these are “Vintage U.S. Navy Military 13-Button Sailor Pants Trousers Wool“.  Try different combinations of these keywords.

*There are two types of these pants: navy boiled wool (heavyweight) and black wool twill (lightweight).  I personally prefer the black ones, but I am wearing the navy boiled wool ones above.  Make sure the seller specifies which type they are!

*Look for a pair that’s your pant inseam length.  If they’re too short, ask the seller if they have the standard 3″ hem on the inside of the legs – sometimes the pants have been altered, and you won’t have much extra fabric to work with.  But you can buy a pair that has that extra fabric for hemming and just let down the legs, or have a tailor do it for you, once you’ve bought them.

*The waist/hip size is the most difficult to deal with.  If you have ever tried on a pair of these pants, then you’ll have a better idea of what size does (or doesn’t) work for you.  If you haven’t then you’ll have to go by the numbers.  Wool has very little “give” or stretch, unfortunately.  I bought a pair whose waist size is 1″ larger than the waist size I would normally buy for jeans.  (I wear a 27 in jeans…most of the time…so I bought a size 28 in the trousers.)  You can see in the photos above how they’re just barely pulling at the hips on me, and the buttoned flap sits flat.  This is the right size for my body.  But your body will likely be different.  I have slim hips in relation to my waist (34.5 inches, whereas my waist is 27.5).  If you have a higher ratio of hips to waist (like closer to 10 inches) then you may have to go up more than one size in these trousers.  Like if you have a 27″ waist, and 36″ or 37″ hips, I’d recommend trying a 29″ waisted pant at least.  The place on these pants that roughly corresponds to the hips is right at the bottom of the buttoned flap.  At this point on my pants they are 35″ wide, giving roughly a 7″ difference between waist and hip measurements.  I’d venture a guess that the same ratio can be applied to any pair.  It’s always better to go a little larger than smaller, and calculate for your hips if they are more than 7″ larger than your waist, and for your waist if they are 7″ smaller than your waist.  (Thus if you have a 24″ waist and 30″ hips (a difference of less than 7″)…buy the pants that have a 24″ measurement at the waist…the 24/xx pants.  If you have a 29″ waist and 40″ hips (a difference of 11″)…buy the pants with the 40″ measurement at the hips…the 33/xx pants.  I can’t guarantee that they will fit your body type (since these are men’s pants and not as curvy as women’s, with a wider waist and slimmer hips), but hopefully by choosing the pants this way it will minimize fitting issues.

*Make sure the pair you’re buying is in good condition and from a smoke-free home (unless you are fine with stinky pants!).  Moths love these wool pants, and once smoke gets in the fabric, it’s extremely difficult to get it smelling fresh again.