So…Our Plane Back to Portland Ended Up on the News…

I’m beginning to think that myself and planes JUST. DON’T. MIX.

Rough translation of the above video:

Today [Monday, July 19], around 5:15 PM, a Delta Airways plane bound for Portland out of Narita [Tokyo] tried repeatedly to take off, but was unable to due to the brake refusing to release.  The pilots gave up the attempted take off, and the plane was manually towed off the runway and back to the hangar.  None of the passengers were injured.  According to Narita officials, the cause of the problem was due to the plane getting stuck in the unevenness of the runway surface covering.  They ended up having to close the runway for about 40 minutes.

Perhaps if you peer closely at the image above, you can see my scowling face from one of the windows on the plane.  (Just kidding; I wasn’t near a window.;-)

And this was AFTER a 1-hour delay where we went to take off and the pilots couldn’t get the rear hatch light to light up and indicate the rear hatch was actually closed – so we taxi’d on back to the hangar and waited while the maintenance crew fixed it.

Then, the SECOND time we went out onto the runway, the pilots opened up the engines SIX TIMES, and the plane did NOT budge.  That was pretty scary.  I thought they were just playing chicken with the Air Canada B747 next to us – kind of revving up the engines, like at a racetrack.  (At least that was what it sounded like!)  15 minutes of sitting out there on the runway doing that, 8 planes backing up behind us. and we didn’t budge…so the tower had to stop all incoming traffic and we had to be towed off the runway as you saw above.

Here’s the screenshot of the news article on Japan’s AP saying basically the same thing, except with a little more information.  What had actually happened was that due to high temperatures in Tokyo the asphalt of the runway had softened, and the planes wheels had sunk into the depressions.  Apparently the 23,000 pounds of thrust per engine on the Boeing 737-600 could do nothing to pull us out of those divots created by the wheels.  Um, okay… 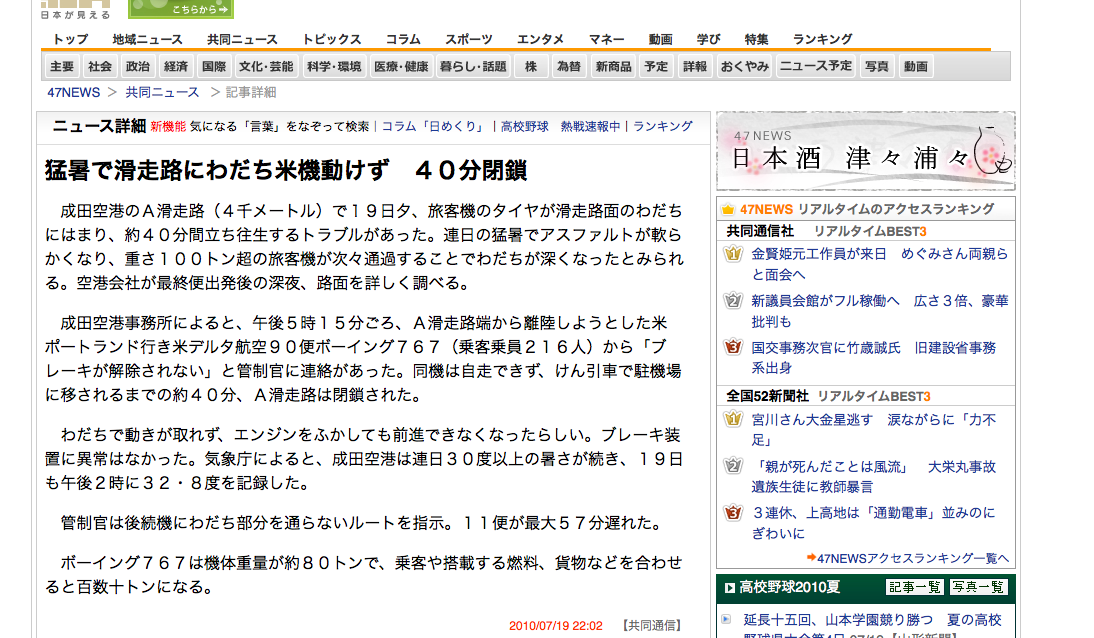 The pilot said that between him and the other 3 in the cockpit they had a combined total of more than 120 years of flight experience, and none of them had EVER experienced anything like this!

I swear, I am so sick of bizarre things happening to me on airplanes!!!
(In other news, I am back safe and sound in Portland, after a flight that was supposed to be less than 9 hours had us all stuck inside the plane – but not necessarily flying – for 12 and a half hours.  With a four-year-old in tow.  UGH!)
xoxoxo
Carly

Update on My Mother and Tokyo Photodiary 1 (lots of photos!)
My Photos from My July Trip to Tokyo
Back from Camping: Silver Falls, OR Photo Diary
Lucky FABB 2013 Event Recap and My Trip to New York City