Goodwill Outlet Store AKA “The Bins” 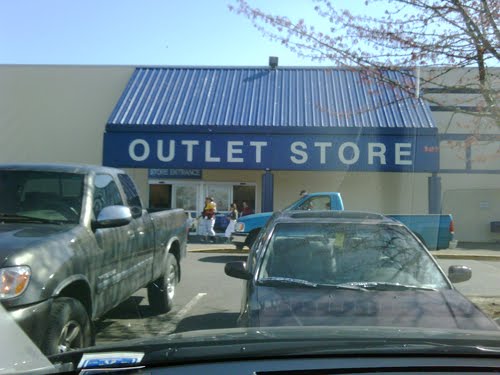 I visited a Goodwill Outlet store for the first time ever last week.  I had first read about these fabulous stores on CheapJap and was intrigued, to say the least.

When it comes to the life cycle of a donated piece of clothing, the thrift store is not the last stop on the line.  (Goodwill is one of many charities that works tirelessly to keep articles of clothing out of the landfills – and happens to be my favorite charity when it comes to donating my used clothing!)  Items of clothing that are donated to charities such as Goodwill are first sorted through; those that have minimal tears/stains/rips etc. go out on the selling floor, and those that are deemed less-than-worthy are sold to recycling companies such as Trans-America.  Such companies will recycle the garments into rags for industrial usage, or insulation, auto sound dampening, or carpet padding (source) – at the rate of about 260 tons annually.  Other articles of clothing are sold to developing countries at about 25-50 cents per pound.  In all, about 2.5 billion pounds of clothing a year is processed by such companies and sold abroad.  Imagine: that t-shirt made in a factory in China…could end up in a rural province not far from its origin someday. 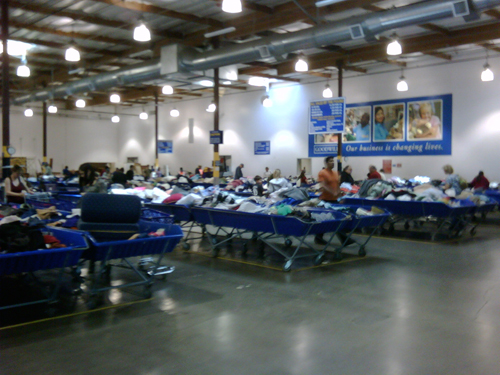 However, each Goodwill chapter is at liberty to determine its own policies, so there’s no guarantee the clothing you donate will see those eventual end uses.  After a certain time at the regular Goodwill retail store, many items have not been sold, and it is then that they arrive at the Goodwill Outlet Store.  (There is a great photo essay here about how a garment travels through the Goodwill system of sorting and management, if you are particularly interested.)

The Goodwill Outlet Store is the last stop along the line in the life cycle of your average garment – if it fails to sell here, it is compacted by the baler and sold to the rag trade.  The idea of rescuing perfectly-usable items that would otherwise be thoughtlessly discarded appeals to me greatly, so I’ve been wanting to stop by and see how I could help (and how creative I could get with the results!)  Why the heck don’t they have a Project Runway episode with the designers scavenging their raw material from here???  I think that would be fabulous! 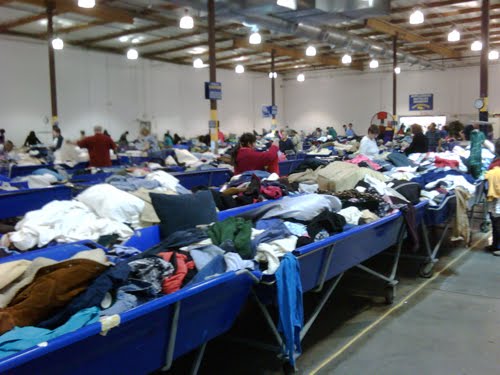 I love going to Goodwill (the Salvation Army “boutique shops” near me are ridiculously overpriced and have few pieces to pick through, Buffalo Exchange is fabulous but quite pricey, and I dislike going to “vintage stores” since the prices are usually enough to scare me out the door as soon as I glance at a tag).  But Goodwill is consistently a source of great pieces…the problem is that you just have to look.  (I’m not one for combing vintage stores for a great find; I usually find it insanely tedious.  But the fabled DOLLAR A POUND for clothing was way too good a lure to pass up.  I mean, even at fabric stores here in Portland I have never found fabric for a dollar a yard, so even if I found some cool sheets or something that I could use as raw materials I would be saving money.  [Okay, you New Yorkers – I know $1/yd of fabric is nothing new to you…but here in Portland it’s a bit revolutionary – rarely seen even from the jobbers that pass thru here from time to time.])  Now that Lil Tot is in school more and I am still technically unemployed, I have a lot more free time, and so I decided to spend one early afternoon braving The Bins.  Perhaps I would even find something with a designer label on it – the Holy Grail of shopping vintage.

CheapJap offers some great tips for visiting one of these places, and for sorting through everything (except I could only find one of my rubber gloves before leaving the house – I’m not sure where the left one went), so I spent about 2 hours sorting one-handed through more than 30 dumpster-sized bins in this gigantic warehouse.  People were looking at me strangely (for the single glove, I suppose), but when I saw that the workers there were wearing face masks, I didn’t feel so ridiculous.  There were some dirty clothes in there, man.  I was also surprised at how many families were there – parents and their numerous children were also combing through everything, spreading out and moving from bin to bin en masse.  The people with their carts the fullest were likely those who were trying to re-sell the clothes…one woman I talked to had a shop on Etsy where she made her living (re-)selling vintage pieces. 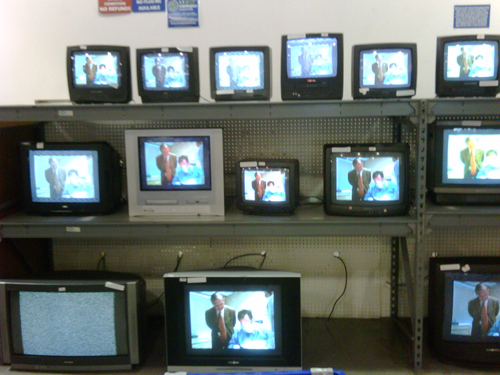 There were TVs too!

As I was going through everything, my head was just spinning with possibilities.  There were so many fabrics, so many ways I could give new life to these clothes – so many possible alterations…

Of course, most knit fabrics (i.e., t-shirts) were pretty much there for a reason: stained, hideously pilled, or worn.  There wasn’t much reuse potential there, I found.

But polyester garments had, on the whole, fared pretty well in The Bins; leather pieces had a lovely, beaten-up quality to them (though there were some in close-to-pristine condition); cotton items ran the gamut, tho most were crumpled (but could probably be restored with a good washing and pressing).  I focused mostly on wovens or synthetic fabrics, in large sizes so I had a lot of fabric to work with.  There were of course items in excellent, near-perfect salable condition with nary a stain in sight, as well as the odd designer label peeking out here and there.

There was a large amount of Jones New York, Talbots, Metro7, Isaac Mizrahi, Liz Claiborne, Worthington, Levi’s, and Old Navy…which I think says a lot about the things people get rid of and that which is in excessive supply in the marketplace.  Private label companies for mass merchandisers…are you listening???

I piled up my shopping cart (and I mean – PILED up, so mountainous I could barely navigate turning it), and then at the end, dumped it all out and went meticulously through it, chanting to myself “$1 a pound, $1 a pound!” I eliminated many of the gigantic leather jackets I found since they were quite heavy, as well as the denim.  Light poly, chiffon, and lace stuff got a pass since it would work out to pretty much nothing at the register. 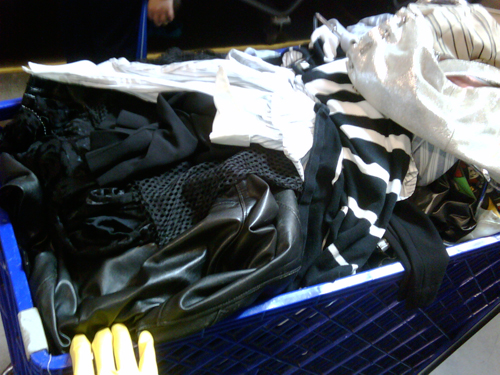 Despite my best efforts, when the lady at the register rolled my cart onto the scale, she read out “48 pounds.”  I almost died.  FORTY-EIGHT POUNDS OF CLOTHES!!  Say it to yourself.  Forty-eight pounds of clothing.  It’s unreal.

I was trying to save these clothes from ending up in a landfill – the ultimate result of excessive consumption – and as a result, I am excessively consuming them in bringing them home in the first place.  Ironic.

Here’s what I bought: 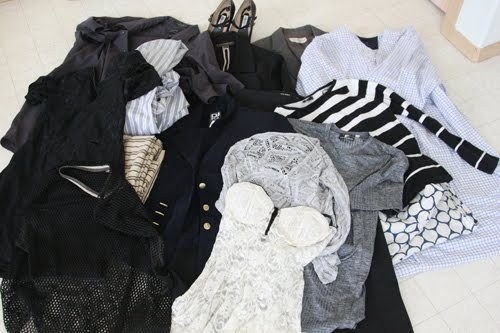 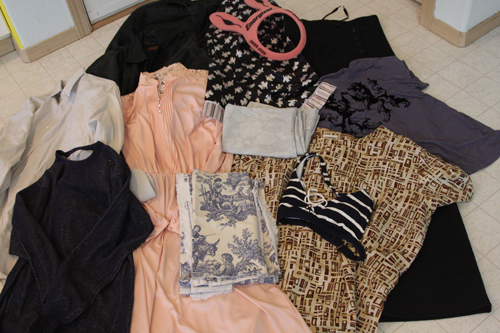 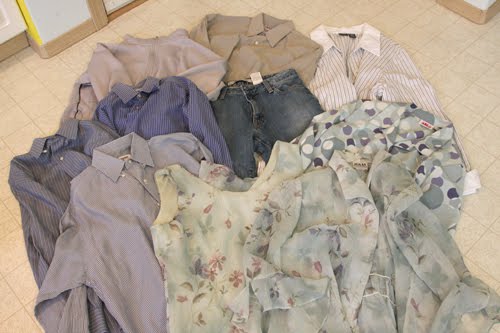 And what cost did all this work out to? 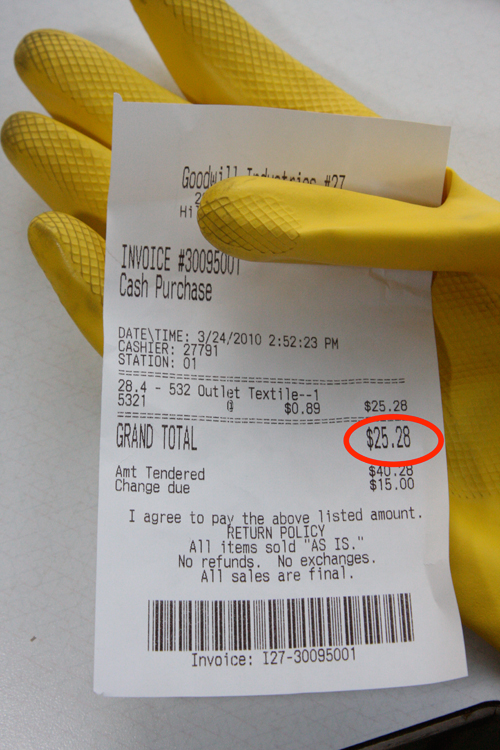 Though I now have all this great raw material to work with….it’s now a question of when I’m going to get around to it.  I really need two of me to deal with this!;-)  But from here on out it’s a sewing and DIY extravaganza…and I can’t wait to share the results!

Have any of you ever been to a Goodwill Outlet store?

My Article "Crafter's Paradise" in Cut Out + Keep's Snippets Magazine!
Review: Maruti Beads Straight from India, Gorgeous, Handmade Beads for the Jewelry-Lover in Your Lif...
Looking for a warm sweater this season? Look no further than dressbarn!
Best Brands to Buy from Shopbop When You’re on a Budget