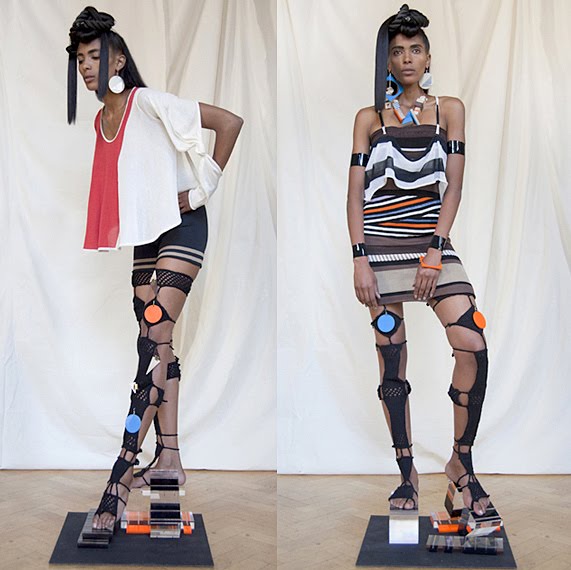 Seen on the likes of uber-fashion blogger Susie Bubble of Style Bubble, and subsequently covered on TLo.com, Cooperative Designs‘ S/S 2010 crocheted tribal legwarmers leg-accessory thingies have been making the rounds on the blogosphere for some time.  They’re a pretty distinct look. 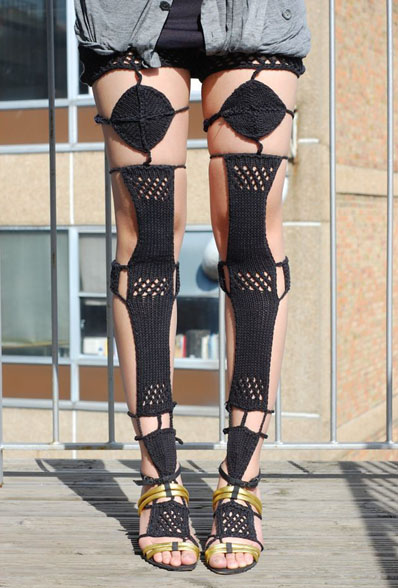 That’s why when images of the Lovin Malandrino S/S 2011 show popped up in my inbox, I did a double-take. 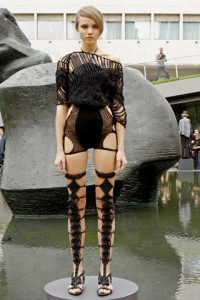 Featured on POSHGLAM last month, here’s what they had to say:

Though Malandrino was inspired by Roger Capron, a French ceramist, her pieces were definite original works of art. Leather macramé was the fabric of choice and the most amazing use of it was the over-the-knee gladiator sandals.

Okay so they’re leather, and stylistically they’re a bit different from the Collective Designs version. But do you see an “inspired” design here??

As a fashion designer it’s so hard not to be referential.  To be less PC about it, it’s so hard NOT to knock anyone else off.;-)

The art of creating beautiful, wearable pieces to clothe the body has been around for thousands, if not millions of years.  Everything by now has been done before.  Everything is a knockoff in some way, in some element.  Many people cite hte safety pin as being the most widely-used knockoff – originally invented by the Romans, not only is it now a functional staple in your standard sewing kit, but it’s also been “re-imagined” by everyone from Givenchy to Subversive.  And no one’s screaming copyright infringement.

The reason why we laud the designers we do, and await their collections season after season, and are not up in arms about “we’ve seen this from ______ (insert other brand name here) already!!” is because there is copying afoot, but it’s cloaked styled in such a way, reappropriated in such a manner, that it’s not immediately obvious.  That is the hallmark of a truly gifted designer – someone who’s able to take that “inspiration” and recycle it into something that doesn’t tip anyone off to its origins.

Me, I believe in giving credit where credit’s due, and if you’ve created an “inspired” piece that’s obvious upon looking and has enough similarities that you go AHA! (when it comes to defining how similar a piece can be to be called a “knockoff,” in Judge Rehnquist’s words, “I can’t define it, but I know it when I see it” or the more popular “if it looks like a duck, walks like a duck, and talks like a duck, it IS a duck!”)…then you need to say “inspired by” at the very least to lay it all out there and be honest about it.

And I truly oppose large, established fashion houses ripping off from the little guys.  You fashion houses are supposed to be the most forward-thinking and setting the trends!  Don’t look back, don’t do what has already been done.  In fact, I oppose designer copying among each other in general (except when it’s a mass-market brand).

Forever 21 distilling Catherine Malandrino to their store shelves?!  No problem!  H&M being “inspired” by Gucci in their designs?  Bring it on!  But Erin Wasson blatantly ripping off Bliss Lau’s body chains or Pamela Love stealing Arms and Armory’s bird skull pendant?  NO!  This is high-fashion (+high-price), non-mass-market, independent designer lifting from smaller, independent designers.  In my book, this is a big no-no!  If you’re bringing fashion to the masses, it stands to reason that you would lift from the established, forward-thinkers.  Mass market fashion is not, by definition, forward-thinking and in fact, knocking off is expected from them.  Everyone deserves a shot at having more affordable “high-fashion Style” brought to them.  I just think companies should credit the original –  and not create EXACT copies, just “similar to” pieces – and even pay a percentage of their sales to the creators of the original item.

So what’s your take on all this?  When, if ever, is copying or creating an “inspired by” creation okay?  Does Catherine Malandrino skate on by?  Or is this just a case of two separate fashion houses producing two separate accessories during the same year that just have a number of similarities by pure coincidence?  Are there enough differences in these legwarmers that it’s no longer “inspired”?  Or does it “LOOK LIKE A DUCK WALK LIKE A DUCK AND TALK LIKE A DUCK?!”