Two outfit posts in a row??

Carly, are you nuts??? (Maybe I’m procrastinating on writing those DIY tutorials…??)

Okay, so I dressed up today to go to one of the worst Japanese restaurants in SW Portland…not that we knew that before we went there.

[BTW…Does anybody know of an authentic, delicious Japanese restaurant in Portland or its surrounding ‘burbs???? Like SW?? (And they better not serve California rolls, because that is definitely not authentic [but I like them anyway – shhh! Don’t tell Hub.] And don’t say Sinju at Bridgeport. They were awful – I mean, slices of potato [russet] in your tempura??? A gigantic multi-floreted head of broccoli tempura?? Blecch. Even I couldn’t stomach that – and I will eat just about anything deep-fried.;-)]

So anyway, I wore a couple of pieces tonight that I found while I was in Japan, to the restaurant a.k.a carpool lane to food poisoning.

Jacket from MITSUMARA Allameda Allamada Allamanda. Whatever. It’s on the first floor of Shibuya-109 on the right as you come in the entranceway. Gosh, I could spend hours at the 109 shopping mecca. It’s like another world. (Of course every Hollywood starlet who visits Japan drops by there – Beyonce [who’s in some awful commercial playing on TV there right now- I’ve never seen her so stiff and uncomfortable in front of a camera; it’s so disconcerting and I can’t remember what it was for…], the Hilton sisters, and Hilary Duff all hit up this mall when they’re in Tokyo. Anyhoo.) When I found out Shibuya-109 finally [it’s only 2009, people!!] opened a web store, I was thrilled. Not that I would buy anything online from them anyway – I have to go there in person to just soak in the whole atmosphere. I just like staying on top of what they offer.

Back to the jacket. As you can tell, it has the same fatal flaw that most clothing made for the Japanese market has – it’s cut to Asian body proportions, which means the armscyes are waaaay to high and there isn’t enough room in the sleeve cap or ease in the upper arm. Maybe I have man-arms???? I dunno – I guess Asians have their arms connected to their body higher than the European-derived Caucasian. Plus the Asian body is flatter than the Caucasian – which causes a whole heck of a lot of problems when trying to fit Asian boobs into bra cups that are made for a Caucasian body (which is one of my theories as to why Victoria’s Secret is not doing so well in bra sales compared to lingerie giant Peach John when it comes to the Japanese market. Yet PJ extensively uses Caucasians in their catalog to model their lingerie, which is somewhat hypocritical, hmmm??? Even the Peach John catalog spells out how they draft their patterns to accommodate the flatter ribcage and boobs that are placed further apart and higher up than those of the average Westerner. Trade secrets and hypocrisy! I love it.)

Back to the jacket. Gosh, it’s getting late. The sleeves are ruched and stay permanently rolled-up – love the little glimpse of leopard at the cuffs. Just enough leopard-print for me. 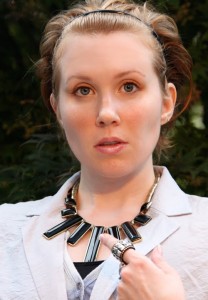 I’m having a really freaking Bad Hair Day. Headband by Goody LOL. F21 necklace I wrote about here, then I realized I wanted one too and so bought it. That’s the downside of writing a blog and sourcing out fashionable stuff – I tend to covet it and eventually buy it too. Ah well. A girl has to sample the goods, no? It’s a little 70’s for what I normally go for – I may take off those snakelike gold disks above the acrylic jewels. 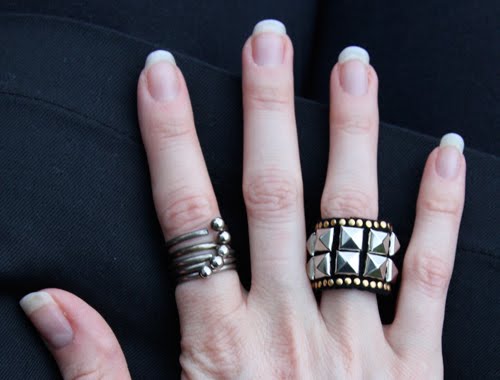 I’m wearing multiple silver rings that have a ball on each – they can be pulled apart and all worn separately, as you can see below. The studded ring is studs and heat-set gold rounds (that I applied by hand, one by one) onto fabric. It’s my own design. I showed it around to boutiques in New York when I was there last time and a few expressed interest…but honestly, it’s a piece that could be knocked off very easily and quickly by a bigger company and so I’m not sure if it’s something I want to venture into making myself, in quantity. I don’t know – it’s a lot of handiwork, so I figured to make it be worth my time I’d have to charge a fair amount for it. What do all of you think? 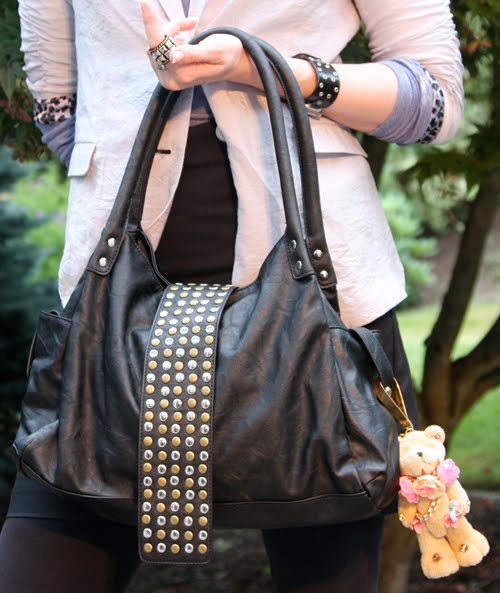 Cool bag I found in Japan (at this store called XOXO, which has absolutely nothing to do with the XOXO we all know here in the States. I wonder if they’ll sue??:-) I forget whose bag they’ve knocked off (can anyone help me out here???) but it was $39, and I love how it goes with both silver and gold accessories.

Because you’re never too old to have a Mr. Bear on your bag.

I added Mr. Bear to my bag (I just call him that – he’s kind of a pouf, if you know whutimean…he loves everything sparkly). I pretty much went to every trendy store in Japan looking for this thing…about 6 months ago in Japan the thing to add on to your bag was a stuffed, decked-out bear (I’ve mentioned the trend of bag add-ons here). They crowded the magazines and most notably was Immanoel’s $79 version with Swarovskis and chain attached. Fabulous – but $79 for a tiny bear was a bit too much! Come August and I’m there – and of course the trends have changed and Popples and Care Bears seem to be the way to go (along with gigantic fur puffballs for Fall) and I scour the city looking for the elusive Bear Bag Charm. I finally found one at DollKiss, on Shibuya-109 3F. Not white or black like I wanted, but good enough for a spangled little bear!

R&E (also Sh
ibuya-109) boots!! Not available online yet that I’ve seen. I love the hidden wedge heel – they’re surprisingly comfortable to walk in. I stuffed legwarmers into them cuz I’m cool like that.

Looks like rain for the weekend here in Oregonia – hope all of you have a fantastic Labor Day weekend!! (I’ll be staying inside lying in a shivering heap from impending food poisoning, I’m pretty sure.;-)
xoxxo
Carly