No, No, No, NO! Zipper Pull Jewelry is EVERYWHERE!

Is it bad when DIY-oriented, non-mainstream jewelry is sold by such a large e-tailer as Uncommon Goods??

[They also sell a Recycled Bicycle Chain Bracelet ($14), a bangle formed from an oversized nail ($145), and a Zipper Pull Necklace ($90). All these items are apparently made by a couple of artists selling their wares – they’re handcrafted from recycled materials, etc. etc.]
Does anyone think the price is a little….um, steep???

Now don’t get me wrong…I love Uncommon Goods for funky, cool gifts. But stuff we’ve seen all over the blogosphere, and on cool it-girls like Kate Lamphear (below, photo from karen-wheredidugetthat.blogspot.com)…now being sold by such a large company online? Perhaps the trend is now officially dead. 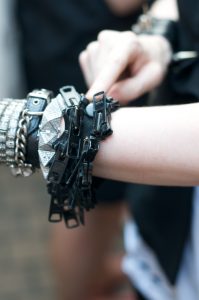 I feel bad for the designer who made this and gave it to her in hopes of some exposure. It’s okay, but the zippers look kinda cheap and bunged-up, and the cuff part that they’re sewn to looks like a simple piece of belted webbing. Maybe Uncommon Goods did it better…?

Ooh! Plus- head over to Michael’s. Look in the bead/pendant section (bypassing all the ugly gigantic lampwork pendants). There’s a line of pendants and findings called “Tokens”..and in this line is some cool, stylish stuff, like a cast 3″ bircage with a little bird in it, or an oversized kilt pin with rhinestones.

They sell an oversized (like 2″ long) cast zipper pull pendant. Gah! And I almost bought it, too!! What is the world coming to???:-)