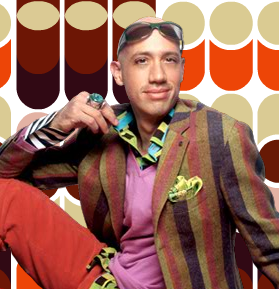 So, chickadees, if you didn’t know already – yours truly of Chic Steals (Carly J. Cais)is a designer who had a line that she had to close down after two seasons because she ran out of $ and didn’t have enough time to keep it going. So, to ease back into things slowly, put out feelers, make contacts, and get consumer feedback, she made some samples of some new stuff to take to New York Fashion Week while she was covering it with FashionTribes.com. And she has shown the bag she made to every single person she possibly could while in the tents, walking the streets, etc. etc. (She also made jewelry too, but does not show that around as much since last time she took it out to show a boutique owner she dropped one of the rings on the floor and it broke.

This one in fact (shown pre-breakage): 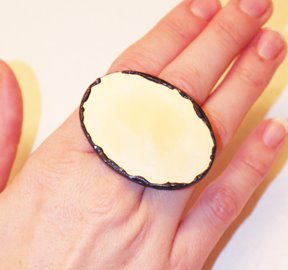 Yes, it’s an oval mirror set in a blackish lumpy bezel; yes, you are seeing it correctly.) And she was walking down 6th ave wearing one of her belts and the decorative buttons on it were falling off, leaving a trail down the avenue. Not going to make that mistake again.
So she’s flashed her bag around to everybody and their dog and tonight after being turned away from the William Rast show (it was a friggin ZOO) she saw THE Robert Verdi standing around talking to some socialite-looking people. I horned right in and said hi and asked what he thought of my bag – he was really interested (like not just polite) and was touching it and the socialites were fondling and oohing. (Sorry for the switch; the 3rd-person subject is getting annoying.) I was on cloud nine. But only for the 3 minutes that we were talking – then he was rushed off. How fabulous!!!