Is Fashion Racist? Chictopia Article: The Rise of the Asian Supermodel 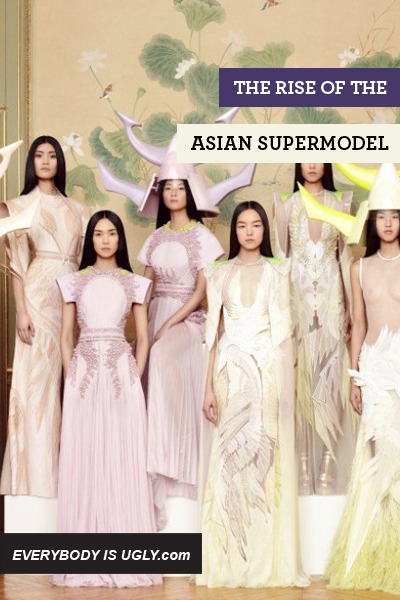 A great and insightful article posted on Chictopia about racism (mostly regarding the use of Asian models) in fashion.  As someone who spent my formative years in Japan (and getting used to the types of models used in fashion and the media over there ), I found it an interesting discussion about the models used in the West.  To me, whenever I come back to the U.S. from spending some time in Japan, I always have this period of reverse culture-shock, where I watch TV or flip through magazines, and am wondering “Where are all the Japanese and half-Japanese models?”  Then after awhile I get used to it and even stop noticing that Asian faces permeate the media far more infrequently than over there.

Sometimes I wonder why companies, who want to be PC, don’t just split their model usage according to the population demographics of the country they’re targeting.  (For the U.S.: 60% White, 13% Black, 15% Hispanic, 4.4% Asian, 2.3% Multiracial, 0.8% Native Americans/Alaskan native, 0.14% Native Hawaiian/Pacific Islander, and 5% “some other race”, mostly being of Latino origin. Source)  Or split the demographics according to world population.  Would that not be the most fair?  Or would people be more in favor of using models that reflect the demographics of the market their targeting (i.e., their customers)?  Or, since fashion is essentially aspirational and idealized, should race be allowed to be a component of that?  Or does it inherently become part of that aspirational quality?