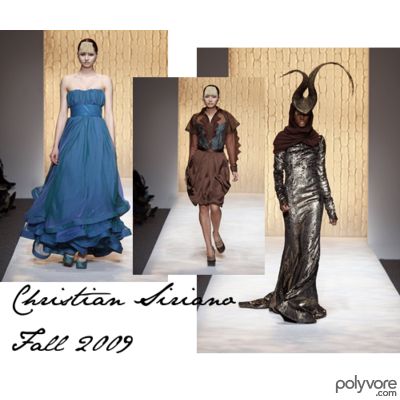 And What About the Winners of Project Runway from Past Seasons? (Seasons 4 & 5)

The tiny Salon packed to the gills; Tori Spelling causing a media stampede as she arrived and then the doors being closed to all media thereafter; our “Priority Standing” designation meaning “Standing Way at the Back Unable to See a Thing;” the Countess LuAnn de Lesseps from “The Real Housewives of New York City” in the front row– it could be none other than the Christian Siriano Fall 2009 Runway Show at New York Fashion Week – equal parts kitsch and fab.
(More after the jump…)

With strong shoulders and even stronger sleeves in a collection dominated by shiny fabrics, Christian Siriano’s designs stormed the palace in their characteristically fierce manner. Inspired by Ancient Egypt, the fabrics consisted mostly of browns, golds, and beiges, highlighted by some turquoise pieces near the end of the presentation. Though the drapey sleeves on many pieces were innovative and the skirt pleating felt current; the brown and beige color palette was unusual for a designer known for his partiality to black, white, and gray accented with punchy pops of color, and the shoe and bag collection, designed for Payless, seemed bulky and a little dated. There were two turquoise gowns near the close that were showstoppers in and of themselves – but taken as a whole the collection felt a mis-step for the young designer, and the squashy hats and gold beaded bangs on the models, well, just plain silly. But it was definitely Fashion with a capital F; and judging by the strong retail buying presence in the front row at the show, likely to be seen on the racks at upscale retail locations this coming Fall. See the full collection here.
(Runway photos, Thomas Concordia, Wire Image; Christian Siriano and Tori Spelling photo, Brian Arch, Wire Image) 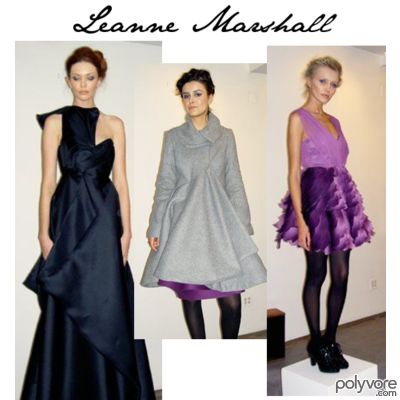 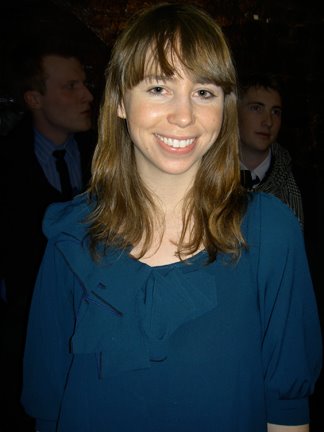 The capsule collection recent Project Runway winner Leanne Marshall had toiled away on (for three weeks prior to the show, no less) consisted of nine elegantly-detailed pieces, presented in a small gallery space some 5 blocks from Bryant Park on Thursday night. Though she had originally aimed to present twelve, due to time constraints she “decided that it would be far worse to show quantity over quality and decided to cut some.” (As written on her blog, petalsandwaves.blogspot.com.) Despite the short amount of time in which she produced the pieces, the collection, inspired by her recent move to New York from Portland, Oregon, looked reasonably polished and presentable (though upon closer inspection a few crooked seams and bulky junctures detracted from the beauty of the pieces). Taking inspiration from the angular and detailed skyline of New York City, she grounded her pieces in dark neutrals, purple, and gold. Of particular note was a one-shouldered drapey black gown with sweetheart bust, a luxurious dove grey princess-hemmed swing coat with extra pleating at the closure, and a jagged skirt made of dozens of vertical tiers in different shades of purple. The dresses especially felt fashion-forward and unique, hardly the same-old, same-old that dominated many runway shows at the tents this season. Perhaps with more time and better fabric choices (and better styling – we won’t mention the hideous bedhead and distracting shiny skin of the models) she will be able to hit one out of the park on par with her final Project Runway collection. See the full collection here.
(all photos Carly J. Cais for FashionTribes.com)

END_OF_DOCUMENT_TOKEN_TO_BE_REPLACED 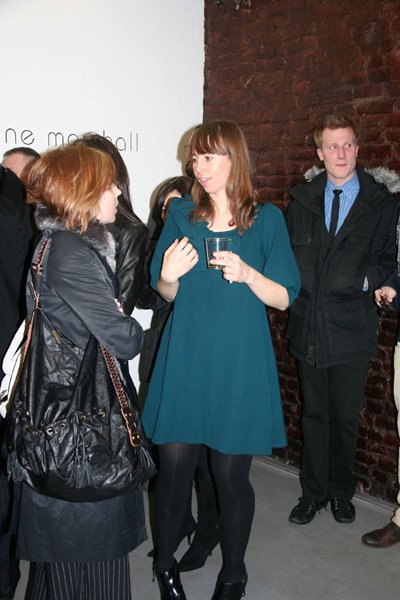 It is indeed a great, great day that I see a glimpse of myself in the background – well, in this case, foreground – in a photo of one of my all-time fave blogs. I did not even know the dudes from Project Rungay were there at Leanne Marshall‘s show during fashion week at the same time I was – and yet there I am in one of their photos, interviewing Leanne. WOW. (Check out their post re: Leanne’s show here.)

Oh, and TONS of Fashion Week coverage to come, chickadees – just getting all my stuff together, so prepare to be hit by a deluge (or two) over the coming week.