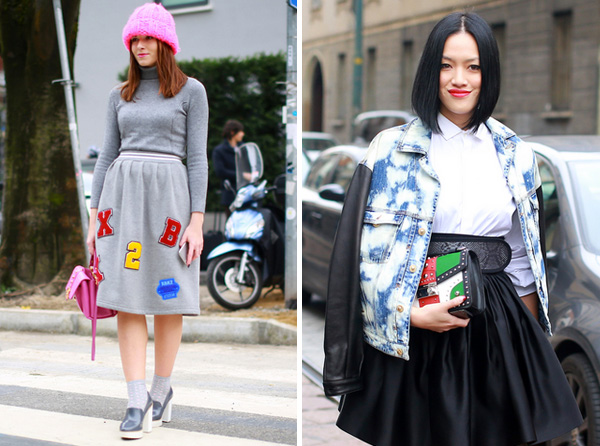 Fashion weeks around the world have drawn to a close, and we’ve seen a ton of DIY-able ideas for this coming Fall. How about that ubiquitous street style for February 2015 – what are all the fashionistas in the know wearing? The answer is fabulous coats and warm weather gear…and there are more than a few great ideas out there that are still totally do-able and make-able before Spring is fully here. See below to get those creative juices flowing… 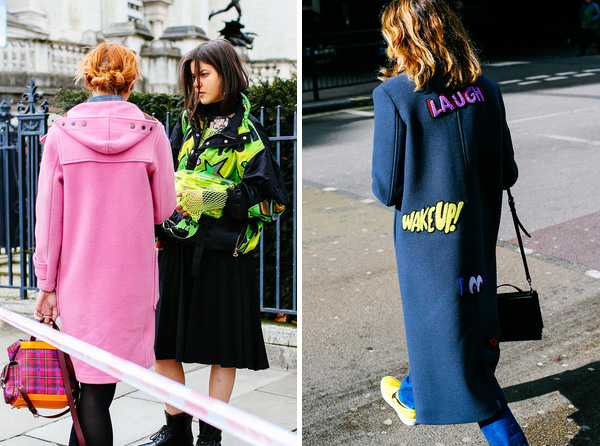 In London, Tati Cotliar sported a cut pink hooded overcoat – and you can add a similar studded detail to the hood with some flat round brass studs.

This verbose topper spotted on the streets could be easily remade with a thrifted man’s wool overcoat and adding some wordy iron-on appliqués in punky neon colors. (This Etsy shop makes some neat ones!) 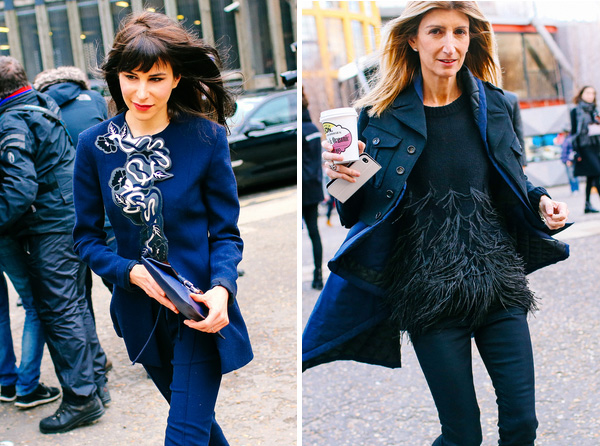 Sarah Rutson‘s No 21 top could easily be mimicked by hand-sewing some black ostrich feathers (humanely harvested, ideally) onto the front of a boring black sweater to make it chic. 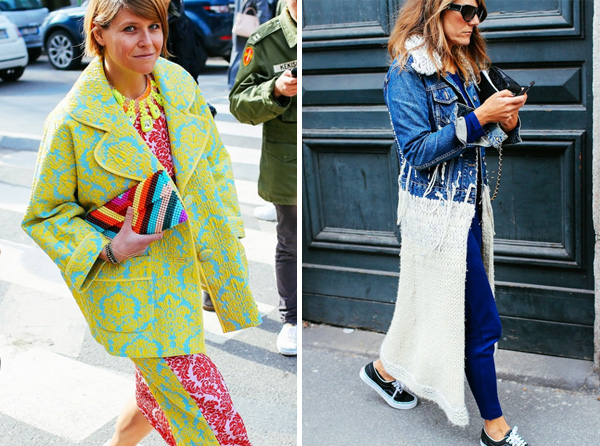 In Milan, Elisa Nalin‘s punchy ensemble is offset by a bright beaded clutch – which could be made by gluing plastic beaded necklaces from the dollar store or a toy store in a V-pattern onto an existing clutch.

This neat hybrid denim jacket spotted on the streets could be re-created by someone enterprising – just by re-purposing a knitted blanket sewn to the hem of a jacket, cut apart and used as collar-covering, and some of the yarn pulled out and woven into the jacket as detailing. (Look for a really thick, luxurious yarn to make this work!)

And that coat would be a doable Franken-DIY: bleach an indigo denim jacket, remove the arms and replace with arms salvaged from a thrifted black leather jacket. Instant Milan street cred. 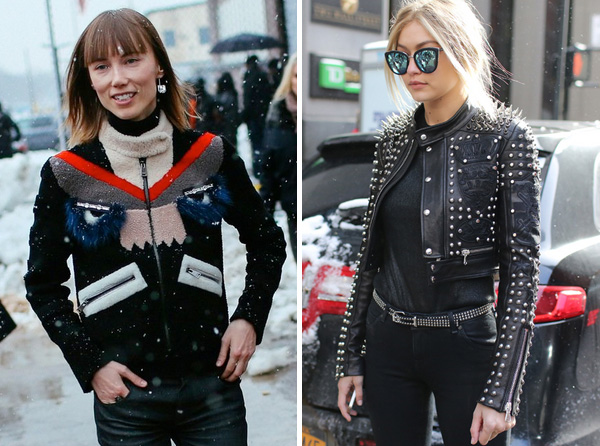 From New York, something similar to Anya Ziourova‘s Fendi sweater could be made with hand-sewing some exposed zippers to the front with colored faux fur, rhinestone trim, and colored fleece in patches and shapes to make that fun monster face. 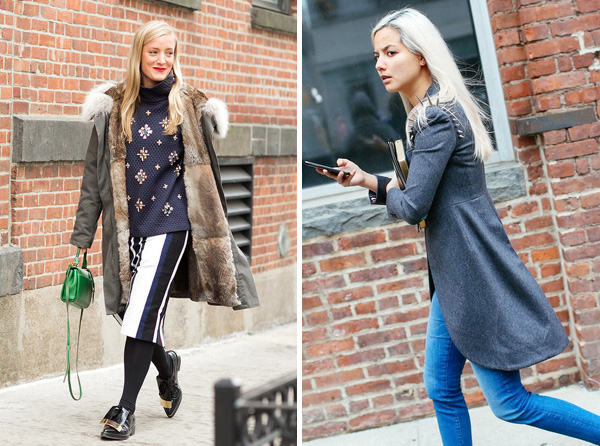 Any top could be given a glam makeover by hand-sewing beads and rhinestones onto the front in a starburst pattern.

That Thom Browne coat could be easily re-interpreted with just a line of cone spikes ringing the armscye of a nipped-in gray Victorian-style overcoat.

Hope that gives you some ideas for projects to start right now!
xo
Carly 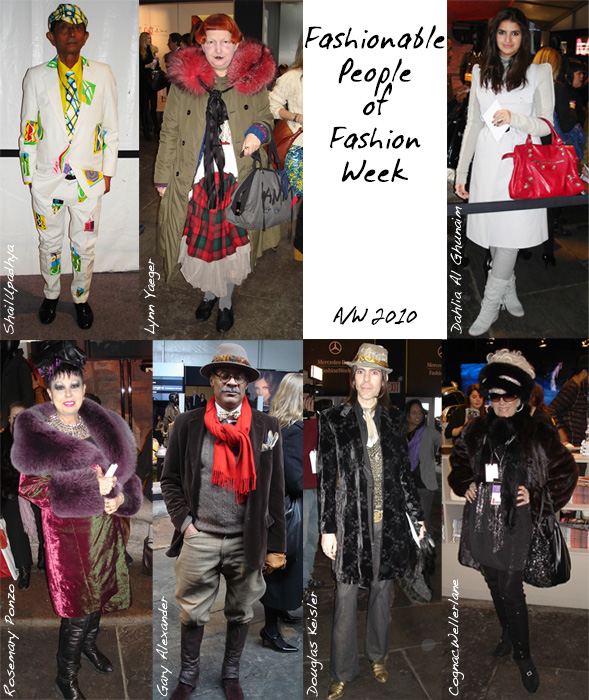 So it was February, #$#$@’in freezing, snowing, and still the most fabulously fashionable people turned up in droves.  Since I’m not there this time around to document, maybe you’d like to see those people from last time (in February, for the Autumn/Winter 2010 shows) who were just so awesome-looking, I had to snap photos of them. 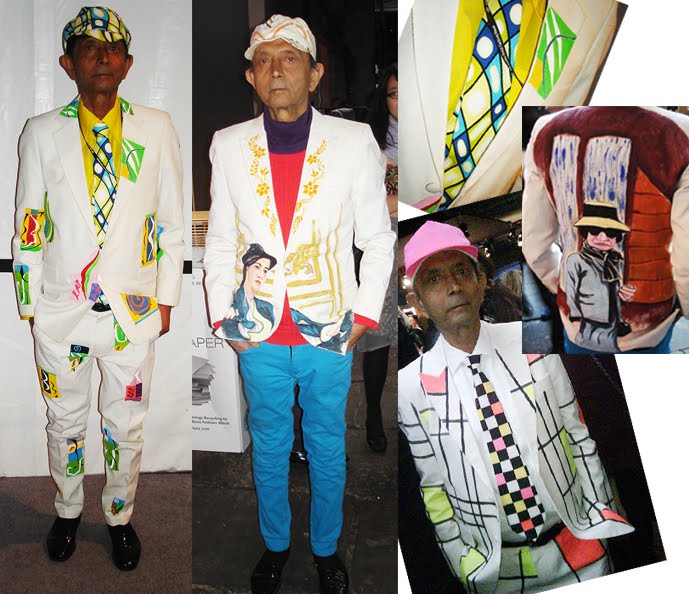 A familiar face in the tents season after season for the last 10 years, the former U.N. representative (!) now works as a stylist to politicians and Wall Street players.  He turned out at the Ecco Domani show to support fellow Nepali Prabal Gurung (fashion’s new IT-boy, according to The Daily).  Last season spotted wearing a Sharpie-decorated suit at the shows, Upadhya came up with the painted suit as his central concept for this most recent Fashion Week.  “I always think if Matisse was a designer instead of a painter, what would his clothes look like?” he said, in reference to the white suit with the patches of lime green paired with the yellow shirt and pop art tie.  He hopes to launch a line soon that reflects his fashion philosophy, and says that he can’t choose a favorite from anything in his closet because “they’re all my babies!” 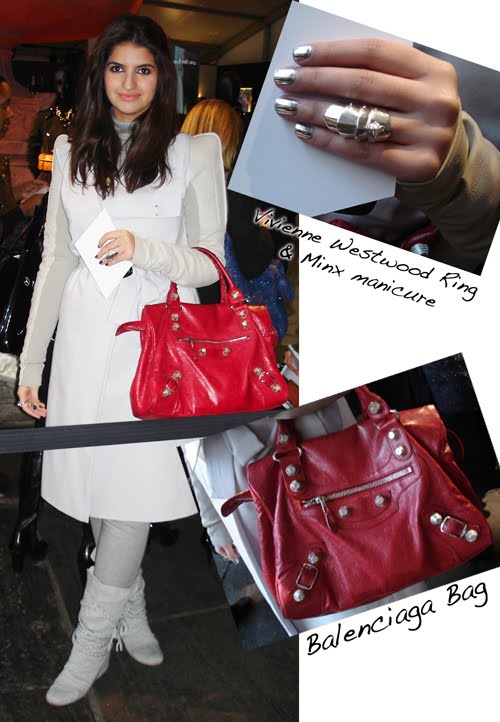 Where do you get your fashion inspiration?

Since I’m the Creative Director of ChicIntution.com, I’m constantly scouring the web for ideas, so it’s no surprise that my fashion inspiration comes from there as well…I’d also have to commend my mother for walking me and my sisters through the basics of style at a young age, her teachings beat any book out there!

They differ from season to season, but mostly Preen,  Phillip Lim, Stella McCartney, and Sass & Bide.  Undiscovered gems that I’m digging are: Unique (a sub-brand by Topshop) and Brigid Catiis.

Any advice for other people on how to be fabulously stylish like yourself?

My only advice would be to follow your instinct.  Fashion is about self-expression! 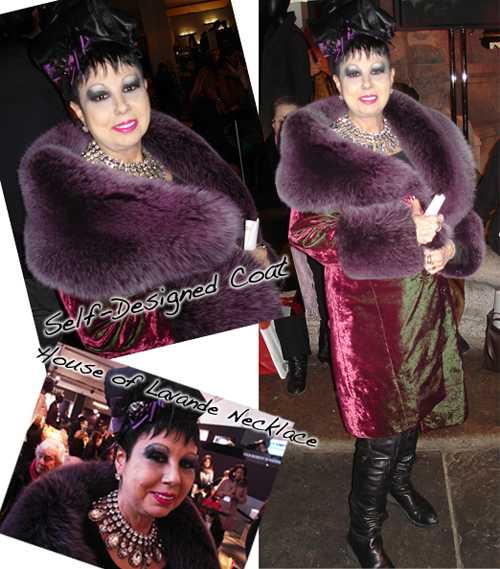 My fashion philosophy: Having a passion for fashion!

Can you tell us what inspires your fabulous style?

Having an imagination and [marching to the beat of] my own drum.  I like to wear what I like to wear.  I do get my inspirations from many fashions but then I put my own spin on it.

TonyCohen was amazing, and I was very, very impressed with Vera Wang this year.

Any advice for other people how to be stylish?

Take a chance, switch things around a bit, and use your imagination!  Give it some thought instead of just throwing things on. 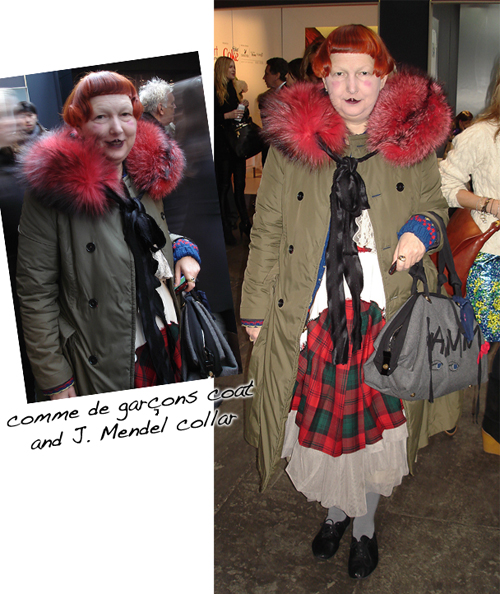 Ignore all trends, just have fun and do what you want and don’t worry what anybody thinks about you.  And don’t spend a lot!

Any advice for the rest of us on how to be fabulously stylish like yourself?

Just be brave…reeeeeeeallly brave.  Brave is the secret! 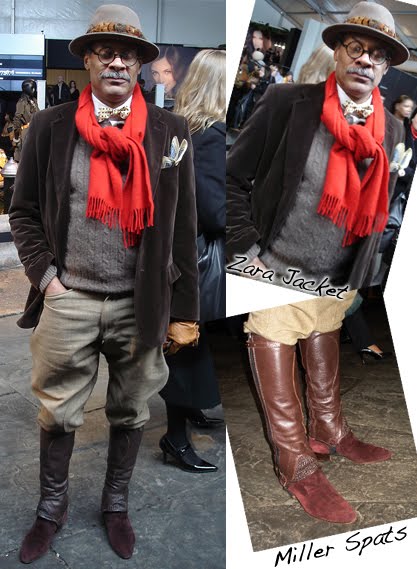 Keep it simple, keep it basic, and keep it conservative.

Any advice for the rest of us on how to be fabulously stylish like yourself?
Just don’t get too caught up in trends or things that won’t last. 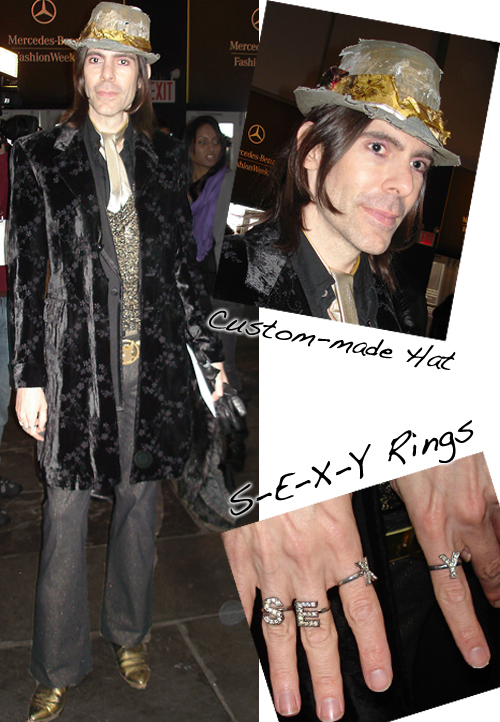 How do you define personal style?

Style should be what suits the individual, what someone feels comfortable with, and always make a statement!

Isaac [Mizrahi], of course…and Alexander McQueen, without a doubt.

Any fashion advice for the rest of us?

What is your Style Philosophy?

I get inspiration from the people in New York, from the designers…[my style is] the collaboration of many designers and looks thrown together.

Any styling advice for us?

Keep to simple, straight colors that blend together like charcoals and blacks…that’s the big trend for Fall 2010: a little silver, maybe a little copper mixed in….silvers and grays go very well together.

xoxox
Carly
P.S. I wrote this article for FashionTribes.com…and it never posted!  Such a bummer.  So I’m sharing it here, majorly after the fact…but I hope you will forgive:-)  I wonder if these fashionistas will be at Lincoln Center this time around??

END_OF_DOCUMENT_TOKEN_TO_BE_REPLACED 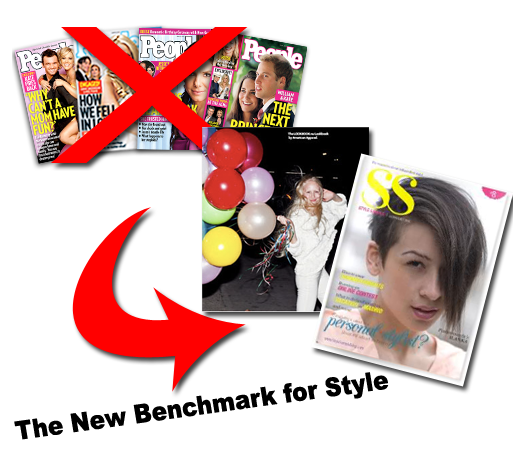 Out with the old, in with the new: Street Style and its Chic Factor.  Goodbye People Magazine…hello, American Apparel lookbook collaboration with Lookbook.nu users and Style Sample Magazine.

Could it have just been a few short years ago that we saw the rise of those snazzy, hyped-up boutiques that advertised their products “As Seen on Audrina Patridge and Kim Kardiashian!” —  Paris Hilton as style icon — and celebrities and demi-lebreties fueling consumer mania?  Once upon a time, the public was hanging on to J. Lo’s every move, snapping up heeled Timberlands and the latest Juicy Couture velour tracksuit (as seen on Pamela Anderson!).  But times are a-changing, it seems, and the wave of interest in A-listers has waned (perhaps in part due to a flailing economy, general disgust towards Hollywood salaries spiraling out of control, the emergence of celebrity stylists and their minions to the media forefront *ahem, Rachel Zoe*, the rise in popularity and box office power of indie films, and more exposure to the PR vehicle behind every star, just to touch on a few factors in all this).  Though what the Stars are doing and Wearing is still hot fodder for many blogs, magazines, talk-shows [and the E! channel’s programming]… the people watching today are smarter, have more access to information than ever before, and have begun to turn away from the carefully constructed circus of image.  Now it seems we’ve entered a completely new era: that of the EveryMan (or, more specifically, EveryWoman)…and now everyone seems to be sitting up and taking notice. 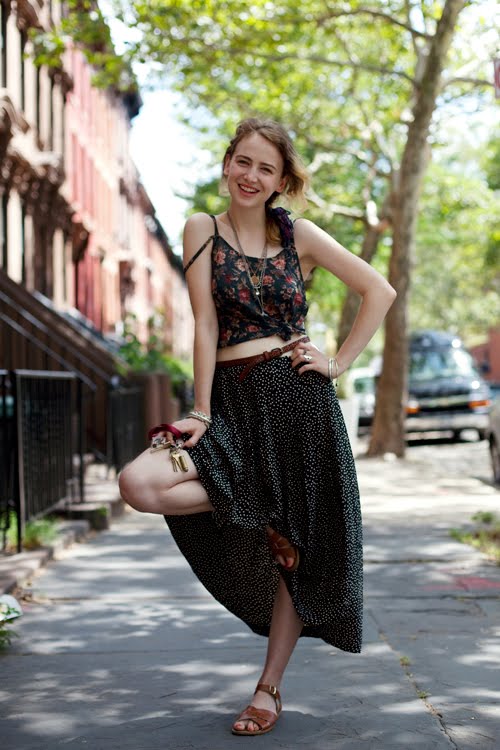 Heralded by the runwawy success of street-style photoblogs such as The Sartorialist and JakandJil.com, and personal style-sharing sites such as Lookbook.nu and Chictopia, in the last 2 years alone there has been an online explosion of sites on the internet devoted to the style of the stylish unknown: the girl (or guy) who has that certain je ne sais quoi about them.

Women check out these blogs and see the Beautiful Stranger.  They check out her outfit details, hairstyle, and makeup.  And sometimes, such style can lead to an impromptu purchase by the onlooker.  And retailers are increasingly taking notice of this street cred influencing consumers.

What with ModCloth sponsoring outfits for many bloggers (so much so that the term “ModCloth Robot” has been floating around the blogosphere for awhile), StyleList and Bluefly’s search for America’s Most Stylish Blogger last Fall where they sent the participants items from Bluefly and had us style them in our own outfits, Ann Taylor LOFT’s campaign partnering with Jessica Schroeder of WhatIWore, and most recently, the newly-launched scrolling functionality of The Gap 1969 Stream photo collage of both models and regular people wearing their Gap jeans. 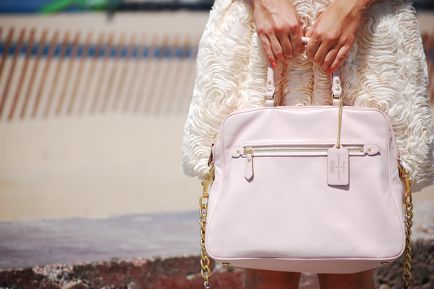 The bag Emily designed in collaboration with Coach, from Cupcakes and Cashmere

It’s no longer just a handful of corporate websites out there – it’s all over the place that we’re seeing the beautiful, almost anonymous stranger showcasing her personal style (which seems so much more attainable to the average person, right?).

Even the Wall Street Journal has picked up on this trend with their recent Seen on the Street: Strangers as Style Icons article (which is an interesting profile on the BeautifulStranger.tv website). 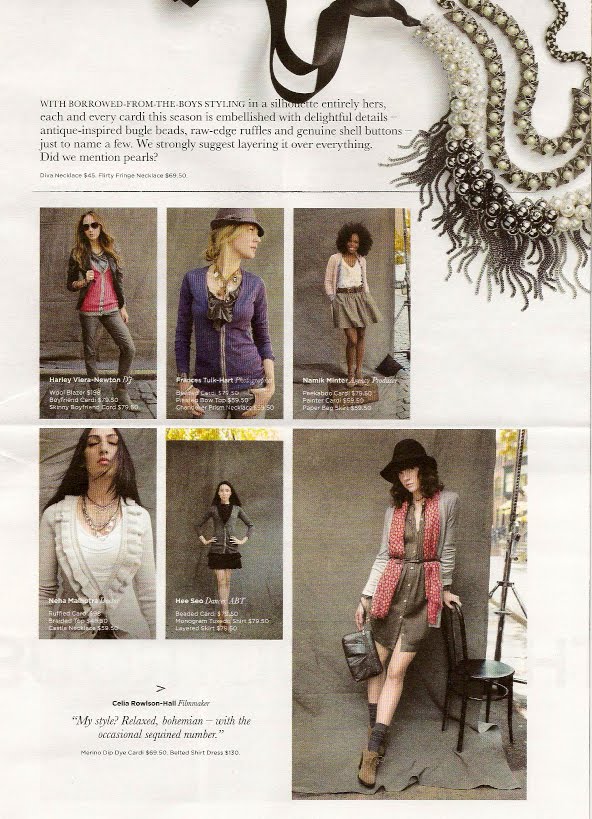 Since I just received Banana Republic’s “Life at Work” Fall catalog (see above), replete with photographs of their products shot on the backs of what appear to be regular people (along with their job descriptions next to them – and not just “model” mind you!)…just how strong a trend Street Style has become is an issue that’s been on my mind lately.

So here it’s opened up to you: is Street Style the new litmus test of What’s Fashionable?  Do you pay more attention to the celebrities and A-listers, models during their down time, or what that cool-looking Beautiful Stranger is wearing in some street snapshot somewhere?  Is Street Style the new determinate of chic?