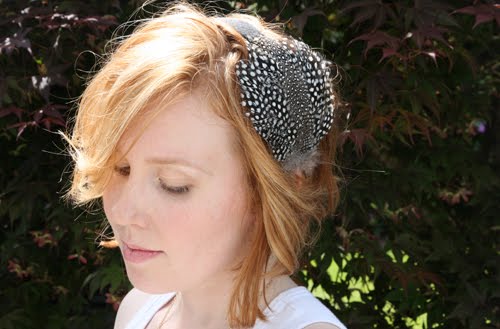 So you can buy your own even at Fred Flare ($18) or Macy’s now…but early this Spring I couldn’t find these anywhere except online for the staggering price of $72 or something (this was somewhat before the trend broke and Lucky Magazine had showcased one of those headbands in January or so, sparking my interest). So I made my own with a pack of feathers bought at Michael’s for $2.99 (I think they’re guinea?? but don’t quote me on it LOL), and a plain black headband from Claire’s for $3.50.

I cut out an oval from a stiff piece of felt, and hot-glued the feathers onto it, beginning at the top of the oval and working my way to the bottom. This created a nice overlap and I was able to use the fluffy down feathers at the bottom that goes right above the ear, so I look like I have some nice old-man fuzz growing out of my ear there – exactly what I was going for!! 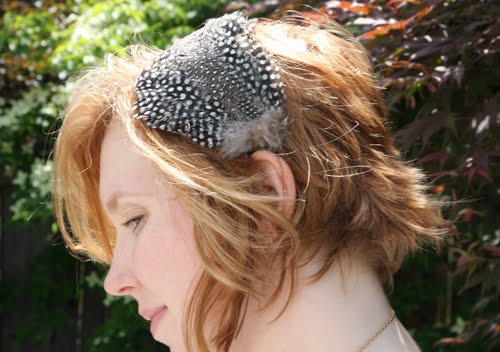 Then I cut out another oval of felt and sandwiched the headband in-between the two ovals, to create a stiff curve. The whole process took about an hour because I was picky about the placement of the feathers.

Of course, I could have just bought a hat pad at Michael’s (which they NOW carry, 6 months after I completed my project) or online at plumesnfeathers.com. (But then again DIY’ing it really gives you complete control over the types of feathers and the placement of them…so to each her own!)