The Uniform Project is Over! And the New-and-Improved U.P. Dress for Sale!

watch the video above if you want to see the full year of 365 outfits Sheena styled.

As you guys probably noticed from an earlier post of mine, I’ve been following along with The Uniform Project for the past year.

Though more than once I’ve thought, “Gosh, why didn’t I think of that first?”, the idea for the site is pure genius.  Raising awareness for a little to unknown cause through a fashion dilemma: how to style the same dress differently for every single day of the year.  That’s 365 days, wearing the same garment daily.

Could you do it?

Besides also tying in to the concepts of eco-friendliness (same item in different outfits; stretching what you have to work in different situations) and charity – it’s an idea that hinges on the explosion in popularity of the street style blog and photo log.  Plus, it’s FABULOUS marketing for the designer of the dress.  Research and the theory of effective frequency has shown that a consumer has to be exposed to an image about 3 times before the ad is retained in the subconscious; and some time around the 12th-13th exposure the consumer begins to feel the product has value and begins to want it.  (Though the rule of 13 was coined back in 1885 this idea is often still quoted today.)

The first time I saw the Uniform Project dress, I thought “basic little black dress; kind of cute but nothing too special.”  The second and third times, I probably thought the same thing. 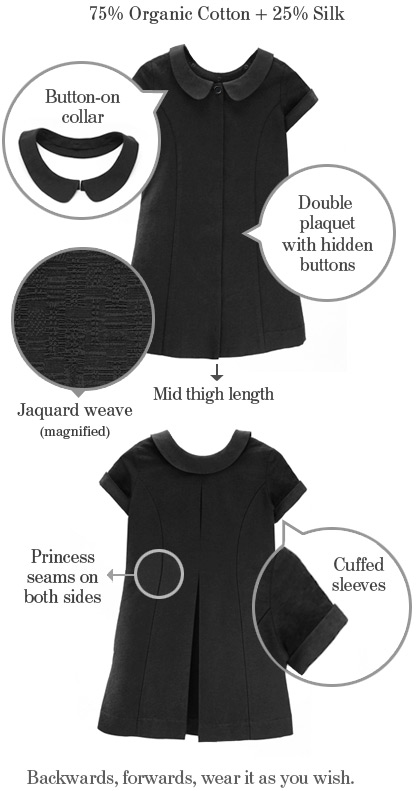 This is the new version of the dress available, in organic cotton + silk.

As I kept returning to the site and seeing Sheena’s myriad of styling methods for the same garment, over and over again, I began to want the dress.  What an incredibly persuasive piece of subversive advertising!!  (How many of you started to want this dress too?)

When it did finally go on sale I balked at the price [$150].  (I know, I do try to support struggling designers when I can, but I couldn’t really justify a purchase of the dress at that price.)

So when they also offered the PATTERN (for the new and improved U.P. Dress), I snapped it up.  Yes, the pattern is a little basic and I could easily just purchase a similar pattern from the sewing store and alter it, but I did want to contribute to the cause of helping to send impoverished Indian children to school.  And in meaner economic terms $20 is much easier to justify to myself (and Hub, since we share a bank account!) than $150.

I can’t WAIT until it arrives!  Just in time for Fall.  (As you can see, I vacillate between the selfless, heartfelt need to help those less fortunate and shallow, rampant consumerism.  Yay!)

And you know what color I’m going to sew it in?  Why, black of course!