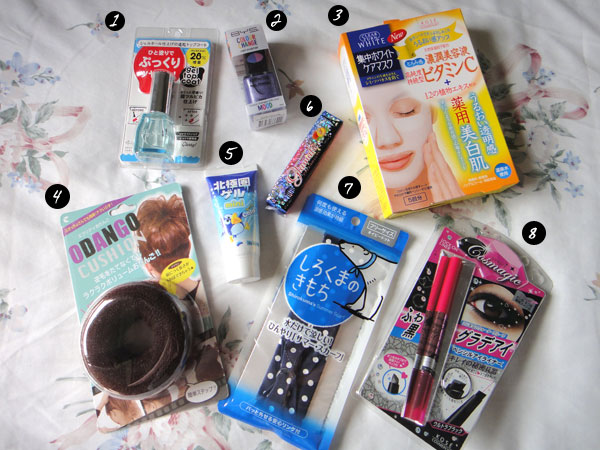 I love hitting up the drugstore whenever I’m in Japan to browse all the new and uniquely Japanese products available.  Some never even make it to the U.S., so it’s a treat to scoop up the latest.  Above are some of my recent finds:

1. Pukkuri Faux Gel Nail Topcoat With CalGel nails being the norm amongst the nail-art-loving Japanese, some girls want to give their natural nails a break, but still have the plumped-up, glossy, smooth look to their nails.  This topcoat promises to create a similar look to gel nails, and yet is removable with regular nail polish remover. 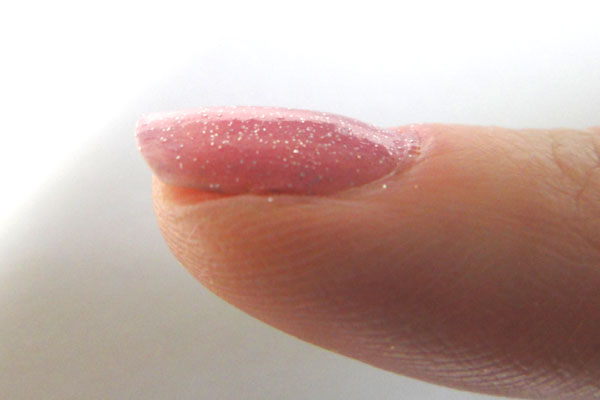 I admit I don’t notice much of a difference between this and a regular topcoat, but it certainly is thick and seals in glittery polishes well. 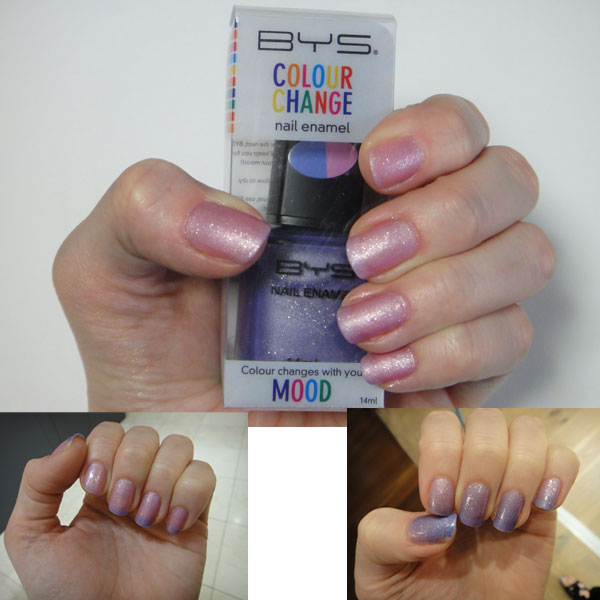 2. BYS Color Change Nail Enamel I had to sneak this one in, but I think it’s actually an Australian brand.  (Aussie readers, correct me if I’m wrong!!)  I remember color change nail polishes being popular back in the early 90’s (I think TOMA made a good one), but I haven’t seen one for ages.  This went on rather pink to my dismay, but I found that exposure to cold turned it purple.  It didn’t quite produce the “gradient” color that the bottle advertised, even though my nails are med-long.

3. KOSE Concentrated Whitening Mask I believe one component in the average Japanese girl’s skincare routine that is essential to their beautiful complexions is the frequent usage of facial masks.  Collagen-Infused; Vitamin-Enriched; Whitening; Smoothing; Softening; Brightening; Hyaluronic-Acid-Filled; Packed with Minerals – there are so many different types available I couldn’t ever detail all of them.  This one makes my skin feel like Lil Tot’s bottom (which is a good thing!!;-)

4. Odango Cushion Though it reminds me of a tawashi scrubber (usually used for cleaning toilets in Japan!!), this is a base for a nice, fluffy bun. 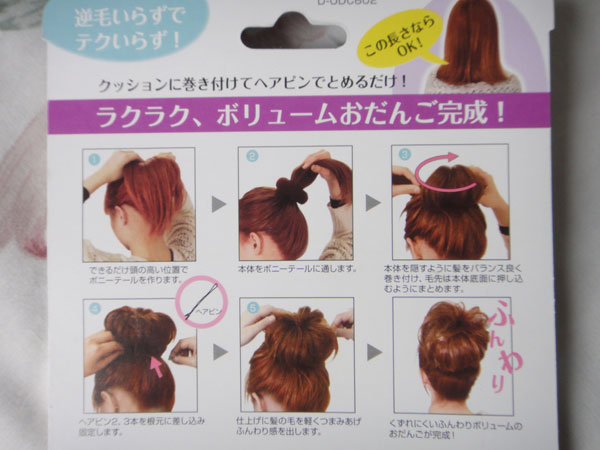 I don’t yet have a good picture of me wearing it, but it takes my sad little topknot into puffy, fluffy mayhem.  Lovely!

5. Cooling Gel In the unbearably hot Tokyo summer, cooling products are rocketing off the shelves of the stores.  Hub has a cooling body spray with menthol in it that he’s partial to, and this cooling gel works similarly.  I spread it on the back of my neck and on the insides of my elbows for ultimate relief. (Of course, they only provide cool relief for about 10-20 minutes until you start to feel the sticky, oppressive heat again.)

6. “Glamorous” gum A gum created as a collaboration between fashion designer KEITA MARUYAMA and Lotte (I think).  It’s apricot-flavored.  Imagine if Marc Jacobs or Michael Kors collaborated with Hubba Bubba!! 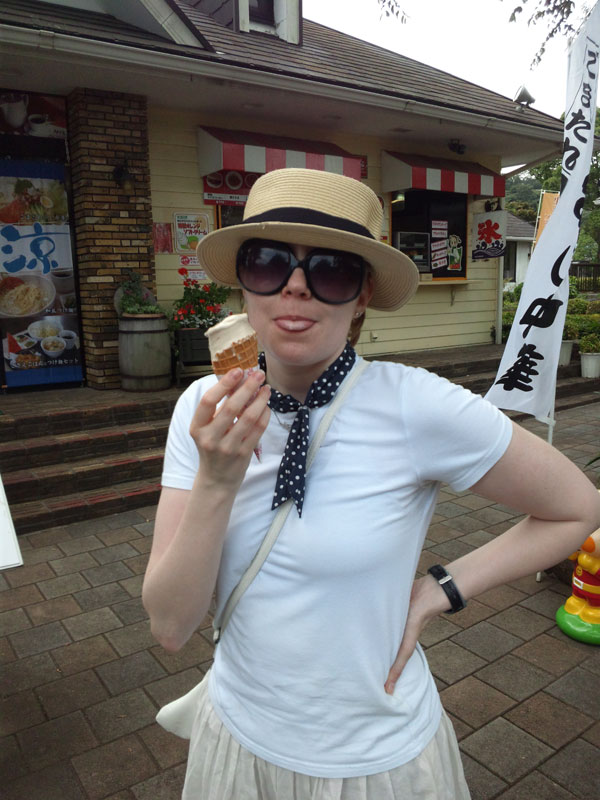 7. Cooling Neck-Wrap It’s so true that your body temperature is affected by what you wear on your neck!!  I never really thought about it but once I experienced this wrap it’s like a difference of night and day.  Inside the cloth is water-absorbing cooling particles (similar to gel ice-packs), and they plump up when soaked in water.  I’ve been wearing it whenever I’m out and about, and though not exactly fashionable per se, it definitely keeps me cool!

8. Gradation Eye Pencil Creates the smoky eye perfectly; one end is a wedge-shaped kohl pencil; the other end is a large wedge-shaped hard rubber tip (not a sponge, that tends to soak up the color you just laid down) that you rub over the line to create a smudgy smoky eye.  Why have I never seen this before in the US??! 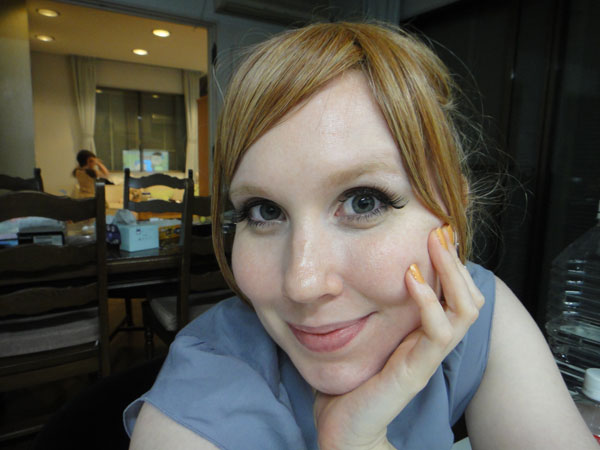 And in addition, here are a couple more products I’ve seen: 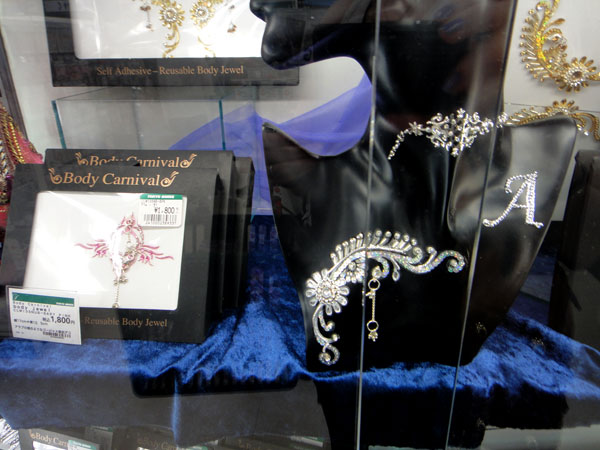 Stick-on Body Jewels with Dangling Chain and Charms: Perfect for when Carnivale comes through your town. 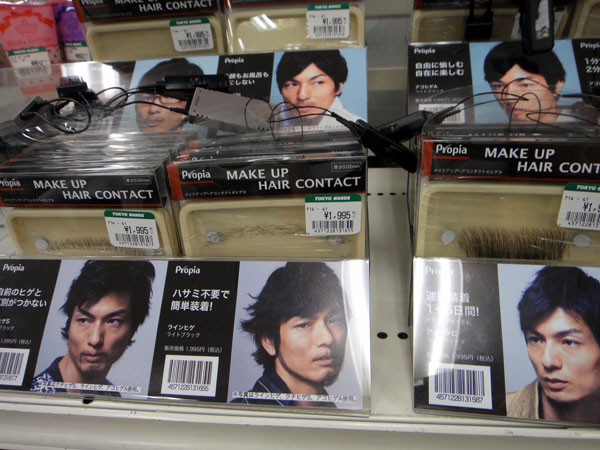 Stick-on Faux Mustaches and Goatees: For when you just can’t seem to grow facial hair.