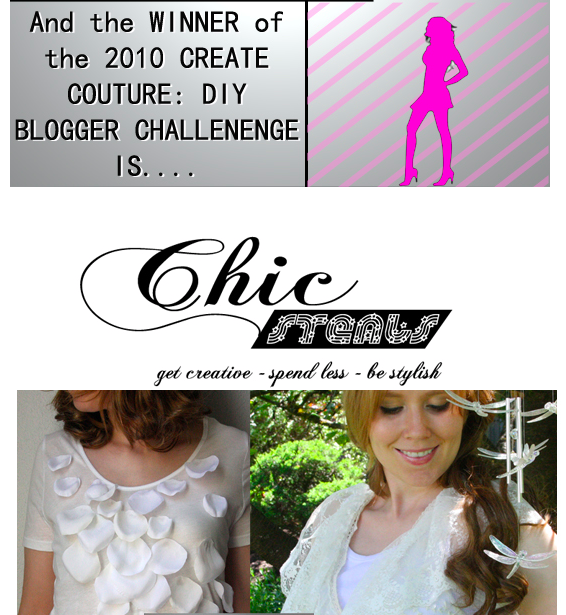 Not particularly eloquent at the moment…

But it looks like I WON THE CREATE COUTURE CHALLENGE!  (Click to read the recap on the NYDS Blog)

In fact, I had the NYDS Blog open in a Forefox tab for a while this evening, and had been refreshing it in-between writing my previous post.  I figured the NYDS staff wouldn’t post anything until tomorrow anyway, what with it being the middle of the night and all.

But then I saw their teaser post, so I clicked on “Continue Reading…“, heart pounding in my chest, steeling myself for the name “FVNCY” or “…love, Maegan” because I was sure, beyond a shadow of a doubt, that either blog would be declared the winner.  (In fact, I was utterly sure the moment I saw the participating blogs announced.  I’m somewhat of a pessimist, can you tell??)

All I can say is that I’m so shocked to have won – so amazed and humbled by the outpouring of support and all your voting…it means so much to me, it really and truly does!

I really wanted that magazine interview – I’ve been designing a couple new pieces I was thinking of stocking my Etsy store with (and giving the store a nice overhaul), in the case that I actually won and could mention that in the interview.  But I was hesitating, wondering if it was worth it ordering all the components and purchasing fabrics and making prototypes, if I would not be able to promote them effectively, or if there was no one who wanted them.  I made the mistake before of making the pieces before I had tested them, and before I truly had a market for them – and ended up burned financially, with a lot of stock on my hands.  It was a big setback.  So I’ve learned to be cautious!

Thank you so much to all who voted (it was such a close margin, every single vote counted!!!) – you’ve helped me that much closer to my dreams and I can’t thank you enough.  And to Style Sample Magazine, and New York Design Shop, for sponsoring this amazing competition – I couldn’t be more happy or grateful!  You’ll all be seeing some new jewelry and accessories from me very, very soon!

Thank you so much, from the bottom of my heart!
xoxox
Carly