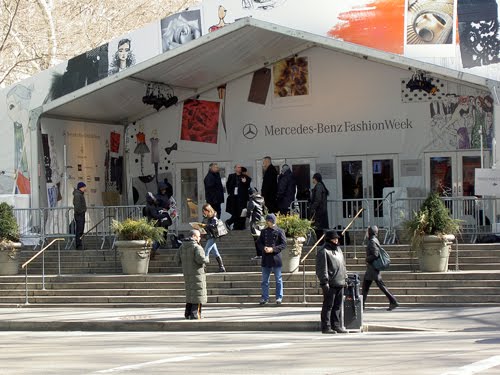 Well, I, Carly, am – as a FashionTribes Contributing Editor.  (Doesn’t that sound all pompous and deserving of capitalization?LOL:-)

I went last February and it was a blast!  At the time I wasn’t blogging with the fervor that I am now; I just was contributing weekly articles to my editor over at FashionTribes.com.  I decided to make the trip to NYC in February 2009 to help her cover the shows. 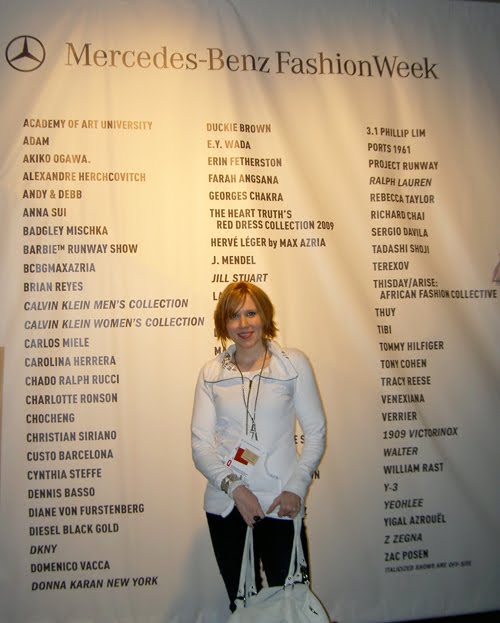 I grew up in New Jersey, and so had been to NY a couple times on school field trips when I was a kid, and then again in 2002 on a trip with Hub and the parents-in-law just before we moved to Hawaii.  (We stayed at the Plaza Hotel, just before they tore it down.:-(  Well, the room was threadbare, stained, and the sink leaked a pool of water into the bathroom.  I felt sorry that they couldn’t have fixed those things, but yes, the hotel seemed like it had seen better days.)

I also went to New York on a 4-day trip in Spring 2007 when I was a finalist in the Bacardi Limon Express Your Style Competition and they flew me and four other finalists to New York to compete in a live cut-and-sew event.  Kind of like Project Runway, they said…but it really…wasn’t.

But I had never experienced the city like this!

“BARBIE” spelled out in…what else – Barbies! to celebrate the fashion icon’s 50th anniversary, inside the tents. 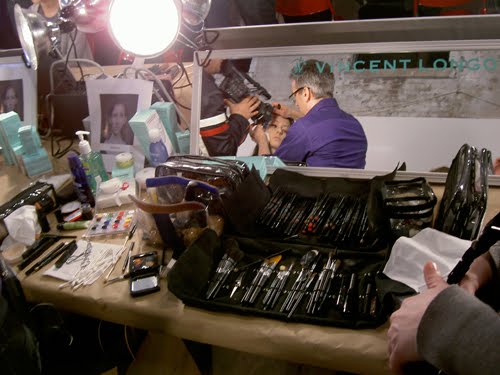 What an experience!  I ended up attending 10 runway shows and submitting 11 articles to my editor.  I also conducted numerous interviews with people: Yigal Azrouel (my first interview EVER – I was super-nervous, sweating like crazy, and babbling like some insane gibbon), Tina Turnbow for Tarte Cosmetics (who told me she LOVED my eye makeup – who applied it??  Um…Avon in a Wink Instant Eyeshadow Sheets

Taken by TLo from Project Rungay. 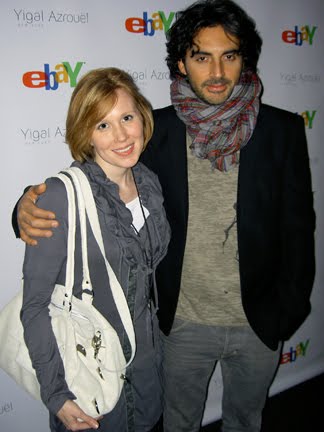 Excuse me while I name-drop a little;-)

I was bummed that not a single article I wrote was posted onto the FashionTribes site, but it’s really all at my editor’s discretion, and I got the feeling that she wasn’t really interested in a “this show had these pieces” sort of thing – which isn’t really what her site is about.  Ah well.  I shared write-ups here on Chic Steals of the runway shows from Vena Cava, Yigal Azrouel, Lela Rose, PORTS 1961, G-Star RAW, Christian Siriano, Leanne Marshal, and Academy of Art University.

Some highlights from the trip: 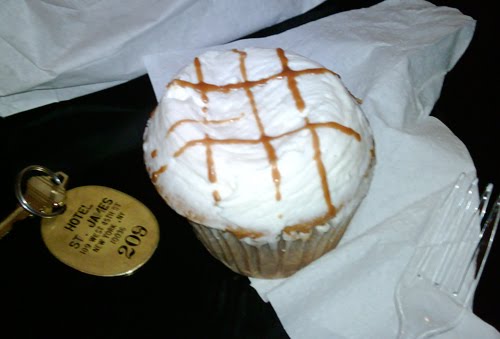 A caramel apple cupcake from Crumbs Bake Shop.  Funny story – I saw a photo of this cupcake in a 2003 InStyle Magazine – where it was listed as “Jay-Z’s favorite cupcake when he is New York City.”  I thought it looked delish, and saved the clipping.  Somehow it managed to survive a move to Hawaii and then a move to Oregon – and finally, 6 years later I happened across the magazine clipping again and said, “when I’m in New York for Fashion Week, I’m having this cupcake!”  I paced myself too – I managed to wait until the third day I was there before I ate it – and I even set aside a whole hour to do so!  When you wait SIX YEARS for something…;-) 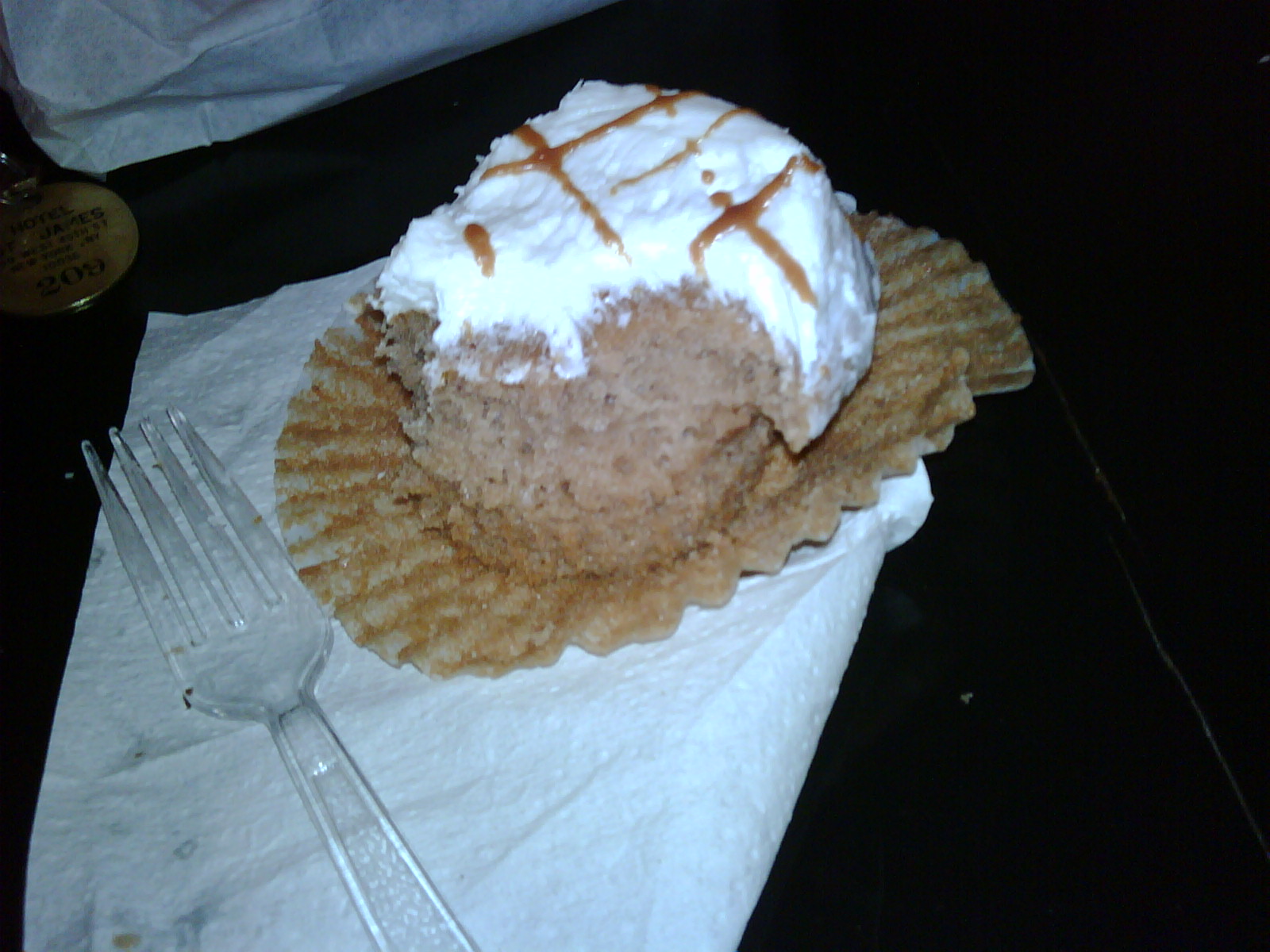 Sitting front row at the Academy of Arts University runway show.  Only show I got to sit front row for.

Famous people: Tori Spelling causing a near-riot just by arriving at Christian Siriano’s show; Anna Wintour sitting front-row at the PORTS 1961 show; Miss J. Alexander looking trashed by Day 6 of the shows (“You look exhuasted – you poor thing!” I told him, and he could barely nod); me accosting Robert Verdi and Fern Mallis with the bag I spent 6 weeks sewing every night; Tim Gunn graciously answering questions after Christian Siriano’s show; spent 2 hours talking with Steven Rosengard from Project Runway Season 5 (the sweetest person you could imagine!!) – my editor was talking to him about perhaps writing a series of articles for the site, but it never seemed to materialize; going to Leanne Marshall’s show (Project Runway Season 5 winner) and also meeting Suede there (he even wished me happy birthday last month…awwww; such a sweetie!); Real Housewives of NYC Leann de Lesseps sitting first row and her Juliette Lewis-wannabe 20-years-younger girlfriend sitting 2 rows behind her at the PORTS show…and numerous editors and other famous people that I just didn’t recognize as well.  Benecio del Toro at G-STAR RAW taking the stage and reading song lyrics – strangely moving. 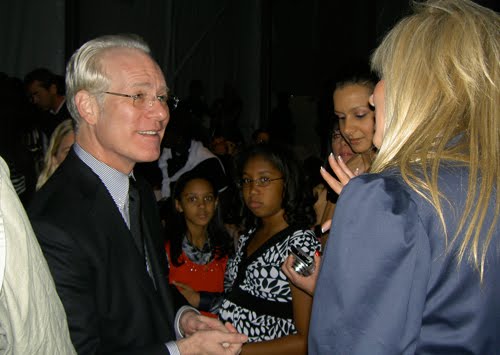 The swag bag from Vena Cava.  I still to this day use the canvas tote for groceries at glamorous Fred Meyer.

Thrilling over the abundant swag bag at Vena Cava (my first show) and then expecting it at every show I went to afterwards – and feeling totally let down because there wasn’t anything else except at the Verrier show!  But at the end of the week I got a press swag bag full of liquor and alcoholic products, which I bequeathed on a well-deserving liquor-liking friend. 😉

I wore my DIY Burberry studded belt over my black trench and was feeling particularly fashionably fabulous the day I arrived in NYC – and I rained buttons up 6th avenue…I was missing 3 when I finally noticed.

I dragged my 70 lb. suitcase all the way from Bryant Park to Brighton Beach (next to Coney Island in Brooklyn, where I was staying with a friend) BY SUBWAY.  The people in Mahattan were super-nice to me, one guy even insisting on helping me down 3 flights of stairs into the subway; other people opening doors, one lady swiping her metrocard when I couldn’t get mine to work in the turnstile…but the closer I got to Brooklyn, the less willing to help people became.  Two days later, when I was dragging said 70-pounder BACK to Manhattan up two flights of stairs to the entrance to the Brighton Beach B train – a bunch of old Russian men gathered and watched me as I struggled.  “Whatcha doin lady?” one of them asked, with much gesturing.  (You should hear me say that in my Russian accent impression – it’s pretty cool.  Not.)  I was surprised and amazed at how nice everyone was to me while I was in New York…well, except the strangers in Brighton Beach. 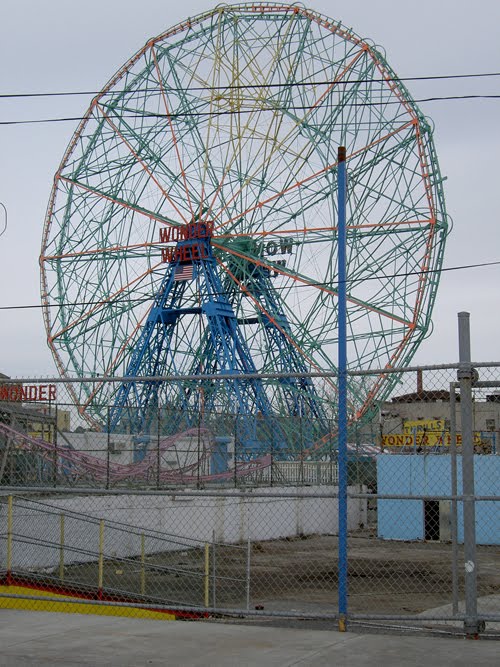 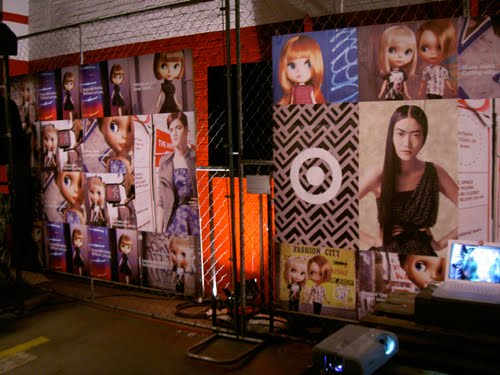 Between shows I hightailed it over to this creepy warehouse where they were having the Alexander McQueen for Target preview event where editors were invited to shop the collection – I got into an unmarked black taxicab and truly thought I was being kidnapped on the way there…the guy got lost and then had the gall to charge me almost 3 times what the fare was back to BP when I used a YellowCab…learned my lesson!  (And bought a crappily-made McQueen for Target jumpsuit for my editor too.) 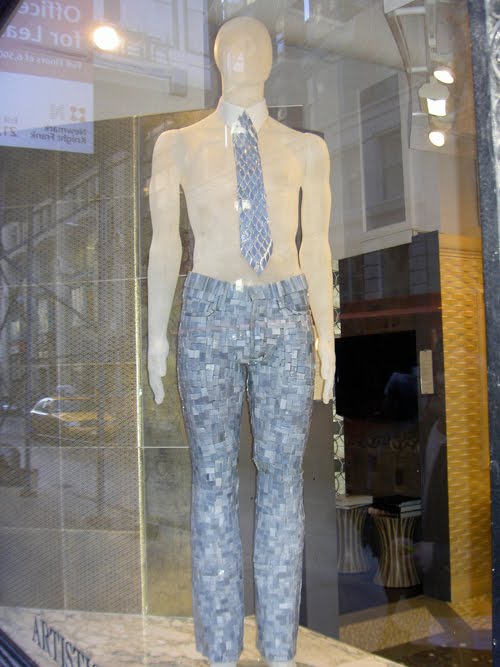 A pair of pants made entirely of tiles at a tile showroom.  Fab!  (But probably ridiculously heavy.:-)

For the first time in my life I bought a pack of hot nuts – cashews – from a nut-truck on the street.  (It sounds a little risque, I know.)  Yum-O!  Now I am addicted!

Standing next to catwalk models really made me realize: they truly are genetic freaks!  (I don’t mean anything hurtful by that comment BTW.)  Someone had told me that once and I really couldn’t understand what they meant.  I mean, how tall and think could they really be?  I’m about average height (5’6″) and have been around models before – modelled in Tokyo about 10 years ago, cast models for m
y runway show when I launched my clothing line a couple years back…but high-fashion catwalk models, I found, were a whole different breed altogether.  When I was in the same room as a bunch of them, backstage as they were getting ready for the Abaete show, all of a sudden that generalization made sense.  So leggy, insanely, unbelievably thin, striking facial features – gorgeous skin…it was difficult to stop staring at them because they literally looked like beings from another planet…well-dressed, impeccably-made-up aliens… I was kind of goggling up at them for most of the time, wondering how they moved without falling over or snapping in two they were so emaciated.   In.SANE.

Getting a fashion sketch done by an artist in the tents (sponsored by Chambord – he was doing sketches for anyone who asked)…along with my fabulous handmade bag. 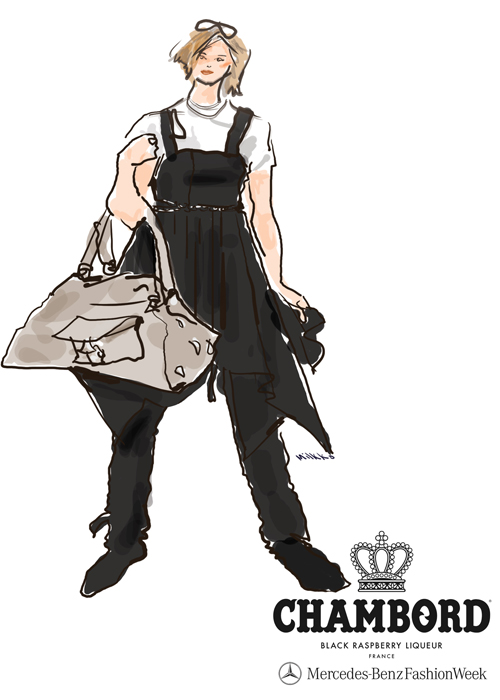 So anyhoo – I’ll be going into the fray again in two weeks’ time…so expect much on-the-spot happenings, photos, and updates from NYC come Feb. 13!

There’s tons to cover and I’ll be right there – bringing you gals straight to the action!
Wish me luck:-)
xoxoxo
Carly