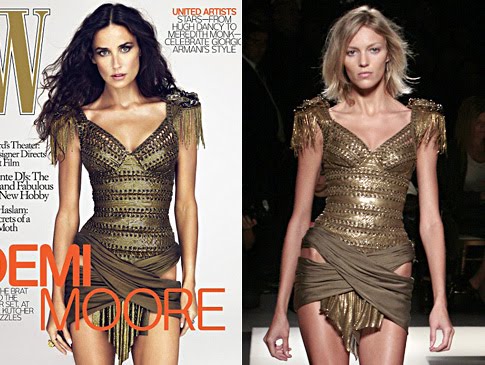 I’m sure you guys have already seen this floating around on the Internet.

Demi Moore’s incredibly-Photoshopped face and body on the cover of W Magazine has had many blogs a-buzz this past month.

First people were aghast at her face – because, simply put, it doesn’t look like Demi Moore. Oh sure, her features are kind of in the correct position, but her nose looks different, faceline is sharp, mouth is strangely-shaped, skin is taught and overly lit…she looks like an alien. (Many thought it was Courteney Cox on the cover at first glance.)

Secondly, many bloggers termed it the “worst Photoshop job ever,” claiming the retouching artist had removed a portion of her left leg/hip area and not corrected the mistake.

Now, the leg thing didn’t bother me – the body itself is kind of bony, the fabric is bunched up at the hip and to me the line of the leg looks fine. But the face is indeed shocking – almost unrecognizeable.

I mean, are these the same person???

And, Demi Moore, an avid Twitter user, Tweeted her outrage at the accusations:”My hips were not touched…it’s just the way u have ur hip kinda swung to one side,” Moore tweeted after catching wind of the rumor. “y can noone see this!? Idiots!”

Moore had one more thing to say about the shoot.

“I love the pic and can only say I wish I had good lighting like that following me around all day!!” she added.

Just last week the latest to hit the fan was over on LiveJournal, where OhNoTheyDidn’t posted a conspiracy theory regarding the shoot…allegating that model Anja Rubrik’s body had been used for the cover with Demi Moore’s head Photoshopped on top. 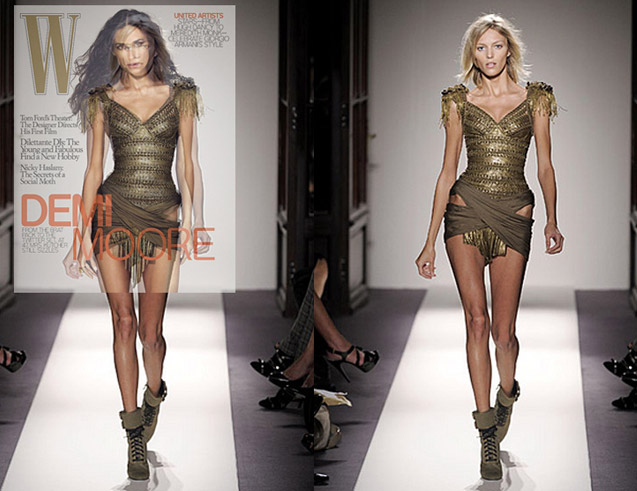 Strikingly similar. Is it possible? After much peering and pondering, I’ve decided that it’s highly unlikely. Beyond a shadow of a doubt? Don’t know why they would have used a runway shot for a mag cover…then Photoshopped the dress on top (notice the sleeve fringe is different in the Demi Moore cover shot). Anja’s arms would also have to have been shortened to jive with Demi Moore’s body proportions. The similarity is eerie, though.

In was reported in TopNews.in that LA-based photographer Anthony Citrano has offered up 5000 dollars to charity if she proves that the pictures are original; insisting that the photos on the cover and in the spread have been retouched.

“I feel bad that Demi is on defense – she should not have to defend other people”s mistakes; W Magazine should be addressing this rather than her,” the Daily Telegraph quoted Citrano as telling the Confidential.

“Having said that, she did raise the stakes considerably yesterday by posting what she claims is the original unretouched shot, along with the accusation that ”these people” (presumably me) are ”bullsh**ting”.

“Well, whether or not her hip was botched, I do not believe for a moment that the image Demi posted yesterday is the original shot.

“If she”s aware of that – and I expect she is – it”s irresponsible (and silly) of her to make that assertion. So, I”ll see her move and raise her 5,000 dollars: if the shot she posted yesterday is really the unretouched original, I will donate 5,000 dollars to a charity of her choosing.

The photographers on the shoot were apparently Mert Alas & Marcus Piggott. Although W has a history of using master retoucher Pascal Dangin for its celebrity covers and fashion editorials, the magazine’s rep said that the retouching was done (and it was done) in-house by Alas and Piggott’s staff. (source)

So who’s on the level? Now that W Mag has come out and said the photo was retouched – how will Demi backpedal? What will happen to that $5000? Will she take the bait?

My 2cents? Um, heavily, ridiculously retouched-both in face and Anja-Rubrik-esque body. Do not believe your eyes. Photoshop [and Demi Moore, and W Magazine] lies.

I was wearing minimal makeup in the photo above. Bad lighting, ageing, whatever…I look tired and old and decrepit. 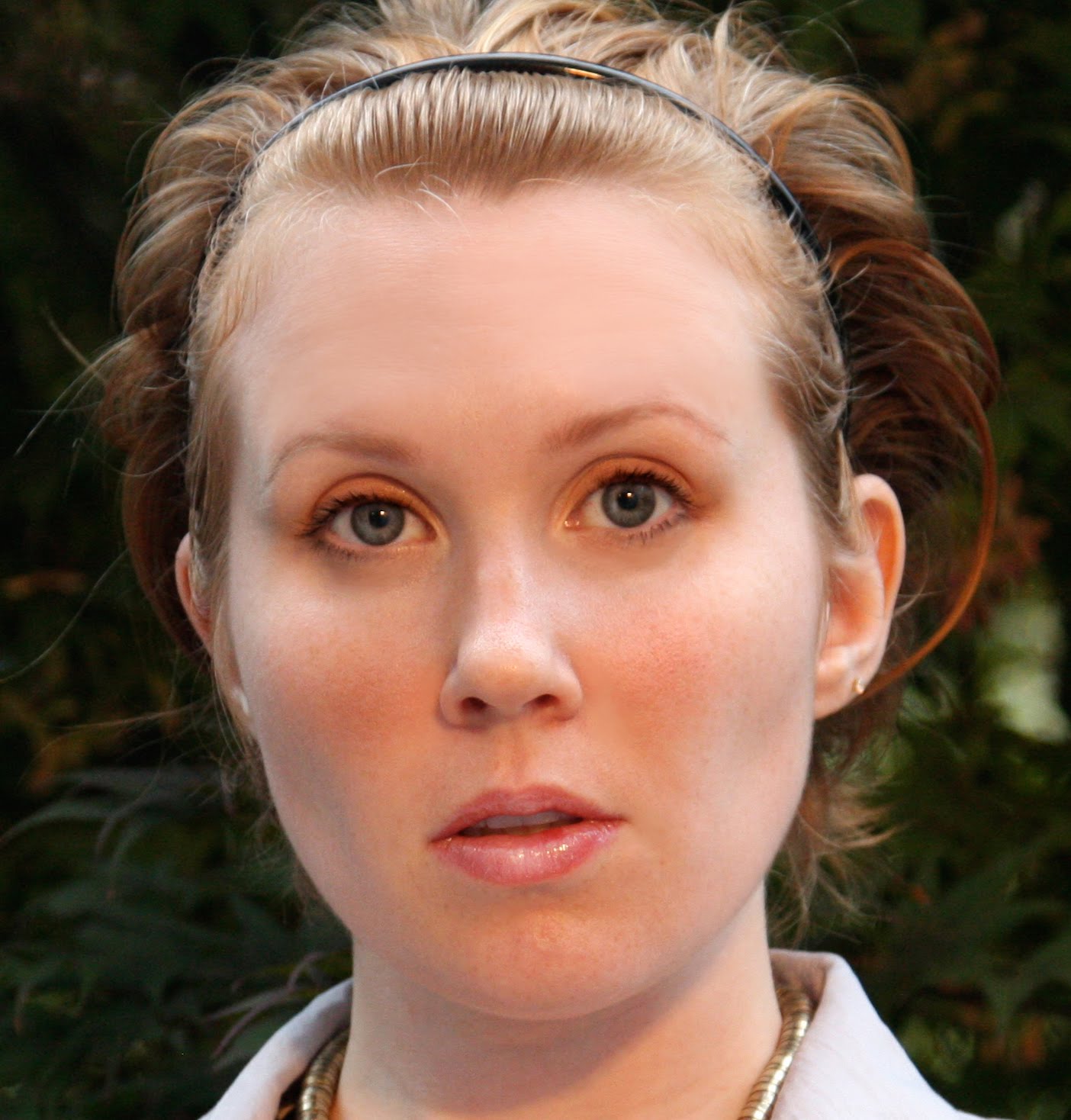 Features darkened in Photoshop; eyes lightened; skin airbrushed, hollows smoothed, and superficial flaws removed. My face is now striking and jumps out at you. 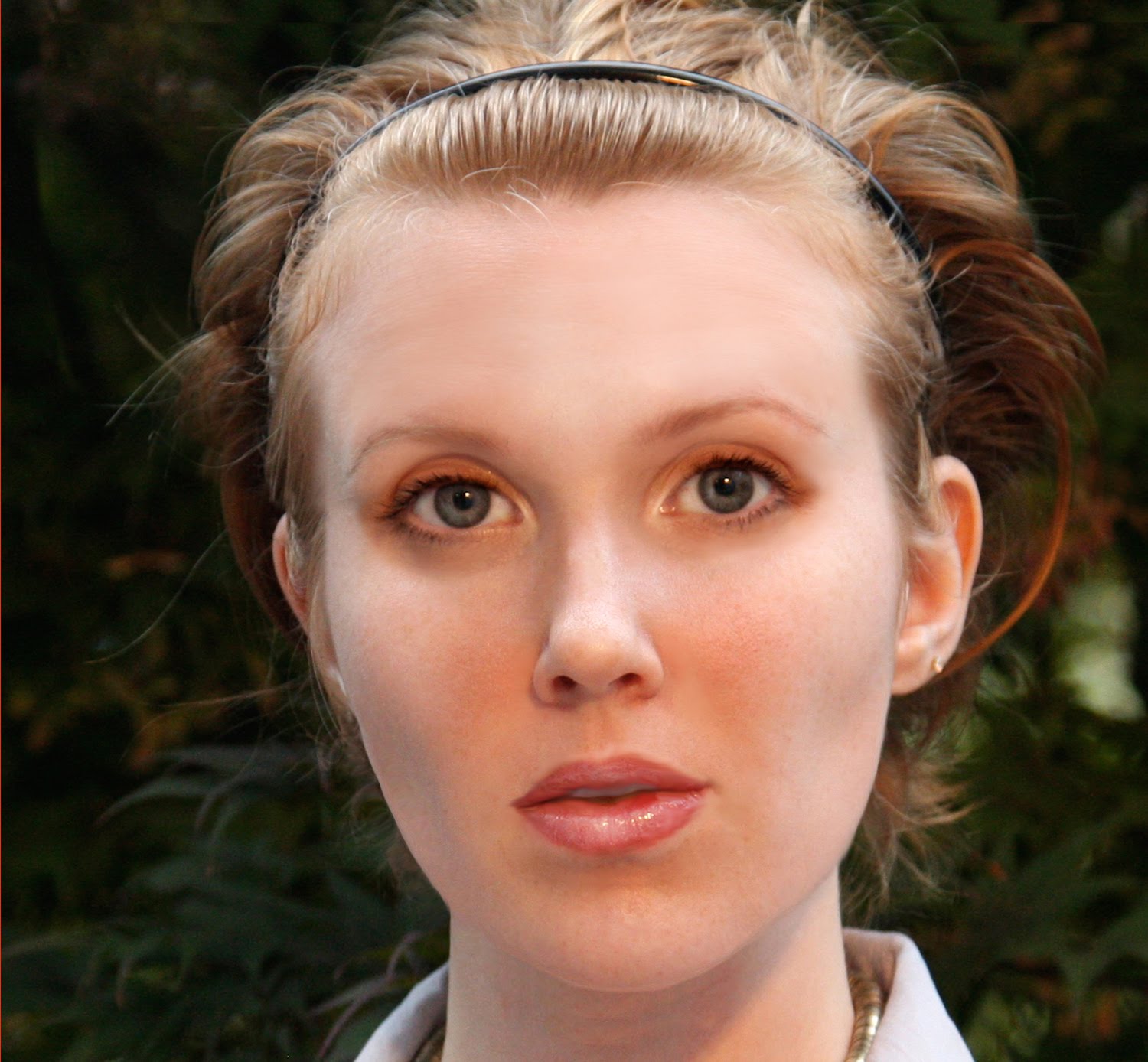 The Before and After. 40 minutes of loving touches a la Photoshop and I have a brand new look! I actually resemble a brand new person. If only plastic surgery could alter the location of my eyes in my skull I’d be that much closer to being model-gorgeous. Ready for your product endorsement deals now, mmmmmkay?;-)
Really freakin’ cool piece of software – really powerful – and absolutely a must when it comes to prepping images for print. W Mag claims they only “did not do anything unusual or out of the ordinary on Demi Moore for the photo on the cover of W. Demi is an extraordinary beautiful woman and we feel our cover reflects that”… The question is… le=”font-weight:bold;”>how much Photoshop is too much? When you can do just about anything to someone’s photo nowadays – even create a face that doesn’t exist – when does it stop being a “real image?”

For further reading (and giggles) see the blog Photoshop Disasters.