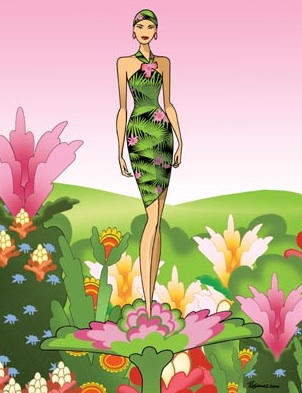 The recent Portland Fashion Week showcased 5 days of fashion with a conscience. From printing promotional material on recycled paper printed with soy-based inks, to a nail-free bamboo runway, to LED lighting which required no electrical tape – thus saving approximately 3000 rolls from ending up in landfills – everything about the event was consistently on-message. Sponsorship included Lufthansa, SPIN Magazine, 24Notion, and Fashion Wire Press – demonstrating that a growing mainstream interest in supporting green fashion. We were fully in support of the gift bag: a reusable tote stocked with goodies from Boots, Honest Tea, Lush, and local fave Missionary Chocolates vegan truffles!Held in the northwest corner of the city at the Vigor Industrial Shipyards, local, national, and international designers congregated to present their Spring/Summer 2010 Collections and continue pioneering the standard for eco-friendly clothing and ethical business practices worldwide. 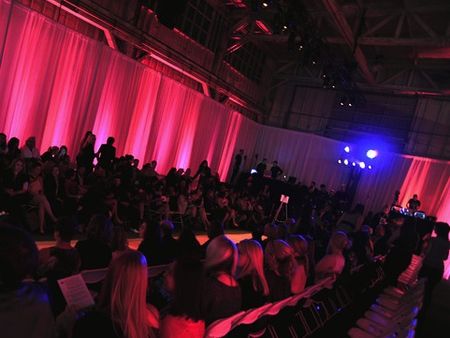 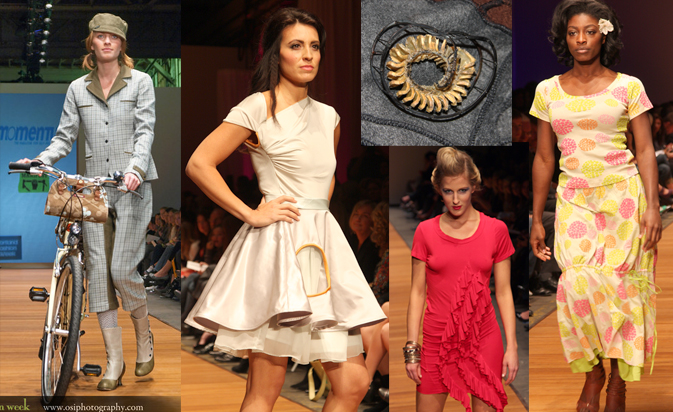 Wednesday, Oct. 7 saw movement-friendly activewear such as Gersemi of Sweden and Icebreaker of New Zealand, but it was local Portland-based Defyance Clothing which was the night’s standout. The label showcased a collection combining high-performance, high-tech fabrics with fashion, fit and function – not a tiny feat, considering the Northwest’s rep for baggy and BORING(!) gymwear. Rendered in lightweight, sporty fabrics with UV- and moisture-protection designed for the guy on the go, pockets with closures so your gear doesn’t fall out, and tiny details like epaulets and contrast-piping, the design of the garments was well-thought-out and beyond your average casual sportswear. (above from left: Ready to Roll Matinee, Wyatt Orr, Keith McQueen jewelry, Lizzie Parker, Jonano – via Fashiontribes & OSI Imaging) 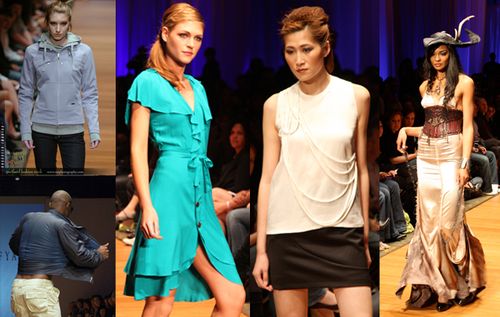 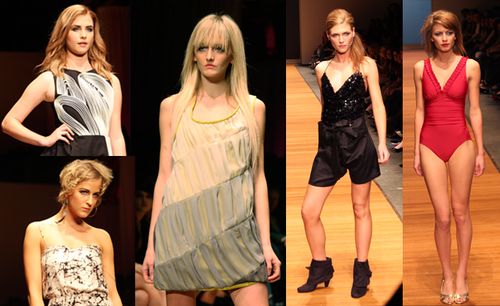 Friday standouts include local fave Idom (who showed at PFW last year) and Seattle-based Wyatt Orr. Idom’s intricate detailing on many pieces – breathtaking contrast piping undulating on the busts and rolled fabric roses at the shoulders – and the designer’s bold use of color proved popular. Wyatt Orr showed impeccably-tailored piped jackets for both men and women, ethereal chiffon dresses layered over neon slips, and a showstopping silvery dress with a large orange-rimmed circle cut out on the skirt. The rest of the night proved uneven, with collections lacking continuity and cohesiveness, but all pieces appeared very wearable. Jesica Milton, in particular, showed a gorgeous crinkle-print black-and-white fabric incorporated into a few of her chic dresses that was fashion-forward and utterly covetable. (from left: Idom, Jesica Milton, Wyatt Orr, Jason Matlo, Jantzen Swimwear) 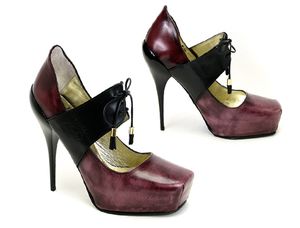 The Ready to Roll matinee on Saturday, sponsored by Momentum Magazine, featured everything for the bicycle enthusiast: frames, gear, helmets, bags, shoes…you name it, it came down the runway. Major industry players such as Raleigh, Brompton, local Nutcase Helmets and B. Spoke Tailors, as well as Fluevog Shoes (and their new line o
f vegan “Veggie Vogs”) wobbled down the runway on models who had been practicing on the trick bikes for 4 hours prior to the show. The evening show displayed a high quality of craftsmanship and a range of styling including Jantzen Swimwear (celebrating their 100th anniversary based in Portland); Canadian couture and red-carpet designer Jason Matlo and his sequined ready-to-wear party pieces; and Lizzie Parker, who only uses organic and sustainable fabrics for her whimsical, feminine dresses. (photo: the Fluevog Mitte Platform Stiletto) 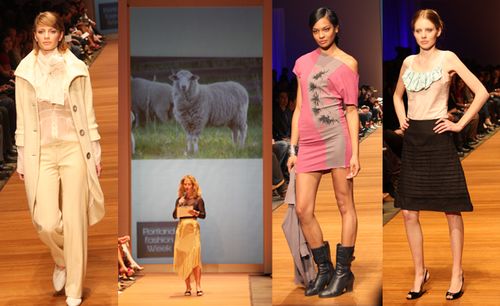 The day that was stole Portland’s heart was most certainly Sunday, when the eco-friendly, sustainable, and ethically-produced Collections were showcased. Pennsylvania-based Jonano and Mountains of the Moon of Chicago showed comfortable basics in subdued colors, interspersed with flirty dresses in pinks and botanical prints. Ethos Paris, a brand based in France founded on a “Trade Not Aid” motto, showcased work-friendly khakis and delicate yellow geometric prints – perfect for the coming season. The certified organic textiles for the clothing was sourced completely in developing nations: cotton from India, raffia from Madagascar, and alpaca from Bolivia. The company insists on paying fair market price for the raw goods and encourages partnerships with its suppliers and the preservation of local craftsmanship.

Finally, the evening’s much-anticipated highlight: local darling Anna Cohen and her new Imperial Collection featuring clothing made with wool sourced from the Imperial Stock Ranch of Central Oregon. The wool for the clothing was raised, sheared, carded, spun into fibers, knitted, loomed, woven, and the resulting textiles sewn ALL locally (i.e., within 100 miles of its origin) – thus keeping the environmental impact of production minimal. Hearing that the ranch’s wool production was threatened by dwindling domestic demand, Cohen – who has had pieces from previous collections featured in Lucky Magazine, The New York Times, and Vogue – embarked on a collaborative journey with the owners to manufacture a clothing collection utilizing the overstocked wool. In contrast to many of the drab browns seen earlier that night, this collection was awash in creams, reds, blacks, and tans; textured coats and sheer blouses, and silhouettes that proved flattering and feminine. (from left: Imperial Collection by Anna Cohen; the owner of the Imperial Stock Ranch of Central Oregon shares the history of the ranch; Jonano; Mountains of the Moon) 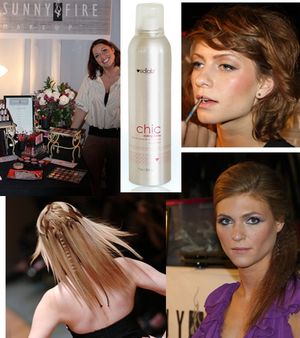 Hair was coiffed by Portland-based Sidlab Haircouture (who pioneered the paraben-free professional hair care line in the U.S.!), utilizing their Pacifica Sea Salt Spray to give texture and workability to overly-clean hair, and then finished with a spritz of Chic Styling Spray (both $24, EdwardWadsworth.com). Lead stylist Eric Alan Nelson also added small sections of crimping into the models’ sleek hairdos to break up the monotony and add some fun to the style. Sidlab’s sodium lareth sulfate-free and milk-silk protein-rich products are created and packaged on the West Coast in recyclable bottles displaying a pink ribbon to show the company’s support for breast cancer research – a perfect buy for October, National Breast Cancer Awareness Month!

As published on FashionTribes.com