Okay, so I’ve been back from Japan for less than a week and I’m about to go bonkers.

4 days after we get back my brother-in-law decides to drop in unexpectedly and stay for a week.

So since I’ve been back I’ve been trying to ignore my jetlag and frantically cleaning the house and fixing up the garden, to make space for him to stay (not that I’ve stuck him out in the garden, mind you heh heh heh- it’s just the house looked like a bomb hit it since Hub’s idea of unpacking is to upend both suitcases and spread everything all over the house instead of actually putting it away). It’s not that BIL cares very much – he’s easy-going and fun to be around – it’s just that I care, and a messy house and yard makes me look sloppy.

So to prove that, beyond an infinitesimal shadow of a doubt, I wore this to my son’s school registration day when I was forced to drive into downtown Portland and sit in a hot, sweaty gym for 3 hours listening to the head of school drone on about school policies and such – which are all spelled out in black and white in the school handbook. Doesn’t anyone read nowadays? 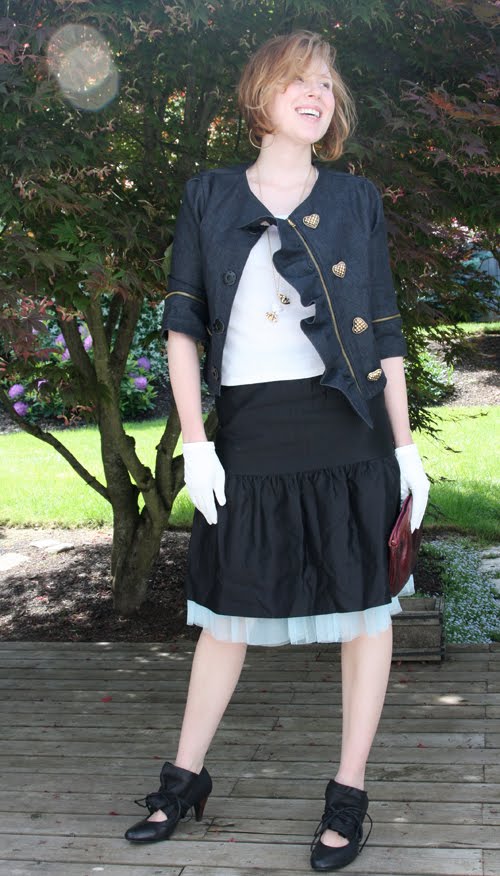 I whipped together this jacket in a couple days before I went on vacation. I didn’t use a pattern; just eyeballed it using a well-fitting jacket I already had as reference. This is made of a 2-way stretch denim, and it’s a bit too well-fitting, since I didn’t account for the stretch. In other words, the only thing that’s fitting under it is a really fitted tee or some latex body paint. (I’ll skip the body paint for the school registration meeting, methinks.) 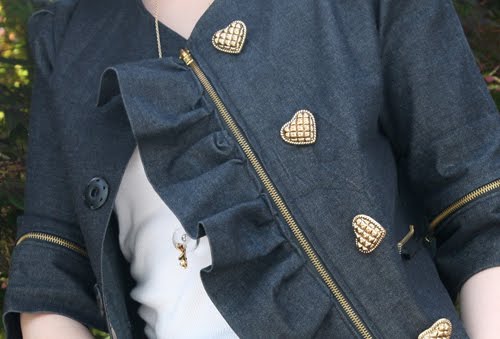 I made the jacket with zip-detailing that’s actually functional – just for kicks, I can zip off the ruffled front and sleeve cuffs and come up with…

A jacket that looks pretty much the same as the previous version.

LOL. (The asymmetrical hem and neck are actually intentional, though that little bobble at the top of the closure is not…I fixed it after this photo was taken, since I’m OCD like that. It also looks kinda puckery…I don’t have a steamer, and I’m scared to put it in the wash since it might shrink even more than the prewash I put the fabric thru. Ah well. A DIY fail?)

The Rachelle Dauphinee earrings I won from Lucky Magazine since I was apparently one of the first to download the Lucky widget one month. They’re simple hammered hoops but very beautiful – like $230 retail – the most expensive thing I’ve ever won from a magazine. 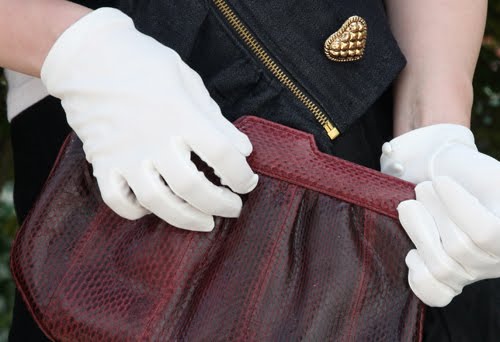 This crimson snake bag I found at a vintage store (I forget the name) on South Street in Philly. It’s made of real snake, and the scales are peeling in places (gross). I bought it a long time ago, and didn’t think it was real then, which was why I bought it. (I’ve developed a distaste for buying new things made from animal hides over the past couple years [though I’ll make an exception for cow/pig leather for shoes because honestly, in trendy shoe styles those leathers are pretty much impossible to avoid; fashionable vegan shoes are either horrendously pricey or cheap-looking and mass-made in China]…but since I own it and the snake is officially dead by now, I figure I at least should use it, even though I feel a bit guilty each time I do. I try to console myself that it’s vintage, so I’m at least giving this bag another life. Poor snake.)

The gloves I bought in Japan – they’re UV-protectant gloves that Hub said make me look like Michael Jackson – and I didn’t like the bracelet-length style, so I shortened them and added 2 little pearl buttons to make them look like a little vintage 40’s pair that the Portland vintage stores will charge $25 for. 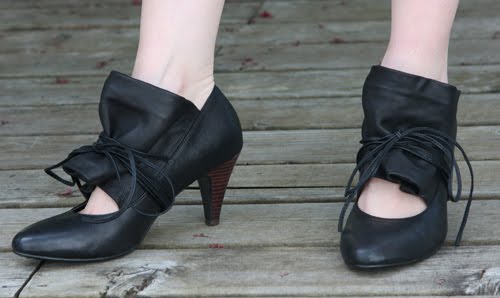 The shoes are QoJelly – a Japanese brand I’ve written about here – that I bought in Jan of 2008 at Harajuku LaForet in Tokyo. They have this loose band on the top that you can bind with long ties, which can also be worn a couple different ways. Spats for women!!

So anyway, all that griping about my brother-in-law at the beginning of this post was meant to convey that I have about 10,000 DIY projects ready to go and be photographed sitting right in front of me, and not a single spare millisecond to spend on them. 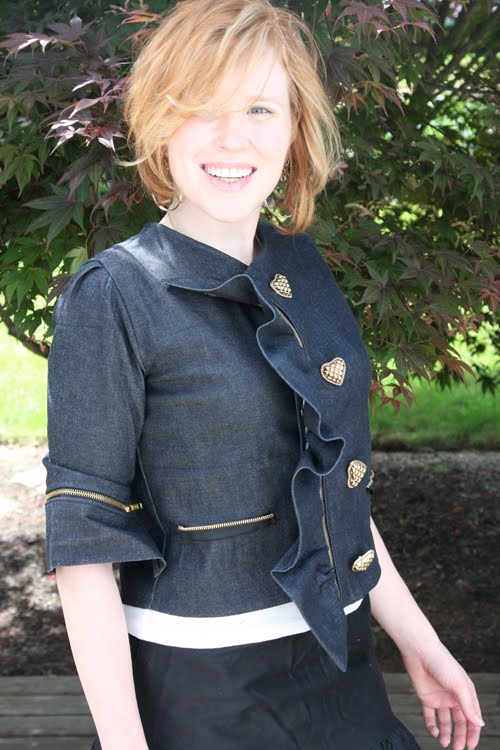 Like being at an all-you-can-eat dessert buffet without a spork.

I can’t wait to share them with you all…I promise I am working on them…I just have to get brother-in-law out of the garden and Little Tot shuffled off to school and Hub sequestered in his…Hub-space….and then I can go at. Promise! 🙂

Hope all of you had a fabulous August!
xoxox
Carly