[note: This was an article I wrote that was intended to post on FashionTribes.com sometime after New York Fashion Week. For unknown reasons, it never did. I felt really bad about that, and so wanted to post it on my blog to at least showcase the designer and his work, and publish the article, since I did spend some time on it. However, the information regarding the Ebay sale is now old news – so sorry to bore you guys!] 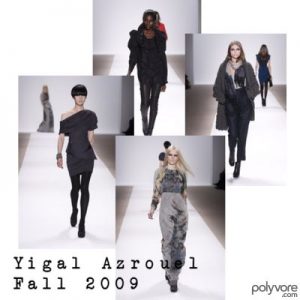 A name soon to be (if not already) on the lips of every fashionista in the know, Yigal Azrouël, chosen as Mercedes-Benz USA’s “Mercedes-Benz Presents” designer for Fall 2009, has a lot on his plate these days. Each Mercedes-Benz Fashion Week, a designer who demonstrates unparalleled talent, pace-setting style and the highest quality craftsmanship is chosen to receive this honor (past recipients include Badgley Mischka, Peter Som, and Chado Ralph Rucci). Mercedes-Benz supports and celebrates the chosen designer throughout the week through the sponsorship of their runway space, access to the VIP Star Lounge for hosting media receptions, and a charitable donation to a design educational program/school on behalf of the designer and the Mercedes-Benz Presents Designer program. Yigal Azrouel was selected this year for his fresh, modern designs, meticulous attention to detail, and appreciation of exquisite fabrics.
Besides the commitments of being sponsored this season, the designer also had not one but two shows to put on: the Menswear and the Women’s RTW Fall 2009 Collections shown at the tents.

He used a darkly romantic inspiration for the Womens’ collection, interspersing his trademark drapey dresses with leather pieces such as skinny pants and a studded jacket. Azrouel, best-known as a self-taught draping expert, said “Sometimes I don’t really know what I’m doing, but it comes out when I start draping. I’m a draping designer.” His designs have been worn by celebrities including Natalie Portman, Anne Hathaway and Jessica Alba. In addition to the shows, he also has two New York City brick-and-mortar boutiques: one in the Meatpacking District, and a second store that opened in Watermill in 2008.

If that weren’t enough on his dance card, the young designer also has entered into a partnership with eBay, where he plans to offer pieces from his Spring/Summer 2009 Collection for sale on the site this summer. Proceeds will be donated to the Natural Resources Defense Council, an organization that works to protect both wildlife and their habitats, ensuring a healthy environment for all life on earth. The charity sale (not standard eBay auction!), launching June 4 on eBay.com will offer all items at fixed, below-retail-prices. The drapey, feminine designs of his eponymous line will finally be available to women around the world who may not have had access to them previously.

Ultimately, both the pieces in the upcoming sale and those in the designer’s current collection display a fluidity and femininity, combined with an ease of wear and a chicness that elevates them beyond that same-old, same-old we tend to see so much nowadays. If you are in the New York area don’t hesitate to stop by one of the boutiques and try something on…you’re guaranteed to find something flattering and stylish…and if you don’t happen to live in New York there’s always the eBay sale starting June 4. 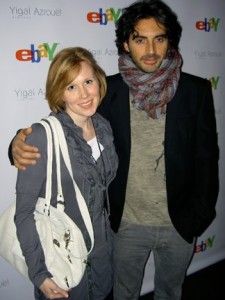 Designer Yigal Azrouel and some random girl hogging the photo op. The bag I made for Fashion Week also made the shot, apparently. Isn’t the Y.A. adorable??

Learn more about the designer and the collection at http://www.yigal-azrouel.com/